A year that began in a flash of Olympic glitz and glory is ending on a much darker note, amid an economic meltdown aggravated by plummeting oil prices and the tensest diplomatic standoff between Russia and the West since the Cold War.

Looking back upon a truly memorable year, The Moscow Times has compiled a list of the top six affairs that shaped Russia's foreign policy trajectory in 2014.

In hosting the 2014 Olympic Games in Sochi, Russia strived to present itself as a modern, attractive country bursting with opportunities. As spectators and athletes milled into the Olympic Park, they were greeted by a massive poster boasting the English-language logo: "Russia: Great, New, Open."

Despite the enormity of the effort — and it truly was enormous, ultimately costing Russia more than $50 billion — the attempted charm offensive failed.

Western media coverage of the games consisted of the occasional ounce of awe over Russian achievements, watered down by endless steams of condemnation over everything from corruption to gay rights and controversial policies, including the alleged mass extermination of stray dogs in Sochi.

The strongest indication that the Sochi Olympics lacked the desired outcome can be seen in how quickly the international community seems to have forgotten about them. But one detail of the games seems particularly notable in retrospect: U.S. President Barack Obama's decision to skip the games illustrates that relations between Moscow and Washington had already begun to pale well before the annexation of Crimea.

The crisis in Crimea will go down as one of the year's most crucial events worldwide. By annexing the Crimean Peninsula in March, Russian President Vladimir Putin boldly pushed his grip on power within Russia, as well as the country's relations with the West, past the point of no return.

Russia can back away from the conflict in Donbass, but it cannot do so with Crimea. Putin will never turn his back on the peninsula because he owes it so much political capital. After the annexation, his approval ratings within Russia surged to unparalleled highs — 81 percent of Russians still support the Crimea annexation, according to a poll conducted by the Levada Center last week.

But the West will not accept Russia's absorption of Crimea. Only 10 countries aside from Russia voted against a United Nations resolution in March condemning the move.

The annexation of Crimea was a manifestation of the many foreign policy grievances Russia has accumulated since the collapse of the Soviet Union. Crimea gave Moscow an opportunity to voice its frustrations with the current global order and to demonstrate its refusal to play second fiddle in the international arena.

The Crimea issue makes a win-win solution increasingly unlikely in the context of the Ukraine crisis. Putin cannot abandon his position on Crimea. Doing so would tarnish his credibility and popularity at home. Likewise, the EU cannot abandon its opposition to the annexation, as doing so would cast doubt over EU integrity, in light of its espoused rhetoric and values.

In stark contrast to Crimea, the situation in Ukraine's Donetsk and Luhansk regions rapidly deteriorated into a full-blown conflict, having claimed at least 4,700 lives so far, and displacing more than a million people, according to the latest UN figures, while some 814,000 of whom have made their way to Russia.

The unrest is likely to leave eastern Ukraine suspended among the other frozen post-Soviet conflicts. If the ongoing crises in the Caucuses and Moldova are any indication, the Ukraine conflict can on one hand be expected to torpedo Kiev's efforts to integrate into NATO and, on the other hand, pose some major obstacles on Moscow's path to establish a strong role in the new global order it desires.

The conflict in east Ukraine has already proved devastating, having resulted in the downing of Malaysia Airlines Flight MH17 in July, claiming the lives of all 298 passengers and crew members on board.

While Russia's Defense Ministry has indicated that Kiev's forces may bear the blame for the incident, Western media outlets have rallied around the version that pro-Russian separatists were responsible.

The tragedy proved to be a major political impetus in the West, inspiring politicians to rally behind sanctions against Russia. As a result, sanctions were imposed against Russian individuals, oil companies and banks, effectively cutting off their access to foreign capital. 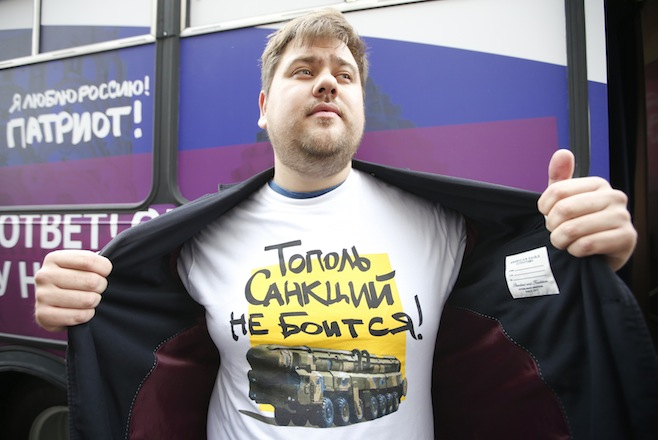 A man demonstrates a T-shirt as he takes part in a campaign organized by activists of pro-Kremlin patriotic movements in central Moscow. The T-shirt reads "Topol is not afraid of sanctions!". Topol-M is a Russian mobile missile launching unit.

While Russian officials initially wrote off Western sanctions as merely symbolic and irrelevant, by wintertime it became clear that they had dealt a significant blow to the Russian economy.

The most painful sanctions were imposed in the direct aftermath of the Crimea annexation and then the MH17 tragedy. Many were passed with a one-year deadline, so a key question that remains as the year draws to a close is whether the West in general and the EU in particular will remain united in the coming months as these deadlines draw near.

Thus far, Western sanctions have not had any visible impact on Russia's Ukraine policy.

But economic hardship looms, and as the financial crisis continues to spiral, Putin will find himself stretched increasingly thin between domestic patriotic fervor — spurred largely by state-run news on one hand and, on the other, the need to ease tensions abroad in a bid to bring foreign capital back into the country.

The ruble's dramatic plunge this week, paired with the Central Bank's interest rate hike on Tuesday, make these tasks even more urgent.

So far, Russia's pivot toward Asia has proven somewhat unproductive. Following the Crimea crisis, Putin toured much of Latin America and South and East Asia, seeking new markets within which to strike deals.

Natural gas deals with China, worth over $400 billion, will take years if not decades to take effect. Russia will also have to construct a pipeline, expected to cost somewhere between $55 billion and $100 billion, according to various estimates. The gas pipeline deal with Turkey that Putin signed during his visit to Ankara this month, will also take time to get under way.

It is clear that China, Turkey and even Russia's traditional ally India will exploit the Russia-West rift to their own advantage. This has been demonstrated by Chinese President Xi Jinping's 10-day tour of Central Asia, where he signed more than $40 billion worth of deals.

While India hosted Putin for a visit this month, the country's Prime Minister Narendra Modi has pivoted his foreign policy toward Japan, Australia and the U.S., whose President Barack Obama will visit the country next January.

As Russia's economy grows increasingly weak, Russia in general and Putin in particular risk becoming second-rate partners not only to the West, but to the East as well. 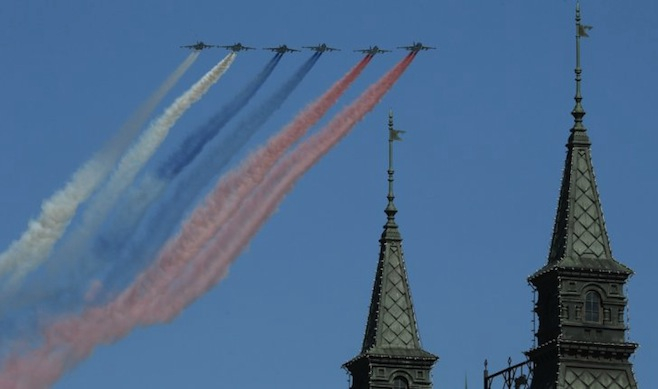 Russian military aircraft trail smoke in the colours of the Russian tricolor above the Victory Day Parade in Moscow's Red Square May 9, 2014.

For the time being, Russians appear largely to value national pride over economic prosperity.

More than 68 percent of Russians believe their country is currently "great," and 65 percent would prefer to live in a "vast country that is respected and feared," rather than "in a small and cozy country," according to a recent survey conducted by independent pollster the Levada Center.

Among respondents to the poll, 77 percent said Russia will only become a prosperous country if it pursues its own idiosyncratic methods of development, rejecting Western values in the process, while only 12 percent are in favor of a pro-Western path, according to the same survey.

These statistics demonstrate decisive shifts in Russians' perceptions of the outside world and their country's role in it over the past year. All Levada Center polls mentioned in this article were conducted among 1,600 people with the margin of error not exceeding 3.4 percent.

The EU's agreement to impose broad economic sanctions on Russia for its position on Ukraine threatens to stop off the trickle of affordable capital...
news

Speaking to hundreds of journalists from across Russia and around the globe in Moscow last Thursday, President Vladimir Putin reiterated his stance...
news

Triumphant in the midst of global condemnation, President Vladimir Putin clinked his champagne flute with sports leaders, toasting the success of his...