As pro-Russian separatists and official Kiev cobbled together a fragile cease-fire agreement last week, an international team of investigators put the finishing touches on a preliminary report on the downing of MH17. It did little to elucidate the tragic event, which many anticipated would serve as a game-changer in eastern Ukraine.

"A large number of high-energy objects that penetrated the aircraft from the outside," caused the Malaysia Airlines passenger jet to break apart high over the battlefields of Donetsk, killing all 298 passengers and crew members inside last July, according to the report.

These findings are consistent with the overarching hypothesis that emerged almost immediately after the crash that the jet was shot down by a missile that detonated before reaching the target and sprayed shrapnel over it.

The report stopped short of placing blame, assigning liability or disclosing evidence that would tip the scales in favor of either side of the ongoing Ukraine conflict.

The investigative team — comprised of representatives from Australia, Malaysia, Ukraine, Russia, Britain, the U.S. and the Netherlands — also made clear that they had not recovered components of the aircraft for forensic examination.

Their conclusions were thus based on photographic evidence and data obtained from flight recorders and air traffic controllers, as well as on personnel, aircraft and meteorological information.

The final report will be published within a year of the crash, meaning Kiev and the rebels — as well as Russia and the West — likely have months to continue spinning the catastrophe in their respective favors.

"Ukraine will say that the report provides evidence of the rebels' culpability. Russia will say that nothing is clear and that everybody is innocent until proven guilty. All sides will try to use the report to some extent, though not excessively as the whole topic is fading from public interest now," Alexei Makarkin, deputy director of Russian think-tank the Center for Political Technologies told The Moscow Times.

Independent military analyst Pavel Felgenhauer believes that the evidence proffered by the report makes a case for the theory that the rebels downed the plane with technical support from the Russian army.

"Today we know that there were no Ukrainian jets near the airliner, and that it was hit by a surface-to-air missile," he said in a phone interview.

"Theoretically any kind of anti-aircraft missile could have done this, but in practice only a Buk missile system was in the vicinity," he said.

The BBC's Panorama program reported on Monday that a Buk missile launcher was seen near the crash site mere hours before the Malaysian jet was hit. Three so-called "eye witnesses" told the BBC that the system had been operated by Russian nationals. By way of proof, the interviewees claimed the operators had "pure Russian accents."

Earlier reports also suggested that Buk missile systems were transported in the area at the time of the incident. An unidentified high-ranking rebel told the Associated Press that insurgents were responsible for the crash. According to other reports the plane was downed after being mistaken for a Ukrainian military transport plane.

Moscow has repeatedly denied any involvement in the crash, and also claimed it had evidence that a Su-25 Ukrainian air force jet had been cruising in proximity to the Malaysian plane.

"This investigation will not be able to yield conclusive results, as the investigators must come to Russia to do an inquiry here too. Russia will deny its involvement, so we will only find out the truth once there is a regime change in Moscow," Felgenhauer concluded. 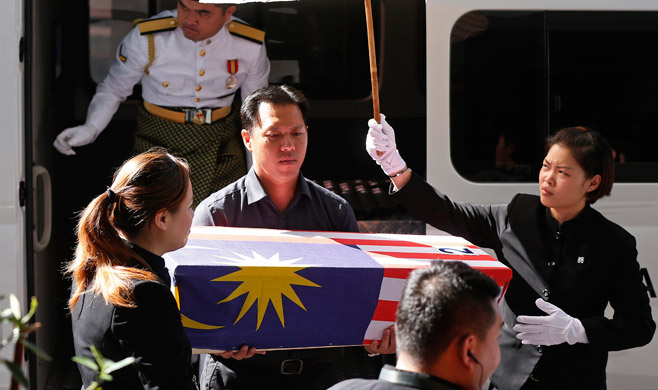 A man carrying the remains of his infant son, who was killed in the MH17 crash, in Kuala Lumpur on Tuesday.

Lack of Evidence 'Points to Ukraine'

Offering a perspective that stands in stark contrast to Felgenhauer's, retired Russian army Colonel Mikhail Khodarenok believes the fact that international investigators have thus far failed to provide conclusive evidence suggests that they have something to hide.

"You can find out what kind of missile was used against a downed plane one day after it was crashed," the retired colonel told The Moscow Times. During his career, Khodarenok operated S-75 and S-200 air defense systems.

"Each missile type has its own shrapnel imprint. The shrapnel should have been preserved in the elements of the aircraft itself as well as in the bodies of the victims," he said.

Khodarenok also pointed to the fact that a Buk missile would have hit the aircraft from above, while evidence suggests that it was hit from below. He explained that the missile system operates in such a way where a missile is shot up to great heights, and is designed to hit its target during its descent.

The preliminary report contains images of the fuselage from below the left cockpit window, the cockpit floor, and the cockpit roof, all indicating punctures caused by high-energy objects that penetrated the plane from the outside.

According to Khodarenok, the absence of meaningful clarity in the preliminary report provides the strongest evidence that the jet was not downed by the rebels.

"They do not want to conduct a full and serious investigation, as its results will question the official [Western] version that was declared almost immediately following the crash — that it was all Russia's doing," he said.

According to Yevgeny Miasnikov of the Center for Arms Control, Energy and Environmental Studies, the investigation is emblematic of the Ukraine crisis, where splinters of evidence are used to fuel politically motivated speculation.

"What we know is that the airliner was shot down. Everything else lacks substance," he said in a phone interview.

"The problem is that the public has no access to the evidence," he said.

A Dutch investigation into the downing of Flight MH17 over Ukraine has concluded the aircraft crashed due to "external causes" rather than a technical...
Active efforts