Visitors enter the exhibit of art duo CrocodilePOWER under the words "Russian Space." The words, written in white on black with a "Star Wars" style, hang on a large poster above the Triumph Gallery entrance.

Inside the gallery, deep red walls are lined with delicately decorated ceramic tiles, framed by a dark, spiky material that spreads out onto the walls.

Pyotr Goloshchapov and Oksana Simatova, who comprise CrocodilePOWER, were reluctant to use the Russian word for space, "cosmos," in the title of their show because it comes from Greek and implies harmony. "We wanted something more neutral, like a vacuum, and so the English word 'space' fit better," Simatova said.

"This project is about lost dreams," she said. "Everybody gets lost looking at the stars, looking to something far away that isn't getting you anywhere."

The exhibit plays with the story told, in illustrating the theory of relativity, of twin brothers. One heads into space while the other remains on earth. When the first returns to earth he will have a different time on his watch and will be younger than his brother, art critic Darya Borisenko wrote in the exhibit's catalog.

"Russian Space" is about the Russian present gazing into the sky in the hope that the "mythical cosmonaut" from the Russian heroic past will return, bringing with it a radiant future, Borisenko continues. "Currently Russian space is lamentable, it's future hopeless. It remains to appeal to the past to create the illusion that it is about to be reborn."

The exhibit looks at different conceptions of the world beyond in a number of ways starting with the tribute to the George Lucas epic film series as you come in. 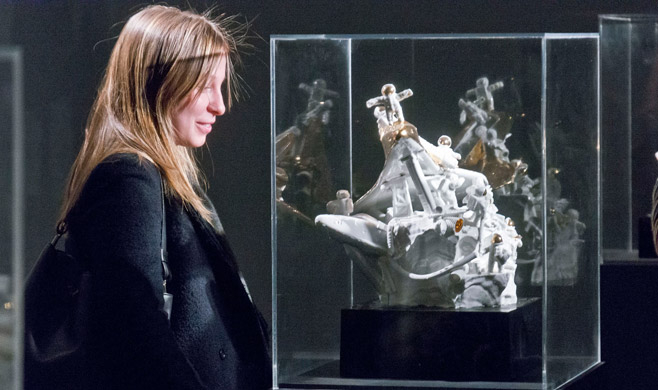 CrocodilePower has also created a series of gold and porcelain pieces.

"We chose to match the 'Star Wars' font because it is something from the past that is an anticlimax when we watch it now," Simatova said. "It is not like when we watched it in childhood. It is naive."

The ceramic tiles on display, showing astronauts in different settings, do not imply harmony. They are not reaching for the stars. Instead, there are scenes of destruction, one set of tiles shows spacemen engaged in what looks like trench warfare, others are distorted by surface cracks and burns. Some show spacemen not really pushing boundaries in space exploration: One takes a selfie, another is relaxing in an inflatable ring on a river as his comrades tend to a broken rocket in the background.

Spacemen appear again in a series of sculptures that seem elegant but upon closer inspection only show chaos. A porcelain rocket covered in gold has a host of spacemen around it. One is in mid-fall from the top, In another, the insides of rockets are exposed. The piece "Earth Greets Its Heroes" shows a sorry scene of broken white columns.

The artists' choice of porcelain and gold and the soft blue-and-white aesthetic are not insignificant.

The choice of material represents the contradictions in ideals, Borisenko said. "A drive for personal comfort lives in harmony with dreams of the Soviet colossus."

Goloshchapov and Simatova live in Krasnoznamyonsk, a "closed city" in the Moscow region that is a very distinctive Russian space. It also features in the exhibit. The town is guarded by soldiers, the art duo says, but it still has a gaping hole in the fence.

Downstairs in the exhibition, a video installation gives the viewer a rare chance to enter a closed city. A sofa is set up in front of the screen and a camera eerily floats around Krasnoznamyonsk, which remains closed today. In the film it is called "Science City N," representative of all the numerous closed cities in Russia.