Sergei Sorokoumov has devoted the last quarter of a century to an attempt to raise Russian's pride in the ruble, the country's national currency since the 13th century.

Recently Sorokoumov's efforts seem to have become a thankless task. The Russian currency has lost over 40 percent against the U.S. dollar this year despite the Central Bank spending over $70 billion of Russia's currency reserves in a bid to slow the plunge.

Dimitrovgrad, a southern Russia town near the Volga River, erected a statue to the ruble in 2004 on Sorokoumov's suggestion and aided by his links to the local mayor. Ten years later and Sorokoumov is campaigning for a similar monument to be put up in nearby Samara.

An official laying ceremony for the foundation stone was even planned for July, but the project has run into local opposition and is no longer likely to be realized.

As the ruble's devaluation becomes a priority for the Kremlin and begins to hit Russian consumers in the form of price rises, any chance of the project's revival appears slim.

"The ruble today is not properly valued and is not managed by those who have the interests of the people at heart," Sorokoumov, a retired Samara university professor and accountant by profession, told The Moscow Times in a telephone interview on Wednesday.

His work on the ruble, and the monuments in Dimitrovgrad and Samara, are all directed toward

boosting the ruble as a symbol and building popular belief in the currency, he said.

"When belief is lost, even the Central Bank cannot do anything," Sorokoumov said.

With its origins in the 13th century, the ruble is one of the oldest currencies in Europe.

The word itself is said to come from the Russian word юубить/rubit, meaning "to cut or chop," as rubles were originally bits of coins snipped off from the hryvna, the currency used by the medieval Kievan Rus.

Rubles were first minted as a currency in their own right in the 14th century — albeit by several small states in competition. In 1654, the first copper kopeks appeared. Following the sweeping monetary reforms of Peter the Great at the beginning of the 18th century, all rubles were minted with the figure of the reigning emperor or empress. In 1769, the first paper rubles were printed.

In the late 19th century, the reforming tsarist minister Sergei Witte brought Russia onto the gold standard, but the ruble came crashing down with the Russian Empire in 1917 and subsequent civil war. In 1917, a U.S. dollar was worth 11 rubles — by 1923 a dollar was worth more than 2 million rubles.

The Soviet authorities eventually regained their grip over the ruble, though the currency was only used internally. A special currency was used for foreign transactions, and the government 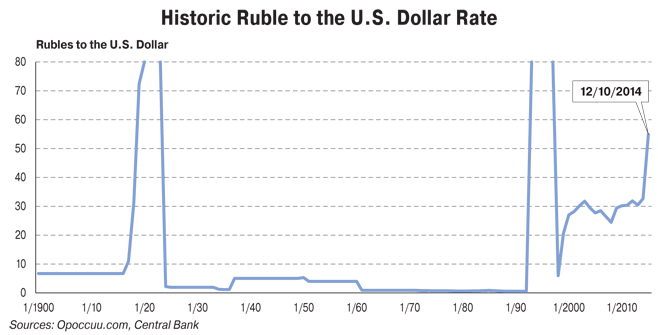 Russia has undergone at least four re-denominations in the last century, and recent ruble falls have sparked some tentative talk about another such move.

State Duma Deputy Roman Khudyakov suggested earlier this month that the currency could be re-denominated with little harm to ordinary Russians.

The call, however, elicited scorn from economists. Re-denomination in the current situation would be "pointless" and "totally stupid," said Konstantin Sonin, vice rector at the Higher School of Economics.

"If we had inflation of 1,000 percent a year then it would make sense to remove a few zeroes," he added. While inflation has ticked upward this year, the rate is still under 10 percent.

In 1998, three zeroes were lopped off the currency after rapid inflation.

Similar changes were made under the Soviet regime in 1947 and 1961 as well as in the so-called Pavlov reform of 1991 when Mikhail Gorbachev made higher-value ruble notes almost worthless overnight.

The approach of Russia's financial authorities to the ruble since the fall of the Soviet Union has been marked by attempts to control the currency's value — sometimes successful, sometimes not.

In 1998, Russia simply ran out of foreign currency reserves with which to defend the ruble — leading to a default and runaway inflation. The authorities took a similar approach, albeit more successful, during the global financial meltdown in 2008 when the Central Bank's committed about $200 billion to slow the currency's decline.

But last month, on Nov. 10, the Central Bank announced that the ruble would become a free-floating currency for the first time in modern Russian history.

As long as the Central Bank does not slide back into regular market interventions, a floating exchange rate means Russia's budget can more easily cope with a volatile oil price.

"The ruble is the most ancient symbol of Russian statehood," according to ruble historian Sorokoumov, adding that it is as important for Russia's identity as the Russian language.

Over recent years, Russian officials have sought to boost the ruble's profile on the world stage.

In 2009, then-President Dmitry Medvedev pushed for the ruble to become an international reserve currency, criticizing the world's dependence on the dollar.

The Kremlin has also pushed ahead with plans to forge a global financial center in Moscow, and last year the Central Bank launched an official symbol for the ruble.

But Sorokoumov lamented that more had not been done and warned that the current situation was very serious — similar to that experienced under the struggling Soviet Union in 1991 and tsarism in 1913 before the maelstrom of the First World War.

"If you want to kill a country, kill its currency," he said.

The weakness of the ruble is hurting Russia, which has lost tens of billions of dollars because of sanctions imposed by the West in the Ukraine...
news

Pressure is building on Russia's Central Bank to support the ruble via a big rise in interest rates at this week's policy meeting, as money markets price...
marking time