Disillusioned with the EU, European far-right parties have redoubled their efforts to swing Europe's political pendulum back toward Russia, which embodies their yearning for strong leadership and the preservation of traditional values. Russia, in turn, has its eye on using these political parties as a platform to influence European policymaking, pundits said.

National Front leader Marine Le Pen, who has publicly supported Russian President Vladimir Putin's stance on the annexation of Crimea and chided French authorities for stalling the delivery of an expensive Mistral-class helicopter carrier to Russia, denied that the loan constituted a friendly gesture by the Kremlin.

"These insinuations are outrageous and injurious," Le Pen said in comments carried by French newspaper Le Monde on Sunday. "Does getting a loan dictate our international position?"

Yet Le Pen's party — founded on an anti-immigration and socially conservative platform in 1972 — and other far-right European political organizations have made little effort to conceal their affinities toward Russia. In the case of the National Front, this mutual attraction openly manifested itself during party founder Jean-Marie Le Pen's first visit to Russia in 1991, where he crossed paths with the leader of the far-right LDPR party, the eccentric Vladimir Zhirinovsky.

"We adopted this [pro-Kremlin] stance a long time ago," Le Pen told Le Monde. "If an American bank would repay our loan, we would still maintain our position."

Russian authorities have consistently expressed their disdain for broadly defined "fascism," promoting a collective identity based on the Soviet Union's defeat of Nazi Germany in World War II. In an address to Russian lawmakers last March, Putin partly justified Russia's annexation of Crimea on the basis of the notion that authorities in Kiev were "nationalists, neo-Nazis, Russophobes and anti-Semites," and that he would not leave Crimea's ethnic Russian population in the hands of such leaders.

It would seem counterintuitive that the Kremlin — with its vocal anti-fascist stance and its public disregard for right-wing politics — has been cozying up to Europe's far-right parties, including those of France, Hungary, Bulgaria and Greece. Le Pen and a number other leaders of right-wing parties, including Gabor Vona of Hungary's Jobbik and Volen Siderov of Bulgaria's Ataka, have visited Russia and met with high-ranking officials in recent years. Far-right parties in 15 out of 21 European Union member states have openly professed sympathy toward Russia, according to the Budapest-based Political Capital Institute.

This seemingly improbable alliance has far less to do with Russia's anti-fascist state narrative than it does with mutual strategic interests, according to political pundits.

"There seems to be a strategic explanation of the phenomenon," said Alina Polyakova, a senior research fellow at the University of Bern who specializes in far-right movements in Europe. "Right-wing parties in Europe have vastly succeeded in dissociating themselves with fascist elements and have become mainstream through their Euroskeptic rhetoric, which has accompanied growing disillusion with the EU. Relationships with these parties serve as an opportunity for Russia to make EU policy toward it less cohesive." 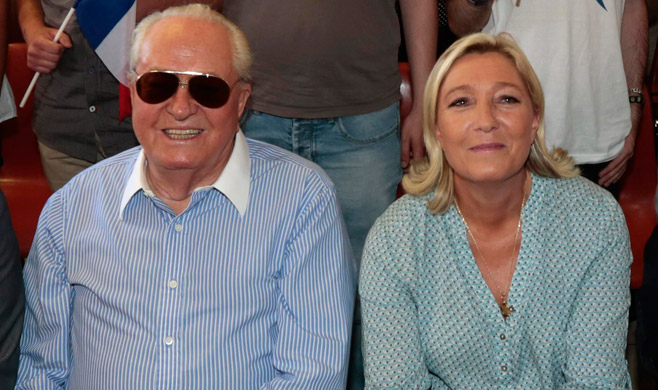 The National Front, which has reportedly already received 2 million euros from the First Czech-Russian Bank, said seeking a loan from the Russia-based financial institution was not the party's first choice.

"No bank — French or European — wants to lend us a cent," party treasurer Wallerand de Saint-Just told the France Info radio station on Saturday, adding that it was seeking "30 or 40 million euros" to cover campaign expenses for the 2017 legislative elections. "We would have preferred [getting a loan from] a French bank or a European bank, which would make it easier in terms of transportation and communication."

But as the cash-strapped National Front fulfills its need for funds from a Russian-based bank, Russian authorities win by deepening ties with right-wing parties, which they view as a springboard to influence European politics, said political analyst Alexander Tevdoy-Burmuli.

"For Russian authorities, this process is just about keeping ties going," Tevdoy-Burmuli, a professor at the Faculty of European Integration of Moscow State Institute of International Relations, told The Moscow Times. "Strengthening ties with these parties will not have an immediate effect, but in the longer term, they could be used by Russia to influence policy outcomes in Europe."

The prospect of Russia's infiltration into European policymaking became all the more convincing after far-right parties made substantial political gains in last May's European parliamentary elections. The National Front topped the French poll with nearly 25 percent of the vote, earning 23 seats in the European Parliament. According to a poll conducted by the French Institute of Public Opinion in October, Le Pen is currently the most popular potential candidate in the lead-up to the 2017 presidential elections.

Other right-wing parties, including Hungary's Jobbik and Greece's Golden Dawn, also made significant gains, respectively winning three and five seats in the European legislature after coming second in national voting.

"The loss of control of different aspects of state sovereignty, including fiscal policy, makes leaders of these [European right-wing] parties attracted to strong leaders," Polyakova said. "Far-right parties find the idea of a strong statesman, one who is not restricted by entities like the European Union, very inspirational in these circumstances."

Putin's defiance of the global establishment through his criticism of American and European policymaking has earned him supporters among the leaders of political parties disillusioned with the EU.

Siderov of Bulgaria's nationalist Ataka party came to Moscow in 2012 to celebrate Putin's 60th birthday. He said at the time that the EU ought to negotiate for Russia's accession, rather than Turkey's, Bulgarian media sources reported. Le Pen has also clearly demonstrated her admiration for Putin.

"We do not find [Putin's] qualities of courage, honesty, and respect of identity and civilization in other French political movements," Le Pen told Austrian newspaper Kurier in May, taking a subtle jab at French President Francois Hollande, the long-time leader of the country's Socialist Party.

Le Pen even said France should abandon NATO and form a military alliance with Russia along the Paris-Berlin-Moscow axis, which would represent the creation of a Pan-European Union that would include Russia. The party lists this notion as the first of its 11 key principles on foreign policy.

What the Kremlin's ties to right-wing parties lack in ideological objectives, they make up for with similar views on public morality and the role of tradition in modern society, pundits said.

Leaders of various European far-right parties have reiterated their support for Russia as a beacon of conservative Christian morality against rampant Western decadence.

Vona of Hungary's Jobbik party said at a lecture at the prestigious Moscow State University last year that Russia represents European values "much better" than Europe itself does because Russia "preserves its traditions and does not follow the culture of money and the masses," according to the party's website.

At his annual state of the nation address in December 2013, Putin asserted Russia's moral superiority over the West amid harsh criticism for the country's law banning the "propaganda of nontraditional sexual relations among minors," viewed by liberal Western government as an intrinsic violation of the rights and freedoms of the country's LGBT community.

"This destruction of traditional values from above not only leads to negative consequences for society, but is also essentially anti-democratic, since it is carried out on the basis of abstract, speculative ideas, contrary to the will of the majority," Putin said, referring to the West's review of its "norms of morality."

Russia's crusade against what Putin referred to as the "destruction of traditional values" — which includes its stance against gay rights and its crackdown on illegal migration — is in part what draws France's National Front and other European far-right parties to it.

Putin is "conscious that we are defending common values," Le Pen told Kurier. "These are the values of European civilization."

After nine months of non-stop German diplomacy to defuse the crisis in Ukraine, Chancellor Angela Merkel decided in mid November that a change of tack...
Ongoing Battle