The ruble slipped on Thursday, eating into gains made late in the previous session, as oil prices hit new lows and the market watched to see whether the Central Bank would be forced into more decisive action to defend the currency.

The currency has swung wildly in recent days, buoyed at times by statements from President Vladimir Putin and other government officials that Russia would defend the ruble.

The Central Bank floated the ruble on Monday and has discontinued its regular forex market interventions as part of a long-term policy shift to target inflation instead of defending the currency.

On Thursday, the bank's first deputy governor said the central bank had altered its interventions strategy to "reduce speculative pressure on the ruble."

Ksenia Yudayeva added the bank was against capital restrictions and that it was worth discussing with exporters how they sell their foreign currency earnings.

The ruble is down some 30 percent versus the dollar this year, as Western sanctions over the Ukraine crisis have made it harder for banks and companies to refinance debts and as tumbling oil prices have hurt government revenue. 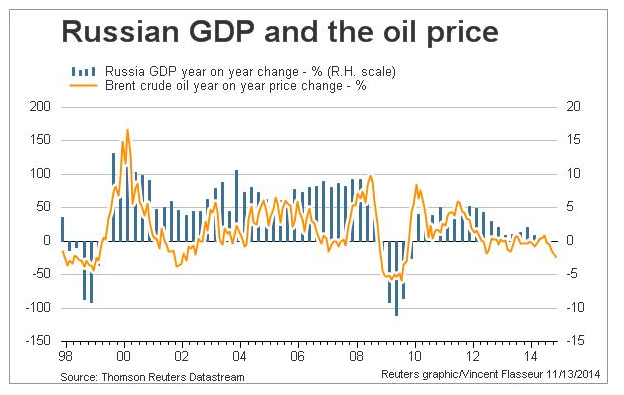 
"Market participants are guessing about the Central Bank's next policy step after heavy verbal interventions recently and the limit imposed on forex swap operations," Maxim Korovin, a forex analyst at VTB Capital, said in a note.

"In light of this, we think the ruble's relatively elevated volatility could persist in the near term."

Falling prices for benchmark Brent crude, which slipped below $80 a barrel on Thursday to a new four-year low, weighed on the ruble, as did signs that a cease-fire in eastern Ukraine was all but dead.

But hopes the approaching end-of-month tax period will encourage Russia's exporters to convert their foreign currency earnings into rubles at a relatively attractive rate kept losses in check.

"The current levels of 46.00 to 46.50 are relatively fair for the ruble given current oil prices and modest sales of forex earnings," said Pavel Demeshchik, a forex trader at ING Bank in Moscow.

"Oil will be the main fundamental factor influencing the intraday dynamics of the ruble, if there is a lack of news from the conflict zone in Ukraine."

Betting Against the Ruble Is a Dangerous Game

The ruble — or more precisely, the ruble-dollar exchange rate — continues to dominate headlines from Russia. Last Friday the ruble hit a record...
news