The Kremlin Cup tennis tournament winners' trophies were handed out in Moscow with great pomp and ceremony Sunday amid an international scandal sparked by Russian Tennis Federation head Shamil Tarpischev last week when he referred to U.S. female tennis stars Serena and Venus Williams as the "Williams brothers" during an appearance on a popular Russian late night talk show.

The Women's Tennis Association (WTA) ruled that Tarpischev — a member of the International Olympic Committee and the former personal coach of late Russian President Boris Yeltsin — would be fined $25,000, the maximum amount allowed by WTA rules, and suspended from any involvement with the association for one year.

Tarpischev, who also said that the Williams sisters were "scary to look at," explained that his on-air gaucherie was simply a "joke" and was not meant to offend. In a letter of apology published Friday on the WTA website, he said his remarks "were wrong and could be construed as discriminatory by the public."

Show host Ivan Urgant — Russia's equivalent of American television host Jimmy Fallon — went on to compare Serena Williams' muscular physique with that of Russian tennis players, who he said were "all slender and elegant."

WTA chair Stacey Allaster said Friday that Tarpischev's statements were "insulting, demeaning" and had no place in tennis. World No. 1 Serena Williams, one of the greatest female tennis players of all time who holds 18 singles Grand Slam titles, said that the slur was "very insensitive and extremely sexist as well as racist," and that she deemed it constituted a form of bullying.

While Tarpischev's words prompted outrage in international tennis circles, Russian sports authorities have shrugged off the "Williams brothers" scandal. Prominent Russian media outlets including Sovietsky Sport expressed disbelief at the WTA's decision, arguing that the longtime captain of the Russian Davis Cup and Federation Cup teams had been punished unfairly.

At the Kremlin Cup women's finals Sunday, representatives of the Russian Tennis Federation declined to comment on the incident.

"He [Tarpischev] is here, but I don't recommend that you try to find him," a representative of the Russian Tennis Federation told The Moscow Times.

Tarpischev was a notable absentee at the awards ceremony of the women's final on central court at Moscow's Olympic Stadium, but did speak after Croatia's Marin Cilic won the men's final against Spaniard Roberta Bautista Agut. No reference to the "Williams brothers" incident was made.

The winner of the tournament on the women's side, 23-year-old Anastasia Pavlyuchenkova — who beat Romania's Irina-Camelia Begu in three sets — thanked Tarpischev for his role in organizing the tournament, despite the 66-year-old legend's absence from the awards ceremony.

Upon hearing the household name of Russian tennis, the crowd erupted into applause.

"Shamil Tarpischev is the president of the Russian Tennis Federation and is recognized as an authority in the sport worldwide," Alexei Selivanenko, WTA tournament director for the Kremlin Cup, told The Moscow Times. "Everything else is unimportant." 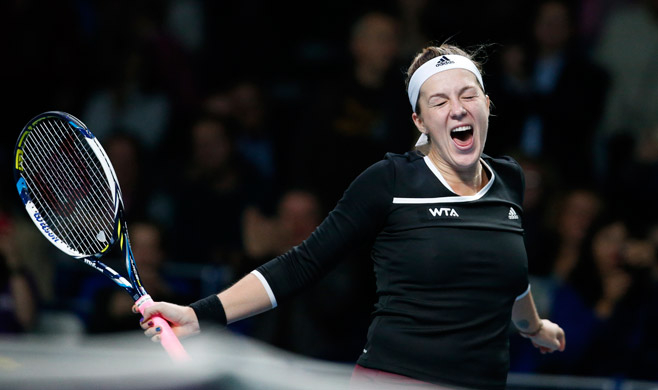 Russia’s Anastasia Pavlyuchenkova celebrates her win over Irina-Camelia Begu in the Kremlin Cup on Sunday.

Par for the Course

Earthy and at times offensive language has become commonplace among Russian officials in recent years, with remarks and language that would be viewed as sexist or racist in the West becoming standard parlance in Russia's political circles.

Like Tarpischev, President Vladimir Putin has sparked international outrage with his crude sense of humor — most recently on Friday, when in answer to a hypothetical question about oil prices at a news conference, the Russian leader answered: "If grandma had male genitals, she'd be grandpa."

Channeling his cult of masculinity and challenging Western standards of political correctness, Putin told French television in June that it was "better not to argue with women," referring to former U.S. Secretary of State Hillary Clinton, and said that "maybe weakness is not the worst quality in a woman."

In 2002, Putin lashed out at a French journalist who questioned Moscow's policy on the war-torn North Caucasus republic of Chechnya, inviting him to come to Russia to get circumcised if he wanted to become an Islamic radical.

Foreign Minister Sergei Lavrov confessed in 2012 that he "repeatedly" used foul language in diplomatic exchanges with non-Russian speakers. His ministry regularly releases strongly worded official statements that differ starkly from the measured missives of his Western counterparts and international organizations.

Russian lawmakers also seem to be playing follow-the-leader when it comes to coarse language and controversial statements. Last year State Duma deputy Irina Rodnina, also a three-time Olympic figure-skating champion, appeared to tweet a doctored picture of U.S. President Barack Obama and his wife Michelle that was altered to include a banana. The lawmaker, who lit the Olympic cauldron at the Sochi Games in February, later tweeted in English that her account had been hacked and that she did not endorse the picture. In Russian, she wrote that the picture was a manifestation of "freedom of speech."

Washington and Kiev say Moscow has massed troops near Ukraine's borders and accuse Russia of planning an invasion.
DEADLIEST MONTH

New figures show October 2021 was the worst month since the start of the coronavirus pandemic.

Tensions have skyrocketed in recent weeks over accusations of Russian military buildup around Ukraine.