Translators of Russian literature were honored at an award ceremony at Moscow's Pashkov House, where participants warned that international tensions over Ukraine were having an effect on the quiet work of translators too.

The Read Russia award ceremony on Saturday was hosted by former Culture Minister Mikhail Shvydkoi and took place at the end of an international translator congress, which saw dozens of participants sign a letter voicing their opposition to Russia's actions in Ukraine.

Pashkov House has a proud literary heritage, with a starring role in Mikhail Bulgakov's "Master and Margarita" so it was fitting that one of the winners was Alexander Nitzberg for translating that very book into German. He won in the category of "20th-century Russian literature [works written before 1990]."

Read Russia prizes are awarded to a translator or group of translators for outstanding translations of prose and poetry works from Russian into a foreign language, published by a foreign publisher, during the previous two years.

In the contemporary Russian literature nomination [works written after 1990] the prize went to Marian Schwartz for her translation of Leonid Yuzefovich's novel "Harlequin's Costume." Schwartz is a prominent translator of Russian books in the U.S. with more than 60 volumes of Russian classic and contemporary fiction, history, biography and criticism.

The detective novel set in St. Petersburg in the second half of the 19th century is the first in a trilogy based on a real-life figure, Chief Inspector Ivan Putilin.

"I thought it was so good and unlike most Russian books people had in America," said Shwartz, who translated the book on her own and then found a publisher, "I don't really have time for that but I liked it so much. [Yuzefovich] has got some wonderful books and is one of the most overlooked authors in English translation."

"I would say in America, every year, only about 10 translated Russian books are published," Schwartz said. "Many of those are small books, maybe poetry, available in small numbers."

"We have lost the tradition of even paying lip service to high culture, to literature, when they at least say, "literature is important" — not that they read it," said Schwartz, "In America, it is a big country but a small audience."

The situation with translations is better in Argentina, said Alejandro Ariel Gonzales, who won a prize for his translation of Fyodor Dostoevsky's novella "The Double."

"Argentina is a country of immigrants, which has always been closely tied to Europe," he said, "We can feel the Russian literary influence in our native literature. The first published novel by [famous Argentinian novelist] Julio Cortazar, The Winners (Los Premios), opens with an epigraph from Dostoevsky — a quote from 'The Idiot.' Another Argentinian author, Roberto Arlt, who is not well-known abroad, was even called 'Dostoevsky.' Works by playwright Leonid Andreyev were also very popular in Argentina in the 1970s." 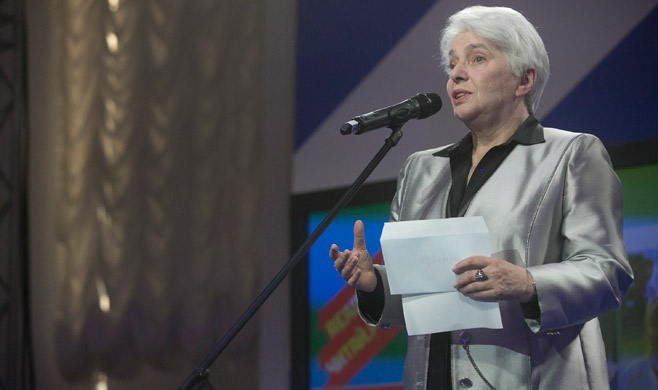 Natalya Solzhenitsyn making a speech at ceremony at Pashkov House.

Natalya Solzhenitsyn, a member of the Read Russia's board of trustees, believes that current trends are natural. If we talk about the classic works, they are "time-tested," and contemporary pieces are valuable and important as "a mirror we can look in, they register the current moment."

"But great literature is never born in turbulent times, but rather in more stagnant periods, when there is time to look around, think it over and comprehend," Solzhenitsyn said.

She emphasized that Read Russia's long list included 10 works by contemporary writers out of 32 titles competing for the prize, a third of the total.

Nevertheless it was contemporary ­issues, which were more on the minds of those at the ceremony.

The current political situation is awful and unprecedented, said Marina Boroditskaya, Russian translator and poet. More than 100 congress participants and their colleagues in the industry signed a petition of protest against Russian involvement in Ukraine — both military involvement and propaganda.

"Some of our foreign colleagues have already complained that publishers are reluctant to talk about new translations from Russian: "please do not bring Russian for now," Boroditskaya said.

Schwartz observed that in the Soviet times, much was translated from Russian in the U.S. "Many of the translated contemporary books then had some political element to them, which I did not appreciate at the time. And now I am also asking myself the question, "With these rising tensions, is this going to change the kind of literature that is published in America?"

Boroditskaya also felt uncertainty whether another congress will happen in the future, "given we are driven into a 'rogue state' situation."

Director of the Russian State Library of Foreign Literature Yekaterina Genieva read the final communique of the congress, which stressed the urgent need to promote humanitarian ties and support translation as a means of mutual understanding and communication.

"Today, with the rising international tensions and stronger threats to peace and human dignity provoked by the battle of geopolitical interests, it is crucial to prevent an unwinding of humanitarian ties, knowledge and idea exchange, which facilitate deeper mutual understanding between countries and cultures. Writers' word brought across languages with translators' help often proves more powerful than diplomatic documents and gun fires."