Several dozen people have gathered by the reinforced checkpoint at the entrance to the rebel-occupied special services (SBU) building here. It is 6 p.m, but the August heat is still stifling. The people, most of them women, wait in silence, their eyes downcast. They are waiting for The List.

"Is this the place where they read the list of captives?" I whisper to three women huddled on a small bench, a few steps away from numerous camouflage-clad guards with Kalashnikov assault rifles. "Have they taken someone from you too?" one of the women, Anna, whispers back.

When I explain that I am here to document illegal detentions, hostage-taking, and other abuses, two of the women jump up and walk away, merging with the crowd, but Anna stays put. "Yes, every night, between 6 and 7, an SBU representative comes out and reads the updated list of those who they're holding. They took my husband away last night. If he's being held here his name should be on the list. If not I'll just keep looking. They have such prisons in several other places around town. Also, they take some of the captives outside Donetsk."

Anna sighs, staring into space. In a soft monotone, she describes how she got home and found her husband missing and her apartment torn apart. Her neighbors told her that a group of armed men acting on behalf of the self-proclaimed Donetsk People's Republic (DNR) forced their way in, carried out a "search," took the family computer as well as some valuables, told her husband he was being "arrested," and drove off with him.

She thinks it is because he expressed some pro-Ukrainian views on social media. But she is even more frightened they might accuse him of being an informer for the Ukrainian army because he "often rode his bicycle to work and they just have this thing about bicycles and there are some unfriendly neighbors who could have reported him to the DNR, simply out of spite…."

It's 6:30 p.m. already. A DNR representative in rumpled fatigues approaches the gate from inside the yard, and people flatten themselves against the gate and one another, straining to get closer. He unfolds a two-page document, clears his throat and starts reading out names, stumbling over syllables. I count 55 names. "That's it," he says. For another few seconds, the crowd is silent, and then the silence is broken by a piercing scream, "I know my son is here! Why is his name not on the list? Why are you holding him? He's just 18! What did he do?" 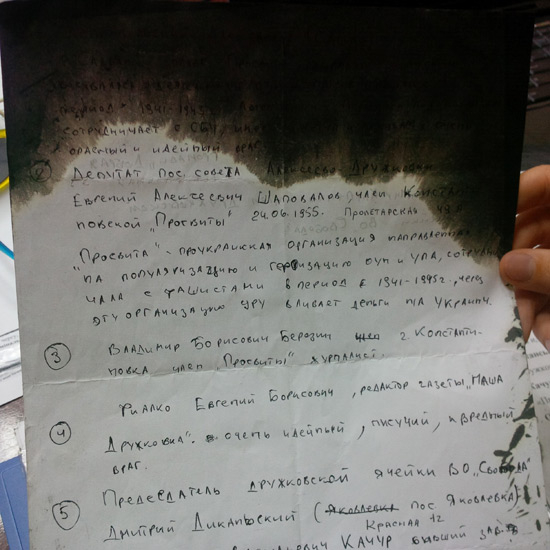 Half-burned list of individuals targeted for arrest in the DNR.

More questions are fired at the list-reader, who just shrugs and says his job is to read the list, not to provide explanations. He asks the relatives of those on the list, Anna among them, to stay for a few minutes and the rest to go home without making a fuss. He even sounds sympathetic, referring to the "severity of war time," reassuring the crowd that those on the list are treated well and suggesting that those who aren't on the list will be found sooner or later.

Some of the relatives who have learned from the list that their loved ones are in detention get no further information except, "If he was detained there must be a reason." Others learn that their family members were taken away for political reasons. Many learn that their relatives were rounded up simply for violating the curfew — being spotted outside between 11 p.m. and 6 a.m. — or walking around drunk. Their punishment is digging trenches at the front line or filling up sandbags at checkpoints for 10 days or several weeks, turning them into forced laborers. Anyone who's been through insurgent checkpoints around Donetsk has seen them.

When Anna finally walks away from the gate, her face is impassive, her eyes are staring blankly. She says the DNR representative did not have any specific information for her: merely that he husband is "under arrest" and they're "working on it." She adds, "I'll try to pass on a food parcel and some clothing to him tomorrow. They're saying it's not allowed but I've seen some people do it."

Sounds of shelling rumble from the outskirts of the city. She nods goodbye, and in the fading evening light her face reminds me of the two nurses I interviewed in a maternity ward several hours earlier. They had been caught in a shelling attack, apparently by Ukrainian forces, earlier this month and could not take shelter because they had to care for three premature newborns hooked up to IVs and oxygen. Their story is in no way similar to Anna's, but the terror in their eyes is the same.

Tanya Lokshina is a senior researcher at Human Rights Watch.