KIEV/DONETSK, Ukraine — Ukrainian forces have raised their national flag over a police station in the city of Luhansk, which was for months under rebel control, Kiev said Sunday, in what could be a breakthrough in Ukraine's efforts to crush pro-Moscow separatists.

Ukrainian officials allege, though, that the rebels are fighting a desperate rearguard action to hold on to Luhansk — which is their supply route into neighboring Russia — and say the flow of weapons and fighters from Russia has accelerated.

The foreign ministers of Ukraine and Russia were preparing to meet for talks on the conflict in Berlin on Sunday, though it seemed likely that the diplomacy could be overshadowed by fast-moving developments on the battlefield.

Russia denies helping the rebels and accuses Kiev, backed by the West, of triggering a humanitarian crisis through indiscriminate use of force against Russian speakers in eastern Ukraine who reject the Ukrainian government's rule.

Andriy Lysenko, a Ukrainian military spokesman, said government forces fought separatists in a neighborhood of the city of Luhansk on Saturday and took control of the Zhovtneviy neighborhood police station.

"They raised the state flag over it," Lysenko told a news briefing.

Separatist officials in Luhansk could not be reached by telephone, and a separatist spokeswoman in Donetsk, the other rebel stronghold in eastern Ukraine, said she did not know what had happened in Luhansk.

A photograph posted on Twitter appeared to show a Ukrainian flag on the front of the police station, but it could not be independently verified.

If confirmed, the taking of the police station is significant because the city of Luhansk has for several months been a rebel redoubt where Kiev's writ has not run.

Ukrainian troops have been closing in on the city from the outskirts, but had not previously been able to get forces inside the city limits. The separatists still control sections of the border linking the Luhansk region to Russia.

The four-month-old conflict in Ukraine's Russian-speaking east has reached a critical phase, with Kiev and Western governments watching nervously to see if Russia will intervene in support of the increasingly besieged rebels.

The rebels have responded to the reverses with defiant rhetoric, and the fighting continues.

Ukrainian authorities said Sunday that the separatists shot down a Ukrainian warplane. The pilot ejected and was located and recovered after a search, a military spokesman, Oleksiy Dmytrashkivsky, told Reuters.

On Saturday, Alexander Zakharchenko, prime minister of the self-proclaimed Donetsk People's Republic, said rebels were in the process of receiving some 150 armored vehicles, including 30 tanks, and 1,200 fighters trained in Russia. He said they planned to launch a major counter-offensive.

"They are joining at the most crucial moment," he said in a video recorded Friday.

The assertion that the fighters were trained in Russia is awkward for Moscow, which has repeatedly denied allegations from Kiev and its Western allies that it is providing material support to separatist fighters.

In a sign of concern at the latest rebel comments, German Chancellor Angela Merkel and Ukrainian President Petro Poroshenko agreed in a phone call Saturday that deliveries of weapons to separatists in Ukraine must stop and a cease-fire must be achieved, a German government spokesman said.

The Ukraine crisis has dragged relations between Russia and the West to their lowest point since the Cold War and set off a round of trade restrictions that are hurting struggling economies in both Russia and Europe. 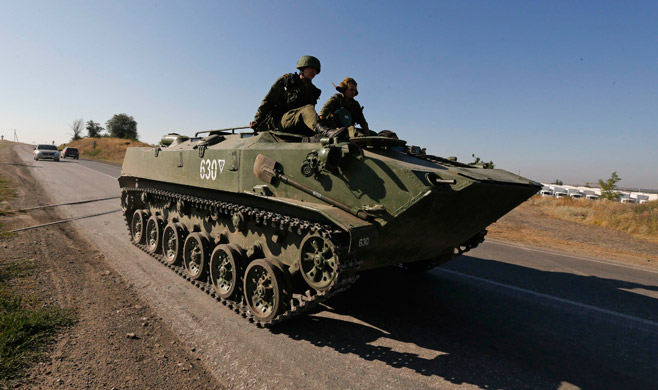 Russian servicemen driving a military vehicle along a road outside Kamensk-Shakhtinsky near the border with Ukraine on Sunday.

Adding to the tensions, Russia and Ukraine have been at loggerheads for days over a convoy of 280 Russian trucks carrying water, food and medicine.

It was despatched by Moscow bound for eastern Ukraine but has been parked up for several days in Russia near the border.

Kiev has said the convoy could be a Trojan Horse for Russia to get weapons to the rebels, a notion that Moscow has dismissed as absurd. It said the aid is desperately needed by civilians left without water and power and under constant bombardment from the Ukrainian advance.

After days of wrangling between Kiev and Moscow, there were signs of movement Sunday.

Sixteen trucks separated from the main convoy and drove into a Russian bus depot near a border crossing into Ukraine, a Reuters cameraman said from the scene.

The International Committee of the Red Cross said in Geneva that Russian and Ukrainian border guards and customs officials had agreed that the cargo could be inspected.

Ukrainian officials have painted a picture of a separatist force that is on the run and starting to panic, though rebel fighters Reuters reporters has spoken to in Donetsk say they are determined to stand firm.

The Ukrainian National Guard said its forces had seized a rebel field commander from the Luhansk region as well as 13 others suspected of "terrorist activity."

"The terrorists are putting on ordinary clothes, taking only their passport with them and are trying to pass themselves off as ordinary peaceful citizens on public transportation to try to get through the Ukrainian checkpoints," the National Guard said.

In the past week, three senior rebel leaders have been removed from their posts, pointing to mounting disagreement over how to turn the tide of the fighting back in their favor.

The fighting has taken a heavy human toll.

The United Nations said this month that an estimated 2,086 people, including civilians and combatants, had been killed in the conflict. That figure has nearly doubled since the end of July, when Ukrainian forces stepped up their offensive and fighting started in urban areas.

In Donetsk, which like Luhansk is now ringed by Kiev's forces, artillery fire has struck apartment buildings, killing and wounding residents, according to Reuters reporters. Officials in Kiev deny they are firing heavy weapons at residential areas.

Increasing military activity in the area poses dangers not only for critical infrastructure, but also nuclear waste stored at the site.
shadowy target

The attack comes less than a week after a pro-Kremlin war correspondent disclosed the base's location on Telegram.