Moscow's iconic Melnikov House has found itself embroiled in yet another property scandal following the forced eviction of the architect's 75-year-old granddaughter.

While pensioner Yekaterina Karinskaya was away at her dacha Wednesday, guards arrived at the famed house, just off the Old Arbat street, breaking down the door and sealing up the home, she claimed, adding that they also took off with valuables and a large sum of money.

Not one to be pushed into a corner, Karinskaya hustled her way past the guards on Wednesday evening, managing to get back into the house with the help of some friends.

"It is simply vandalism to go into a federal monument and break the door down," Karinskaya said in a telephone interview with The Moscow Times.

The dispute is over one of the most internationally acclaimed avant-garde homes in the world. Built in the late 1920s by Konstantin Melnikov, the house is made up of two interlocking cylinders with distinctive rhomboid windows that flood the house with light.

The house was one of the few homes that remained private in Soviet times, and was preserved first by Melnikov's son Viktor, who died in 2006, at which point Karinskaya took responsibility for the property in the hope that it would become a state museum.

Clementine Cecil, longtime campaigner for the house and head of architectural advocacy group Save Britain's Heritage, wrote to Irina Korobyna, head of Moscow's Schusev Architecture Museum, on Thursday to say she was "extremely concerned to hear about the forceful physical measures that were taken to secure access to the Melnikov House." 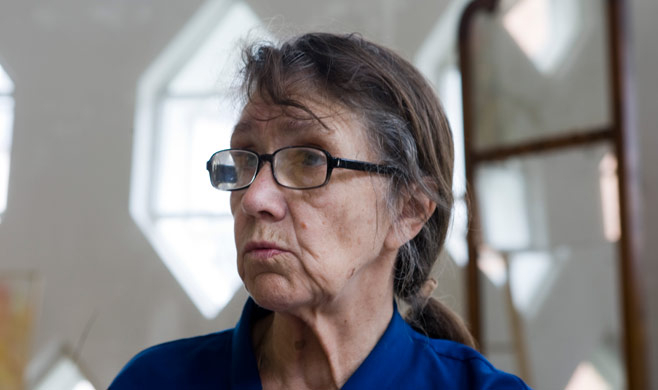 The architecture museum said in a press release Wednesday that Karinskaya's sister Yelena Melnikova had been named curator of the house, which they say is to become part of the museum, and that it would open its doors to visitors later this year.

It did not say anything about Karinskaya being locked out of the house.

Karinskaya was told that she no longer had a right to live there because of a 2006 eviction order, which she claims is no longer valid.

Melnikova has been gripped in a bitter legal battle for control of the house with her now-deceased father and her sister for more than a decade.

Melnikova turned up at the house with lawyers a few hours after her father's death in 2006 to try to claim ownership of the house, Karinskaya told The New York Times that year. Melnikova could not be reached for comment.

My husband was at home initially when the raid started, Karinskaya said. A policeman came first asking him to prove that he had a right to live there. He was taken to the police station and, while he was away, hired guards smashed their way into the house, she said.

Guards later refused to let her husband, who recently had a heart attack, back in or to hand over his medicine and he was taken to a hospital in an ambulance.

Two guards could be seen at the house Thursday evening. Karinskaya stood in the doorway smoking a cigarette and telling a reporter that the guards would not let any journalist come in to speak to her.

"I am on my own here. I have two guards here like a VIP," she said later by telephone from the house. The guards are treating her well, she said sympathetically: "My poor lads are sleeping on the couch." 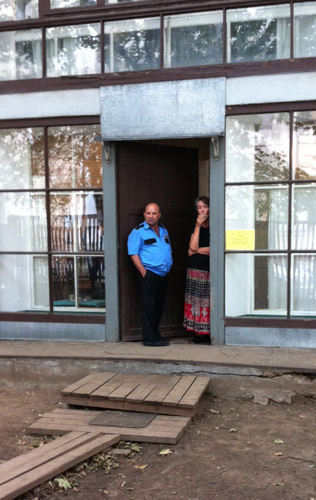 Karinskaya having a cigarette with one of her minders at the iconic house.

The architecture museum initially denied having taken any money, she said, but it was now admitting to having confiscated nearly $100,000. The museum refused to return it unless she could explain where she got the money from, she claimed.

At the property on Thursday, a man claiming to be employed by the private security firm hired to guard the house refused to give his name or the name of the firm he is working for, but he did say that the architecture museum had sealed the rooms of the house.

When asked how Karinskaya had managed to get inside the house, he said the septuagenarian had "entered a little bit illegally by using force," adding that about 15 to 20 of her supporters had helped her get past the guards. He said nothing had been taken from the house.

Preservation activist Cecil wrote that such forced entry would only likely lead to more court cases and less clarity around the status of the house. "It creates an unpleasant, murky and semi-legal atmosphere around the house.

"Whatever the museum of architecture is planning for the house, it seems to me to be vitally important to treat the elderly people living there with respect and dignity. Don't you agree?" Cecil wrote. "First and foremost this should be dealt with in a civilized way without resorting to violent means."

Architecture museum head Korobyna's phone was turned off Thursday and her e-mail address responded with a message saying she would only be back in Moscow on Sept 1.

Karinskaya says she will continue the fight for the house, even if it remains under guard. "I am under voluntary arrest," Karinskaya joked.