The State Duma's decision Wednesday to revoke Russia's right to invade Ukraine, made at President Vladimir's Putin's request, is hardly the first step to real peace.

Instead, it is part of a grander strategy in which Russia seeks to form an "arc of instability" in its post-Soviet states, discouraging the West from incorporating them while they struggle with frozen conflicts and domestic unrest.

The Kremlin's greatest aspiration is to reshape the current European security architecture and force the West to recognize post-Soviet space as Russia's zone of influence. Russia wants to become a veto holder, having the final say in every countries' move in this region. The Kremlin's revisionist policy, which harkens back to the Soviet Union, is a serious challenge for stability in Europe and one that is not fully understood by the West.

Moscow's interference in Ukraine is a logical consequence of its regional and global policies. Since the fall of the Soviet Union, Russia's influence in the region decreased significantly: once a major superpower capable of influencing political decisions in global politics, it now seems to be unable to control its own backyard.

The Baltic States, together with Poland and other countries, have joined the European Union and NATO. Georgia, Moldova and Ukraine, even during the tenure of Russian-backed Viktor Yanukovych, was and still is on the brink of signing an association agreement with the European Union.

But Ukraine, the seventh biggest country in Europe and a direct neighbor of Russia with a border of almost 2,300 kilometers, is by far the most important. Without Ukraine, as U.S. political strategist Zbigniew Brzezinski once noted, Russia ceases to be a Eurasian empire.

If the EU wants to keep Ukraine out of Russia's orbit, it should first learn Georgia's lesson. Putin's strategy in Ukraine, is, noting the difference in tactics, very similar to that of the 2008 war in Georgia.

The strategy basically consists of three steps. First, Russia uses military force to achieve its strategic goals while ignoring international reaction or condemnation. Second, it de-escalates its involvement. Third, it returns to business as usual with other countries by emphasizing the need to avoid any further mutual damage, economic or otherwise.

Russia successfully implemented this strategy during its 2008 war with Georgia. As the war began, Western countries were quick to denounce its actions. German Chancellor Angela Merkel diplomatically called Russia's invasion "disproportionate" or, as the Baltics and Poland labelled it, "aggressive" and "reprehensible."

Yet when Russian troops stopped moving forward and the Kremlin signed a cease-fire agreement with Georgia, mediated by French President Nicolas Sarkozy, the international community's perception of Russia rapidly improved. 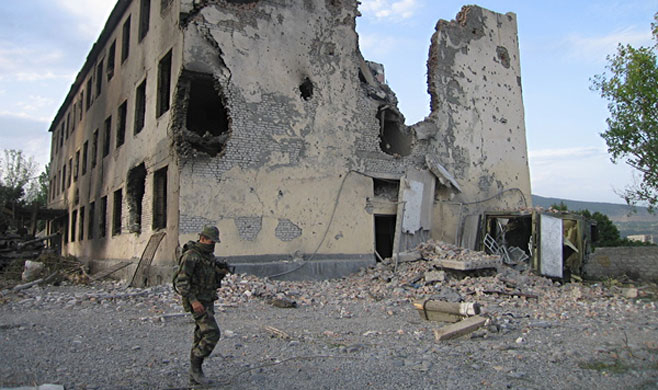 Even though Russia did not fulfill its obligations to withdraw its troops from occupied territories in Georgia and blocked further international attempts to settle the conflict in a mutually beneficial way, the EU resumed talks with Russia on a partnership agreement later in 2008. In other words, it was back to business as usual.

It is no surprise Putin is confident that this strategy may be repeated in Ukraine. After all, two of three steps have already taken place. First, Russia invaded Crimea, despite international condemnation. This achieved Russia's strategic objective of pushing Ukraine away from NATO. Now, Russia seeks to de-escalate the situation by publicly revoking the right it gave itself to invade eastern Ukraine and expressing support for Poroshenko's peace plan.

Yet the most important step is the last one. Will Russia be able to convince the West that further conflict will only lead to needless mutual damage?

From our perspective, the West should only normalize its relations with Russia after first significantly strengthening its own position.

The EU's inability to speak with one voice limits its response to the crisis in Ukraine. As one voice is hardly achievable due to very differing perceptions of relations with Russia between member states, the basic red line for getting back to business as usual in the EU-Russia relations must be drawn.

Russia cannot be granted veto power because this would mean accepting its zone of influence in the post-Soviet space. Association agreements must lead to integration, therefore the EU's Eastern Partnership Policy should be clearly recognized as a halfway point toward full-fledged membership for the most advanced partners. NATO enlargement should also be on the table for countries seeking it, with Georgian membership a top priority.

Moreover, military security should be strengthened in Central and Eastern Europe. It is commonly agreed that Crimea's annexation places the CEE region at a higher level of risk, and the region's military capabilities are far from satisfying.

Allied military bases could be deployed in the region at least temporarily to show that the West will not tolerate Russia's violation of the international rules. Also, the West should reconsider any commercial commitments that could strengthen Russia's military capabilities. France's decision not to suspend the sale of its four Mistral warships to Russia and train more than 400 Russian specialists is intolerable.

Finally, reducing the EU's dependence on Russia's energy resources should become a top priority. About 50 percent of Russia's budget are revenues from oil and gas exports. This is both Moscow's short-term strength and long-term weakness in relations with the EU.

All these steps would help European powers gain more strength in their relationship with Russia, and prevent Ukraine from becoming another Georgia.

The authors are policy analysts at Eastern Europe Studies Centre, a think tank based in Vilnius, Lithuania.

How 2022 Wiped Out a Decade of Progress in Russian Science

The story of Russian science in the 21st century is in many ways my own story too. When I entered the field as a student intern in 2005, science in Russia...
opinion Ronald Suny