MOSCOW — When Russia annexed the Black Sea peninsula of Crimea earlier this year, it regained not only harbors for its navy and abandoned Ukrainian military bases but also long stretches of pebble beaches that were the summer destination of choice for millions of Soviet citizens. This summer, however, tourists need a push to go and some help in getting there.

For years, two-thirds of the 6 million tourists traveling to Crimea each summer came from Ukraine. But many Ukrainians are still bitter over Russia's seizure of the peninsula as well as over local residents' submission to Russian rule; as a result, few are planning to vacation there this year.

But Russians are not rushing to go to the newest part of their country either. Some may prefer more luxurious destinations or be deterred by the difficulties of getting to Crimea, with land routes across southeastern Ukraine effectively blocked because of fighting between government troops and pro-Russian separatists.

With Crimea's beaches eerily empty at the start of the summer season and the livelihood of many under threat, the Kremlin has come up with an ingenious way to attract tourists to the peninsula: It has asked state-controlled companies to get their employees to go there on vacation by paying for all or part of their trips.

In the Soviet era, many state enterprises provided a summer vacation, known as a putyovka, for their employees. Organized by trade unions, these were either free or heavily subsidized. They were more readily available for industrial workers, particularly those who worked in harsh conditions and climates. Major enterprises owned sanitariums, leaving a legacy of magnificent "palaces for the workers" in seaside resorts across the former Soviet Union.

Some companies have kept sanitariums on the Russian Black Sea coast and still provide free summer vacations for some employees. Others sold theirs long ago but still subsidize their employees' summer travel.

Rostourism, the federal tourism agency, sent out letters last week to the country's biggest state-controlled corporations with a "suggestion" to buy package tours to Crimea for tens of thousands of employees.

Oksana Mashirova, who works for power company RusHydro in Moscow, said she was happy to sign up for a two-week subsidized trip to Crimea in late July. She has warm memories from childhood vacations on the peninsula, but has not been there for 15 years.

"I want to show my son Crimea's beautiful scenery," said Mashirova, 43. RusHydro provides subsidies for its employees' annual vacation and this year is offering higher subsidies for those vacationing in Crimea. The company says it expects about 6,000 of its employees to choose Crimea.

"It is impossible to force people to go there, of course, but it is a different thing when a company sends you on a free trip rather than you paying for a tour to Turkey," said Vladimir Kantorovich, first vice president of the Russian Association of Tour Operators. 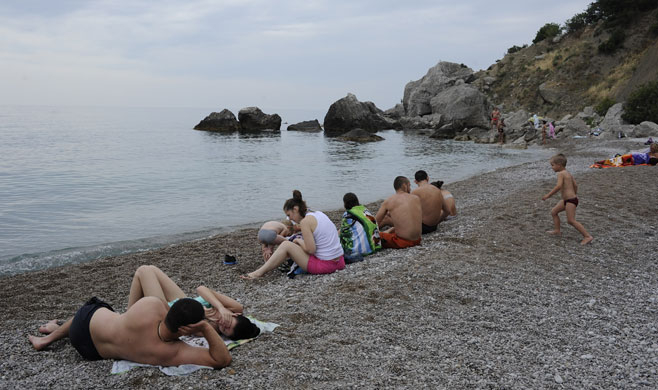 Russian tourists sunbathing on a Black Sea beach near Yalta on Sunday.

Increasing the pressure, the People's Front, a group that supports President Vladimir Putin and whose members serve as his representatives in the regions, last week poured scorn on several state-owned companies, calling them unpatriotic for providing subsidized package tours for their employees' children to travel abroad instead of within Russia.

"What kind of citizens are we going to make of these children who have been denied a chance to see our country and socialize with their peers from other regions?" the front's leader, Olga Timofeyeva, said in a statement.

But even the most patriotic Russian vacationer may have practical problems getting to Crimea. In past years, the bulk of the tourists, from Ukraine and Russia, traveled to Crimea by train. Out of about 2 million Russian tourists only about 300,000 flew to Crimea last year, according to Kantorovich.

With the unrest in southeastern Ukraine, the railroad connection from Russia has been effectively cut off. The Russian government has given subsidies to airline companies to provide cheaper tickets, while Aeroflot has made the Crimean capital the first destination of its new low-cost airline, offering return tickets as cheap as $58 return. A search on the airline's website, however, only showed tickets at $100 one way.

Crimea's capital, Simferopol, is served by a tiny airport and is 45 kilometers (27 miles) from the nearest coast. Roads on the peninsula, even those linking major cities, are often poorly paved.

And long term, Crimea needs a lot of investment if it is to attract Russia's increasingly worldly tourists.

Since the opening of Soviet borders 23 years ago, millions of Russians have discovered cheap package tours in Turkey and Egypt. And many have since preferred to avoid the perceivably overpriced travel and low-quality accommodation on the Russian and Ukrainian Black Sea coasts.

Crimea's landscapes may be breathtaking, but its infrastructure has largely remained unchanged since the fall of the Soviet Union, making it a destination for travelers with very basic needs.

As Putin put it during his televised call-in show in April, "coalminers used to go there and they did not care; they would knock back a glass [of vodka] and be off to the beach."

The government may continue to prod the country's largest taxpayers to pay for Crimean vacations, but this is not going to help to restore the region's economy, Russia's respected business daily Vedomosti said in an opinion piece last week, describing the Kremlin's order as an example of a throwback to the Soviet command economy.

"State corporations and major companies will fund Crimean vacations for their employees, but what happens next?" Vedomosti's Andrei Sinitsyn wrote. "A long-term show of loyalty requires serious calculation beforehand. Once again, either the government will assume the losses or they will burden the businesses."

Crimean Hoteliers Fight to Save their Livelihoods at Moscow Tourism Show

Sputnik V's backers said the Omicron-adapted version of the vaccine "can be ready for mass-scale production in 45 days."
FAILURE TO PERSUADE

Even as the country’s excess mortality remains among the world’s highest, many Russians are refusing to accept new public health restrictions.
advanced arms

Russia, the United States, France and China have all been experimenting with so-called hypersonic glide vehicles.
posting over