Demolition men have flattened 1,451 of Moscow's Khrushchevki — cheaply built 1950's apartment blocks that were never meant to make it into the 21st century — in the last 15 years, as part of a foundering plan by ex-Mayor Yury Luzhkov to freshen up residential areas, the head of construction at City Hall said Monday.

In total, 114 blocks will be knocked down this year — 93 at the expense of the city budget and 21 by investors in construction — thereby wrapping up work in five of Moscow's 12 administrative districts. Moscow's construction chief Andrei Bochkaryov told Vedomosti that by the beginning of 2016, no more than 30 of the architectural relics should remain.

The demolition drive should have been wrapped up four years ago, but due to the economic crisis of 2009 and changes in housing legislation, 271 of the doomed five-story apartment blocks still stand. Bochkaryov is contrite — "Muscovites who have been promised rehousing should not have to suffer because someone has not fulfilled their responsibilities," he said.

Suffering is the word. Khrushchevki were built at breakneck speed in the late-1950s and early 1960s — during Nikita Khrushchev's leadership — to satisfy the rapidly growing demand for housing in Moscow and throughout the Soviet Union. Usually built from scratch in as little as 45 to 50 days, they were only meant to last for 25 years, but many have stood for twice as long, turning into dilapidated eyesores.

The outdated technology used during construction rendered the apartment blocks unsuitable for renovation, and in 1999, then-Mayor Yury Luzhkov ordered 1,722 of them to be razed by 2010. The authorities stipulated that the apartment blocks could only be torn down and replaced after its residents had been moved into new housing.

The most productive period was between 2006 and 2007 — just before the 2008 to 2009 economic crisis decimated the Russian economy — when 680 were knocked down. By 2009 the plan was 70 percent complete, but it struggled to recover its momentum as Russia emerged from recession. Only 48 were demolished in 2010, and 31 the following year, as developers labored to cope with the responsibility of rehousing people. 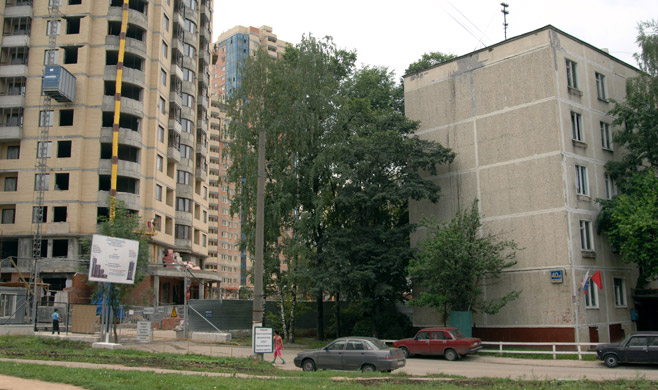 Moscow’s old five-story apartment blocks are being phased out steadily.

Oleg Repchenko, head of the analytical center at real estate company IRN, told the paper that investors are still shaken by the crisis and don't want to take risks, whereas in 2008 they were fully confident that their construction projects would yield returns. "Few believe that the value of real estate will grow. On the contrary, many are worried that it will start to get cheaper," Repchenko said.

Amendments made to housing legislation in 2013 also stopped the wrecking balls from swinging quite as regularly, as Moscow authorities were forbidden from assigning land to developers without conducting a tender. Of the 23 companies that have been involved in the demolition project at some stage, only five have renewed their contracts with City Hall.

Remstroitrest is one of the remaining investment and construction companies to have a contract. It has been a partner of the city since 1996 and is now investing about 15 billion rubles ($437 million) in nine apartment blocks in the Obruchevsky district in southwest Moscow. It plans to finish the project by 2017. Those who wish to return to their old address once the new property has built are often priced out, but Remstroitrest has set aside 30 percent of the new apartments for prospective returnees to bid on at a lower price. The remaining 70 percent can be put on the market at whatever price the company sees fit.

Repchenko said that the burden of rehousing residents is another reason investors have shied away in recent times.

Part of the problem is having to deal with the residents who will be displaced by the demolition. They could flatly refuse to leave or issue demands that would make the project unprofitable for the developer, and that can drag out the length of the project. Those risks could be swallowed when the market was booming, but the slowdown changes the logic.

"Investors will try to fulfill their existing obligations to the city, but hardly any will want to take on more work," he said.