Your beloved mother has died, leaving you in a state of grief just short of catatonic. Who do you call? Many Muscovites will tell you it was not really who you call that matters — it was who the police, the dispatcher or the medics call: the funeral agents.

Because that is when the onslaught begins and funeral service providers "prey on the grieving," respondents to an informal survey conducted by The Moscow Times this week said.

"Together with the police — who arrive immediately — even before the medics arrive some strange man appears, who starts prowling around the apartment and at some point starts trying to force funeral services on you," said Dmitry Zaika, a production editor living in Moscow. "If you ask him to show ID or leave a telephone number, he gets spooked and leaves. In other words, the police help the shady profiteers."

This mysterious man is part of a standard procedure in which funeral service providers are informed of a death even before the coroner arrives, those surveyed said.

Usually, they said, it is the police officer who arrives first on the scene, the medics or the dispatcher at the emergency call center who informs the funeral services company that they have got a potential new client.

An ambulance worker working in Moscow who declined to give her name for fear of reprisal told The Moscow Times that police officers tend to be responsible for information leaks about recent deaths. Ambulance workers try not to get involved, she said.

A request for comment from the police's press service was left unanswered.

Selling information about recent deaths to agents is a business that rakes in more than 1 billion rubles ($28 million) annually, or 20,000 rubles ($570) on average per dead person, Alexei Suloyev, vice president of the Russian Union of Burial Organizations and Crematoriums, told journalists earlier this week.

Yelena Andreyeva, acting director of the Union of Funeral Organizations and Crematoriums, said in comments to Lenta.ru last week that such a trend of medical workers apparently working in cahoots with funeral agents was alarming due to the obvious conflict of interest.

Moscow's Chamber of Commerce and Industry released a detailed report last November that presented the same conclusion, saying "the medical institution meant to cure [the patient] is making money off of death."

Thriving in a Legal Vacuum

The lack of oversight in the funeral services industry acknowledged by government officials and the lack of proper regulation mean it is happy hunting for the thousands of unofficial funeral agents angling to get a piece of the pie.

In this booming industry, the largest concentration of funeral agencies is in Moscow, with 2,500 such companies offering burial services, according to Suloyev.

"If in France or Germany there is one, one-and-a-half agents per deceased person, there are eight in Moscow," Suloyev was quoted by Interfax as saying. This is the highest rate in the world, he said.

The reason is that if in Europe, funeral companies have to obtain licenses to enter the market, in Russia entry is effectively free of any regulation, he said.

This fertile ground for corruption has spurred officials to take action for tighter regulation, but so far to no avail.

A bill was submitted last month by United Russia Deputy Mikhail Moiseyev seeking to oblige funeral bureaus to get licences, a move that would likely put some of the unqualified and unscrupulous agents out of business.

As things stand, only 20 funeral bureaus are legally registered in the city, Alexei Nemeryuk, head of the city's trade and services department, said in comments to Lenta.ru last week.

The remaining 2,500 are "black agents," meaning they do not belong to any legal body and lack qualifications and training, as well as proper equipment.

Describing the problems inherent in the current overabundance of unofficial funeral service providers, Nemeryuk said in an interview to Komsomolskaya Pravda last fall: "The funeral agents go from apartment to apartment [looking for clients.] What if one of the deceased has tuberculosis? A company in this sphere should work in accordance with clear set rules, in a normal office instead of someone's apartment. … So that, for example, you do not have someone transporting bread in their car by day, and a body in it by night."

Suloyev said that 40 percent of the funeral agents do not have any special training in this trade.

Kickbacks at Every Stage

Pavel, an office worker who declined to give his surname, arranged the funeral of his brother in the Moscow region recently and described burial agents as "soulless realtors, only instead of arranging someone's move into an apartment, they are moving them into a grave."

"They sometimes take advantage of the fact that people in a state of shock cannot do elementary things," he told The Moscow Times. "They do not hold back from asking for large sums of money to transport the death certificate to where it needs to go."

Others said they had witnessed signs that the city's morgues were also mired in schemes for making extra profit. 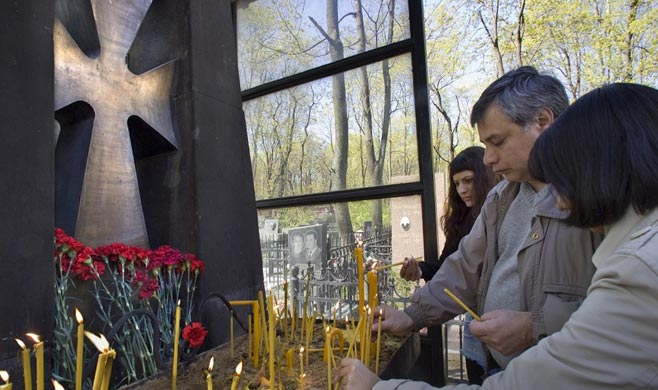 Grieving relatives are vulnerable to exploitation by unscrupulous firms.

Anastasia Yakusheva, a Muscovite who works in advertising, said that a city morgue once hinted at a need for "additional payment" for storing her relative's body for more than three days, although by law, the morgue was required to hold it longer.

Other common "problems" often encountered in the burial process include things like, "There is some backup at the morgue and to get your mother's body out in a timely fashion, we may need an additional fee," or: "If you want the grave site to look presentable — it is your mother after all — we will need a bit more money to get rid of these weeds."

Several Moscow funeral agencies contacted by The Moscow Times declined to comment on whether or not such schemes were common.

A man identified as the general director of the firm RitualPlus by an employee of the firm said he saw no major problems in the industry, at least no more than there are in any other industries.

He conceded that the grave-diggers probably asked grieving clients for small bribes from time to time, but noted that such an occurrence is inevitable when so many people are involved in providing funeral services.

Giving his name only as Ivan, he hung up when asked to provide a surname.

Another problem cited by officials is the iron grip that one company — the state unitary enterprise Ritual — has over the entire industry, with all of the graveyards in Moscow at its disposal.

Several Moscow residents interviewed for this story agreed that each morgue has a single funeral services company to which it directs clients. Usually, it is a company that makes up part of Ritual.

Since there is no government oversight of the business and funeral companies so easily exploit the shock of the bereaved relatives, clients often have no way of knowing if they are being ripped off.

The funeral-related data from Moscow City Hall's department of trade and services puts the average cost of services provided by the funeral agent at 20,000 rubles ($570). The average monthly salary in Moscow hovered near 55,000 rubles ($1,570) in 2014, according to the State Statistics Committee.

But the figure of 20,000 rubles excludes transportation of the body, the processing of documents, embalming and medical work on the body of the deceased, the coffin, wreaths and decorations, religious services, preparation of the grave site and the replacement or erection of tombstones. All of this, on average, adds up to around 150,000 rubles ($4,300), according to the department, but there is plenty of leeway for workers to ask for kickbacks in the process.

"The cemetery has its own funeral agent that it forces on everyone, warning of 'possible problems connected with other companies that there is no guarantee will be solved' and saying they have the absolute lowest prices," said Larisa de Belder, a sales manager.

Add to that the fact that there is simply no space left in the city's cemeteries, and there is ample room for con artists to elbow their way in, sometimes offering burials in unattended grave sites for astronomical sums.

A video posted on the online news portal Moskva 24 posted last March showed one such conman trying to sell a plot in the prestigious Vagankovskoye Cemetery in central Moscow for nearly 2 million rubles ($57,000).

This "burial broker" would have likely disappeared after receiving the money from the client. A warning posted on Ritual's official website alerted clients to such scams and said they were quite common.

While Nemeryuk of City Hall's trade department said the initiative to impose licensing on funeral agents would make it more difficult for such con artists to operate, Andreyeva of the Union of Funeral Organizations and Crematoriums, who was unavailable for comments Tuesday, said in recent remarks to Lenta.ru that the current legislative initiative to crack down on funeral service providers was not enough to guarantee improvement in the industry.

"Moscow and the Moscow region, where the problem is the most acute, require immediate solutions. But they need a more detailed refinement of the requirements and standards fixed on a legislative level, as well as responsibility for fulfilling these requirements," Andreyeva said.

Today's funeral services industry "is basically run by bums from the graveyards" because the law regulating the industry is so out of date, she said.