The Melnikov House burned bright on the warm May evening. Through its iconic hexagonal windows, the flames could be seen growing stronger and stronger. Smoke rose into the sky and as the temperature inside the house soared, the walls began to visibly warp.

Yekaterina Karinskaya, the granddaughter of architect Konstantin Melnikov, who built the avant-garde house in the 1920s, stood close by chewing calmly on some pork that had been cooked with the heat of the burning building.

This was not the actual house consisting of two intersecting cylindrical towers that Melnikov built as a combined home and studio, but a 1.5-meter-high metal model of it created by French artist Xavier Veilhan for a one-off performance.

A small group of people were invited to the garden of the real Melnikov House, located on a small side street off Arbat in central Moscow, to watch the miniature house burn in an event that even Veilhan described as strange.

The immolation was part of his "Architectones" series, which has seen him install specially created art in iconic modern buildings and help them raise money for their restoration or renovation.

The artist has gained access to grand, classic houses in Los Angeles — including the Sheats-Goldstein House, which featured in the movies "The Big Lebowski" and "Charlie's Angels" — as well as to Le Corbusier's modernist Cite Radieuse in Marseille and even to a church, the Sainte-Bernadette du Banlay in Nevers, France.

Burning the Melnikov House in its garden was the most difficult project to bring about, however.

"It was easier to make something in a church than in here," he said.

Karinskaya stood at the gate of her unusual home to greet guests as they arrived for the evening event. Asked what was going to happen, she shrugged with a look of incomprehension on her face.

Not in My House

Initially, Veilhan wanted to stage a project inside the house, but he soon realized that that would be impossible. Just like her father before her, Karinskaya has preserved the house's appearance, and little has changed since the architect died in 1974.

His granddaughter has battled for years to save the house, whose walls have developed cracks that she says are the result of large-scale construction nearby. The building was placed under federal government protection earlier this year, and is set to become a branch of the Schusev State Museum of Architecture.

"Yekaterina didn't want me to do anything," said Veilhan. "She is in the position of preserving the house and I don't think she really got it."

Luckily the two had a mutual acquaintance: Jean-Louis Cohen, one of the world's leading experts on constructivist architecture, who last year curated an exhibit devoted to Le Corbusier at New York's Museum of Modern Art. Cohen has regularly visited the Melnikov House and spoken in support of it.

"Jean-Louis came here and told her about me and she said, 'OK, cool,'" Veilhan said.

As part of the project, the artist will make a donation toward the preservation of the house.

In the garden, he began to feed the fire with a pile of wood collected from the grounds.

As the flames grew, white smoke drifted up in front of the real house from the metal copy. Still, an air of skepticism remained. "His idea is not really clear to me," said author and historian Olga Alexandrovskaya as she watched the fire take hold.

But then things slowly started to change. Maria Troshina from Vkhutemas Gallery arrived. A board was placed on top of a wheelbarrow near the mini Melnikov, a plank was laid across three stools brought from the house, and food and drink was set out on the makeshift tables as the Russian side introduced its own installation to the event. More drink was consumed, a grill was placed on top of the Melnikov model, and pork and chicken kebabs were cooked over the burning house.

"What do you mean, you have never cooked on the Melnikov House before?" one attendee was overheard saying. 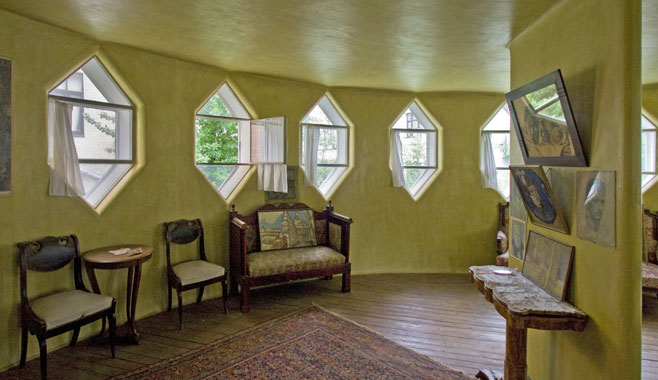 A view of the interior of the Melnikov House, a constructivist landmark known for its iconic hexagonal windows.

The artist was inspired to stage the creative barbecue by a traditional Russian stove on the second floor of the house. When Melnikov's work fell out of favor with the Soviet authorities in the 1930s, the architect made a living by building stoves like the one at the heart of his house.

But Veilhan realized that Karinskaya was not enthusiastic about his concept. "[She] thought that it was a bit strange — 'You are burning down the house!' — but for me it is more the idea of renewing something."

The artist said he wanted to concentrate on the shape of the building.

"[It is] what makes it recognizable," he said. "There is an ideology behind it, a hope that we don't have any more. Such a positive thing and it's so fresh. It's 85 years old, but so fresh."

Everyone invited to the event had some kind of connection to the house and cares about its future, said Natalia Melikova from The Constructivist Project, a website that documents and campaigns for Russia's endangered avant-garde buildings and who helped organize the event.

Student Yegor Yegorychev, 21, who was wearing a T-shirt depicting the house's famous windows, has written a book about the Moscow landmark.

Alexandrovskaya, the historian, went to Russia's far north in the 1980s to find replacement beams for the house during its most recent restoration.

Troshina of the Vkhutemas Gallery organized a Melnikov-House themed exhibit last year where visitors could buy T-shirts like the one Yegorychev was sporting.

A few hours in, with the chicken cooked, Karinskaya had come around.

"I like it," she said. "It is driving all the negative energy out of the house and is a tribute to how my granddad used to make stoves."

Toward the end of the evening, as potatoes were brought out that had been roasted in the coals from inside the mini-house, the architect's granddaughter began reminiscing about when she was a child living in the house in the 1950s and the street was always full of children.

She was well-fed, but the rest were often hungry in the post-war period. Every spring, her grandfather would enlist the local children to help restore order to the garden after the winter, and then roast potatoes for them on a fire.

"I never forget how they would juggle the hot potatoes in their hands and then devour them," Karinskaya said.

Every year, she said, the kids would come up and ask her when her family would cook potatoes again.

The model house was not the only work of art being burned in the garden that night. A pile of red-colored wood lying on the ground by the fire was also tossed into the flames. Actress and director Renata Litvinova had been to the house a few days earlier to film a documentary about the artist Alexander Rodchenko, a contemporary of Melnikov, and had brought with her a copy of one of Rodchenko's works. Nobody knew what it had been, and it was being used for kindling.

Veilhan was philosophical about what people saw and took from the "strange" event that he had created.

"I try to control everything and it escapes. I like the way it escapes," he said. "It is a one-day experience, but it is still an experience."

Biden Says Invading Ukraine Would be 'Disaster' For Russia

The U.S. President said Russia would suffer 'heavy' economic costs and loss of life if they invade.
'STRATEGIC COOPERATION'

The meeting between Russian and Iranian leaders comes as pressure mounts for a decision on the Iran nuclear deal.
ramping tensions

The latest developments you need to know.
urging action

“Instead of ignoring this nonsense, the U.S. accepts Putin’s agenda and scrambles to organize some meetings,” Navalny wrote from jail.