Contribute Today
By Katerina Azarova
May 22, 2014

It has been a glorious week, with sunshine, blue skies and summer-like highs of 30 degrees. And there are so many things to do outside: biking, rollerblading, picnicking in parks and taking boat rides around the city. Of course, this also means that the open-air season is starting, and you can and should expect great live concerts all over Moscow. First in line is the Bosco Fresh Fest, and just by looking at their lineup, you can tell they really want to make an impression. Let's see who is coming into town for the show, and what else is happening in our fair capital.

Friday night is going to the Scots, because Biffy Clyro are in town, and you should definitely go and check them out. The band got together back in 1995, and while it may have taken them a while to find their true voice, and find it they did. After their first three albums, the band expanded their following significantly with the release of their fourth, "Puzzle," in 2007, creating more mainstream songs with simpler rhythms and distancing themselves from their more unusual dissonant style that was present in their previous three albums. At last year's NME Awards, Biffy Clyro received the award "Best British Band," and headlined the main stage at Leeds and Reading festivals.

The band has also performed with musical giants like Red Hot Chilli Peppers, The Rolling Stones, Muse and The Who. They have promised fans a new album soon, so go check them out, they might preview a few new tracks! Plus, it's the first time Biffy Clyro will be making an appearance in Russia, so don't miss them perform! The band is taking to the stage at GlavClub on Friday, May 23 — the gig starts at 8 p.m. and tickets are still available starting at 1,600 rubles.

Saturday is the very first day of the very first open-air festival of the season! Bosco Fresh Fest, which for the last two years took place in Gorky Park, is moving across the road to Muzeon Park, and they are changing their musical focus, too. If the last two festivals were about new Russian music and maybe one big headliner, this year's lineup speaks for itself: lots of internationally acclaimed musicians will be descending on the capital. But don't worry, there are still some great new Russian bands scheduled to play as well. 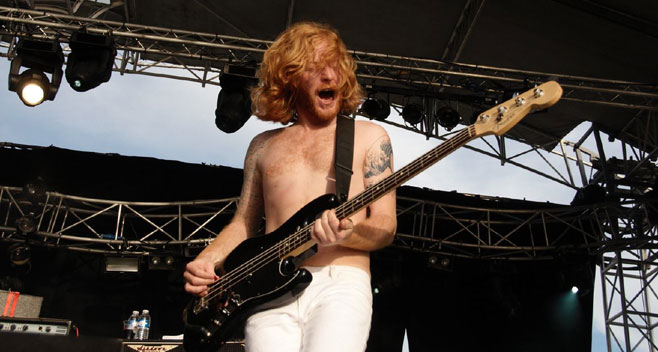 Scotland's Biffy Clyro will bring their reformed act to town this weekend.

But unless you are a huge fan of Tyga and Pusha T, both of whom will be performing at Muzeon on Saturday, I'd suggest going to see Aerosmith instead. It has been seven years since Steven Tyler's troublesome band of merry brothers has played in Moscow, and during that time Aerosmith has managed to  and release a new album. And even if you are not completely sold on the 2012 record, called "Music From Another Dimension," don't forget that the "Bad Boys from Boston" have more than 40 years of experience and in that time have earned themselves the title of one of the greatest U.S. rock 'n' roll bands of all time. Here are some numbers, just to put things into perspective: Aerosmith have sold more than 150 million albums worldwide, including 70 million albums in the U.S. alone. With 25 gold albums, 18 platinum albums, and 12 multi-platinum albums, they hold the record for the most gold albums by a U.S. group, the most total certifications by any U.S. group. And if there is anyone who knows how to rock a crowd, it is these guys. Go see them go crazy at the Olimpiisky Sports Complex on Saturday, May 24.

Sunday's Bosco Fresh Fest lineup is also pretty impressive — New York-based duo MS MR and Canadian slacker-rock musician Mac DeMarco are both making appearances. MS MR released their debut album last year to critical acclaim — their sound is often compared to Florence and the Machine, Lana Del Ray and Kavinsky, so if you're a fan of electro pop with soulful female vocals, don't miss them perform! They'll be on stage at 10 p.m. on Sunday, right after Mac DeMarco — and you can expect him to work a crowd into a frenzy. DeMarco's live shows have been described as "raunchfests," with the musician engaging the audience with off-color jokes. Why, might you ask? Well, the man himself said: "If we are getting all loose and goofy, the crowd usually lightens up and starts having a funkier time." So I say, go do exactly that — lighten up and have a funky time!