The Aeroexpress, the train linking Moscow’s Domodedovo Airport with Paveletsky Station, was only half-full at noon on a recent workday.

But at times passengers may find it difficult to find an empty seat. According to statistics, every fourth passenger chooses Aeroexpress to commute to one of Moscow's three main airports.

"Intermodal transport, which for us means providing a service for passengers going from the city center to one of the airports, has shown some serious growth over the last years," said Alexei Sorokin, managing director of Aeroexpress.

In fact, almost 17 million passengers rode Aeroexpress trains to Moscow airports in 2013, with more than 21 million of them expected on board in 2015. These numbers are expected to double by 2030.

The steady growth in ridership already threatens to overcrowd the existing trains, while underdeveloped rail infrastructure does not allow for a more packed schedule. Aeroexpress has already concluded that it would not be able to maintain its current level of service next year, Sorokin said, if they chose to do nothing.

In 2011 the company decided to hold a tender for the supply of double-decker trains in order to increase existing passenger capacity by 40 percent.

Putting such trains on railway lines is a bold new concept for Russia. Only one route currently operates a double-decker, a long-distance train going from Moscow to Adler, a resort city on the Black Sea coast.

The first stage of the Aeroexpress tender had seven participants — all of them leading international train producers. Only four made it to the second stage. Among them were German Siemens, French Alstom, Czech Republic's Skoda and Swiss Stadler.

"We evaluated the participants under a variety of parameters, including work experience, engineering and production capability, as well as terms of delivery," Sorokin said.

"This contract is a big win for us," said Peter Spuhler, owner and CEO of Stadler Rail Group. "So far we have sold overall 177 double-decker trains to Switzerland, Germany, Luxembourg, Austria and Russia," he added.

The company beat its rivals partly due to its previous experience of building double-decker trains and partly because it was ready to design and supply them within what under the industry standards is a very limited period of time.

"The plan was to supply the first three trains by the end of 2014, which meant we had 18 months to design and build a brand new train," Spuhler said, adding that few of his rivals were ready to work under similar time conditions.

The first 11 double-decker trains are to begin to service the passengers heading to Moscow airports in the summer of 2015. Delivery of the whole order is scheduled by the end of the year.

Last week journalists visiting Stadler's factory in Altenrhein, east of Zurich, were assured that all was going as planned, and that the aluminum shells of the first train cars from the order had already been completed. 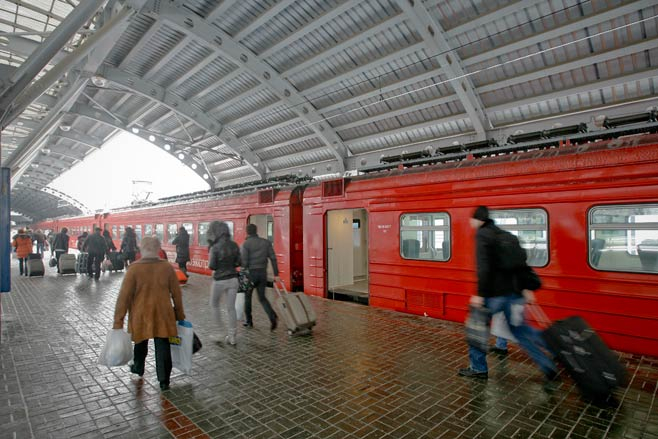 The Stadler Aeroexpress train is based on the company's KISS commuter train, modified for Russia and given the designation KISS Rus. It will be 700 millimeters higher than similar European trains and 600 millimeters wider, suitable for use on Russia's broad 1520-millimeter rail gauge.

The train car body is made of aluminum. Being considerably lighter than the traditional steel frame, it works to cut operational costs. A six-car double-decker train requires 87 tons of aluminum and is composed of 100,000 separate pieces.

Markus Sauerbruch, the head of Stadler Altenrhein factory, said the Aeroexpress trains are specially insulated, designed to service temperatures as low as minus 50 degrees Celsius.

The train is packed with electronic equipment, having its 160 kilometers of cable switched into 80,000 electric connections.

"These will not only have to be mounted but also thoroughly tested with an automatic computer system," Sauerbruch said.

Stadler's factory in Altenrhein will produce only the first three Aeroexpress trains and then will be limited to supplying crucial parts for them. The rest of the order is to be completed at a plant that has recently been set up near the Belarussian capital Minsk.

Unlike its rivals Alstom and Siemens, who set up joint ventures with Russian companies in the wake of clinching local train supply contracts, Stadler took a different route.

In 2012 the company, with the assistance of Belarussian President Alexander Lukashenko, established a joint venture with Belarussian state tram and trolleybus producer Belkommunmash, after fulfilling an order to supply trains for Minsk's public transport system.

In April 2013 construction on a brand-new train production facility began near Minsk under the Aeroexpress contract. Factory head Vladimir Korol said that it was completed in April of this year.

Stadler also decided to open a plant in Belarus to supply CIS countries with broad-gauge products, it said in a statement.

The factory near Minsk will have access to a qualified workforce and enjoy all the benefits of the Customs Union with Russia and Kazakhstan, the company said. The plant will also be in close proximity to Stadler's existing factory in Poland, creating a synergy effect.

"Besides a mutually beneficial contract to build trains for Aeroexpress, partnership with Belkommunmash gives Stadler an opportunity to enter a new market of trolleybuses and promote these Belarus-made products to the European market," said independent transportation expert Alexander Kava.

Together with its Belarussian partners, Stadler is also working on a prototype of a tram that could be sold to other former CIS countries, Spuhler said.

Currently, 100 workers from Belarus are being trained at Stadler's Altenrhein facility and are expected to pass on the knowledge to local personnel in Minsk.

"We will produce something even better in Minsk," said one of the Belarussian workers when asked about his progress on absorbing Swiss know-how in Altenrhein.

Russian Defense Minister Sergei Shoigu has accepted an invitation to meet his British counterpart Ben Wallace to discuss the crisis on the Russia-Ukraine...
russia's response

The latest developments you need to know.