The career of Olympic Russian freestyle skier Maria Komissarova abruptly ended when she became paralyzed from the waist down after suffering a vicious fall at the Sochi Games.

But in the aftermath of the accident, Russia's changing attitude toward people with disabilities has been on full display, and the country's sporting authorities have suggested that Komissarova's athletic career might not be over if she decides to take up Paralympic sports.

Russian freestyle skier Maria Komissarova, who was injured while training at the Sochi Winter Olympics, has recorded a video message to thank people for their support and to say that she is certain of her recovery.

Hailed as a national hero who sacrificed her health for her homeland's sporting prestige at the Sochi Olympics, Komissarova has received wide-ranging financial and moral support — something that would have been unimaginable just a few decades ago in the Soviet Union.

On Feb. 15, the 23-year-old skier freestyle fell coming out of the third jump of a training run at the Rosa Khutor Extreme Park, fracturing her twelfth dorsal vertebrae.

In a sign of the large-scale support Komissarova would receive after the injury, President Vladimir Putin visited her in a Sochi hospital where she underwent an emergency 6 1/2 hour operation before being airlifted to Germany for further treatment. Putin assured that "everything would be done" to ensure her fullest recovery.

Komissarova wrote on her Instagram page in late February that although she could not feel anything below her waist, she was convinced she would stand on her legs again.

Despite being told by doctors in early March that her lower limbs would remain paralyzed permanently, the freestyle skier has remained defiant. She released a video in late March in which she poignantly reiterated that she would walk again. Her boyfriend, featured in the video, thanked the Russian government and Russia's Freestyle Skiing Federation for their financial support.

In addition to financial assistance, Komissarova will also need psychological support to come to terms with the end of her freestyle skiing career after having devoted her life to the sport.

Dr. Pierre Beauchamp, a mental performance consultant for Canadian Olympians, including freestyle skiers, said the paralyzed skier's pledges to walk again were more a sign of Komissarova's strength of character than a refusal to face reality. This determination will help her recover from the psychological trauma of her injury, he said.

"This type of injury is extremely grave," Beauchamp said in a telephone interview. "In these cases, the athlete will go through a grieving process. First, there will be denial, then anger. The last stage of this process is acceptance. Strength of character is essential to accepting the new situation, as is psychological, family and team support."

Komissarova is not the only elite athlete whose Olympic ambitions were cut short by a severe training injury in recent years. Komissarova suffered a fate similar to that of Irina Skvortsova, a bobsledder who fractured her spine, legs and pelvis when her stranded bobsleigh was hit by an incoming bobsleigh traveling at full-speed in 2009.

"Maria and I have been in similar circumstances," Skvortsova said in a telephone interview. "When I visited her in the hospital, we talked about different things, but not about the accident. I was afraid to ask her any questions. But I will gladly answer Maria's questions about life after this kind of injury, if she ever has any."

The medical fees of Skvortsova, who is currently in Germany recovering from a surgery related to her accident, have been fully covered. The Kremlin even honored the injured athlete at the opening of the Sochi Games by inviting her to stand next to Putin.

Much like Skvortsova in 2009, Komissarova has received massive support from fellow athletes, state institutions and her fan base.

Following Komissarova's accident, Russian skiers pasted stickers that said "Masha [Maria], we are with you!" on their helmets and skis but ultimately had to remove them to comply with International Olympic Committee competition regulations. The Canadian ski cross team visited her in the hospital in Germany, a gesture that the Russian Ski Association praised as a demonstration of class and sportsmanship.

"The treatment and rehabilitation of Maria Komissarova is being paid for in its entirety," said Mikhail Verzheba, the press attache of the Russian Ski Association, in a telephone interview. "We are in constant contact with her rehabilitation center to ensure she is receiving the best care. She has nothing to worry about in terms of the material aspect of her recovery. Sponsors also have agreed to make her apartment accessible and provide her with a vehicle adapted to her situation."

Ingosstrakh, the official insurer of Russian Olympic athletes, did not respond to a request for details about athletes' insurance policies in time for publication.

Support for the injured freestyle skier has also come from local charitable organizations that have appealed to the general population. Ostrova, a St. Petersburg-based charity fund, had collected 1,454,630 rubles ($41,443) as of March 25 to support Komissarova after her rehabilitation. 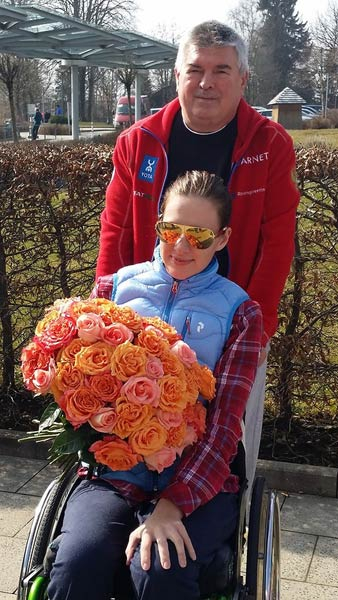 The support Komissarova and Skvortsova have received would not have been possible just a few decades ago in the Soviet Union.

According to Denise Roza, the director of Perspektiva, a Moscow-based NGO that strives to improve the well-being of disabled people, Russia's support for its injured athletes is a relatively new phenomenon.

"In the Soviet Union, rehabilitation was all about fixing," Roza said in a telephone interview. "If they could not fix you, that was it."

Much like Komissarova and Skvortsova, Yelena Mukhina, the 1978 world all-around gymnastics champion, suffered a dramatic, debilitating injury. But she did not receive nearly as much care as today's injured Russian athletes.

Mukhina was paralyzed from the neck down two weeks before the 1980 Moscow Summer Games after landing on her chin while practicing the Thomas salto, a complex floor exercise move that is now banned from women's gymnastics because it is deemed too perilous.

The 20-year-old Mukhina reportedly was not operated on until the third day after her accident because doctors had been away on summer holiday. This delay is thought to have worsened her condition.

But the country's Gymnastics Federation maintains that "everything" was done to help Mukhina.

"The fact that Elena lived 26 years in her condition attests to all the support she had," said Tamara Zheleeva, the chair of the Council of Retired Gymnasts of Russia, in a telephone interview. "We did everything we could at the time. Elena had a one-bedroom apartment, we gave her a two-bedroom. Renovations were ordered to make the environment easier to live in. Everyone supported her."

The Soviet Union awarded Mukhina the Order of Lenin in response to the accident and she also received the Silver Medal of the Olympic Order in 1983 from Juan Antonio Samaranch, the President of the International Olympic Committee. But Mukhina's injury was downplayed by the country's gymnastics coaches and her condition largely remained secret until the collapse of the Soviet Union.

In a 1991 documentary, Mukhina said that her injury was to be "expected" and that she had been convinced she would break her neck while performing the treacherous Thomas salto. Coaches had insisted that Mukhina perform it, despite her resistance.

Mukhina spent the rest of her life in a wheelchair but nonetheless managed to graduate from the Moscow Institute of Physical Education. According to a 2006 interview with former gymnast Lidya Ivanova, Mukhina had been provided with a satellite television dish and a small ramp on her balcony so she could get fresh air. The state provided Mukhina with physiotherapy services, but she largely remained confined to her Moscow apartment, where she lived with her grandmother.

Mukhina died of apparent complications of quadriplegia in 2006.

"People with disabilities in the Soviet Union were invisible, had no status and no rights," Roza said. "The Soviet Union had refused to host the Paralympics along with the Moscow Games because the authorities insisted that there were no disabled people in the country. Now things have changed for the better."

"There is more openness to understanding disability and helping handicapped people. The Sochi Paralympic Games have really shown that Russia takes these issues more seriously."

Three and a half decades after the country refused to host the Paralympic Games, the Russian Ski Association has said it would assist freestyle skier Komissarova if she ever decided to become a Paralympian.

"We will help her with whatever she decides to do, including if she decides to compete in Paralympic sports," Verzheba said. "But for now, I am not sure Maria [Komissarova] even knows what she will want. She needs to focus on her recovery for the time being."

Just a handful of Olympians have become Paralympic athletes after debilitating injuries. Orazio Fagone, an Italian Olympic speed skater who became a Paralympic sledge hockey player after his leg was amputated, and Pal Szekeres, a Hungarian Olympic fencer who competed in his sport at Paralympic Games after being confined to a wheelchair, are the exception.

According to Dr. Beauchamp, the decision to pursue a Paralympic career stems from the full acceptance of the athlete's new situation, which comes after a long and emotionally charged process.

"When seriously injured athletes come to accept their fate, they regain a new perspective on things," Dr. Beauchamp said. "Paralympic athletes have all gone through this. Many of them have excellent stories about how they dealt with their accidents to become fully functioning and contributing members of society."

Former bobsledder Skvortsova, who can now walk with the help of specialized equipment, has decided not to attempt an athletic comeback in Paralympic sport.

"My sporting career is over," she said.

"Now I want to focus on my health as my highest priority."