BRUSSELS — NATO studied new steps to bolster its military presence in Eastern Europe on Tuesday while saying it saw no sign that Russia was withdrawing tens of thousands of troops from the Ukrainian border.

The Western military alliance also said it will suspend “all practical civilian and military cooperation” with Russia because of Moscow’s occupation and annexation of Ukraine’s Crimea region.

Foreign ministers from the 28 NATO members met in Brussels for the first time since Russia’s annexation of Crimea triggered the worst East-West crisis since the Cold War.

They were discussing ways to boost NATO’s military presence in former communist Central and Eastern Europe to reassure allies rattled by Russia’s moves.

The ministers urged Russia in a statement “to take immediate steps ... to return to compliance with international law.”

Calling Russia’s actions unacceptable, NATO chief Anders Fogh Rasmussen said: “Through its actions, Russia has undermined the principles on which our partnership is built, and has breached its own international commitments. So we cannot go on doing business as usual.”

President Vladimir Putin told Germany’s Angela Merkel in a phone call on Monday that he had ordered a partial withdrawal of Russian troops from the eastern Ukrainian border, the German chancellor’s spokesman said.

But Rasmussen said NATO saw no sign of this.

“Unfortunately, I cannot confirm that Russia is withdrawing its troops. This is not what we are seeing,” he told reporters.

As NATO ministers met, Russia warned Ukraine against integration with NATO, saying Kiev’s previous attempts to move closer to the defense alliance had had unwelcome consequences. 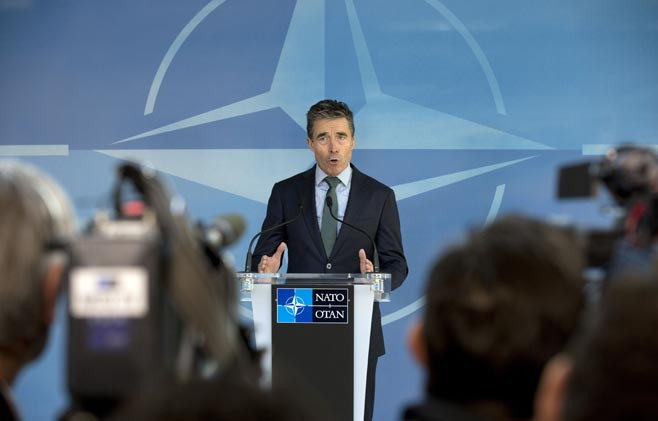 Virginia Mayo / AP
Rasmussen gesturing while speaking to reporters in Brussels on Tuesday.

NATO and Ukraine announced in a joint statement after their ministers met in Brussels that they would intensify cooperation and promote defence reforms in Ukraine through training and other programs.

The U.S. and its allies have made clear that they have no military plans to defend Ukraine, which is not a NATO member, but they have assured allies in Eastern Europe, which joined NATO in the last 15 years after the collapse of the Soviet Union, that they will be protected.

Diplomats said the ministers would consider options ranging from stepped-up military exercises and temporarily sending more forces to eastern member states to the permanent basing of alliance forces in those countries — a step Moscow would view as provocative.

Rasmussen said NATO was “considering all options” to enhance its defenses.

The U.S. and other NATO allies have already responded to the crisis by offering more planes to take part in regular NATO air patrols over the Baltic states. The U.S. has beefed up a previously planned training exercise with the Polish air force.

In another sign of NATO support, Romanian President Traian Basescu said the U.S. has asked to boost the number of troops and aircraft it has stationed at an airbase in his country.

NATO allies differ on how aggressively they should ramp up forces in Eastern Europe in response to Russia’s actions with Eastern European states keen for more NATO support while Western European countries, further away from Russia, are wary of antagonizing Moscow.

Polish Prime Minister Donald Tusk said Tuesday that the pace at which NATO was increasing its military presence in Poland was unsatisfactory.

Polish Foreign Minister Radoslaw Sikorski, who said earlier that he would be satisfied if NATO located two heavy brigades in Poland, said on arrival at the NATO meeting that he would welcome any NATO forces being stationed there.

A NATO military official, speaking on condition of anonymity, said Russia still had some 35,000 to 40,000 troops stationed near the Ukraine border and that there was no sign of any significant reduction.

There was also little evidence that the troops were there for training, the official said. There were some exercises but other units were moving to a location and staying put. “It is an indication of troops given orders to deploy somewhere and awaiting further orders,” he said.