VORONEZH — The son of Cuban revolutionary Fidel Castro declared that the island nation recognizes Crimea as a part of Russia and urged the Kremlin to follow Havana's example and stand firm in the face of international sanctions.

Fidel Castro Diaz-Balart, scientific adviser of the State Council of the Republic of Cuba and vice president of the Academy of Sciences of Cuba, made the remarks while accepting an honorary doctorate from his former university in Voronezh over the weekend.

While Russia is under enormous international pressure for annexing Crimea from Ukraine last month, Castro Diaz-Balart reaffirmed that Cuba officially recognized the referendum results in Crimea that paved the way for President Vladimir Putin to sign the annexation agreement.

He also noted that Cuba joined 10 other countries in refusing to condemn the annexation during a vote of the United Nations General Assembly on Thursday. One hundred countries approved the resolution, while 58 countries abstained.

"During the UN vote, Cuba proved that it remains a friend of Russia and of other countries of the former Soviet Union forever," Castro Diaz-Balart said in the speech Saturday at Voronezh State University.

He insisted that Cuba was also a friend of Ukraine. "The people of Ukraine, as I understand it, do not have any claims against the Russians," he said, following the Kremlin line. "It is those in power who are acting in their own self-interest." 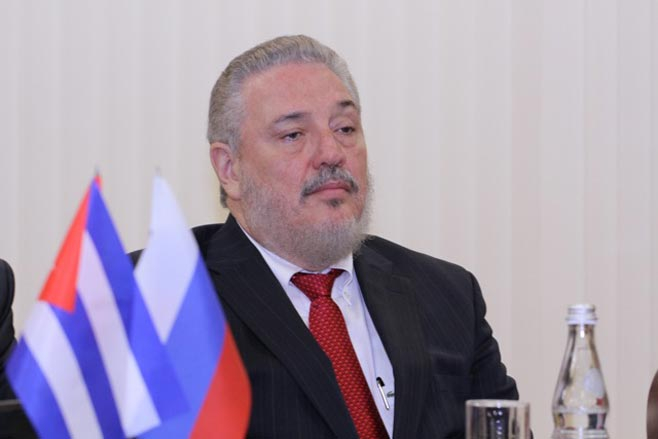 Fidel Castro Díaz-Balart attending a ceremony where he received an honorary doctorate at Voronezh State University on Saturday.

Castro Diaz-Balart scoffed at the steps that the U.S. and European Union have taken to isolate Russia, including the suspension of its membership in the Group of Eight and the placement of travel bans and asset freezes on people close to Putin.

"Cuba has extensive experience of living in isolation from the U.S.," Castro Diaz-Balart said.

The Voronezh visit was something of a homecoming for Castro Diaz-Balart, the eldest son of Castro from his first wife. He enrolled at the university as a physical education student in 1968 and changed his major to nuclear physics two years later, acting under the influence of the university's nuclear physicists. He went on to graduate with honors from Moscow State University.

On Saturday, the Voronezh university gave Diaz-Balart his third honorary doctorate from Russia and an award titled "For Merit to Voronezh State University" at a ceremony attended by Voronezh Governor Alexei Gordeyev.

After referring to Crimea and the uprising in Ukraine, Diaz-Balart finished his speech with a quote from his father: "When all great revolutions come to an end, there will only be one left — the great revolution of science and knowledge. And it will never finish."