While most international media attention is focused on Russia's actions in Crimea and the fate of Ukraine, the fate of one of Russia's only remaining independent television channels hangs in the balance back home.

The channel, Dozhd, has been forced to stage a telethon and ask for donations to survive after being dropped from several major cable providers in a move some say was orchestrated by the Kremlin as part of a wider media crackdown. Now, when independent media coverage is more important than ever amid heightened tensions with the West and speculation of a second Cold War, Dozhd is hoping for a miracle.

See the photogallery: Dozhd TV Behind The Scenes

The channel's editorial staff and owners say they are fighting to survive as much for their viewers' sake as for themselves.

"Many of our viewers have written to us and said that they started watching television again or someone changed their plan to emigrate from Russia because the appearance of Dozhd made them believe Russia's environment had become more free," chief editor Mikhail Zygar said in an interview at the channel's office.

"It may sound pretentious, but we never planned to change something radically, this has just been our own little garden," he said.

Dozhd — founded by supporters of then-President Dmitry Medvedev's team in 2010 to publicize pro-Kremlin liberals — has been known to devote a large amount of its coverage to opposition activities.

The channel's current troubles started when it published a poll in late January questioning whether it was necessary to defend Leningrad from the Nazis at the expense of 750,000 lives of civilians blockaded in the city with scarce food for 872 days.

The channel promptly removed the poll and its representatives apologized, but lawmakers asked prosecutors to check Dozhd for legal violations and some veterans sued Dozhd for offending them.

Prosecutors found no legal violations in the controversial poll but four major сable operators removed Dozhd from their viewing grids, causing the channel to lose 80 percent of its revenue. Some of the networks said the channel was removed "for reasons that do not depend on us."

Aggravating Dozhd's troubles further was the refusal of the channel's current landlord to extend the lease for its office — in violation of the previous agreement — to allow Dozhd to stay until at least 2016.

Now, the channel has until June 20 to find a new office space. But the outlook does not look good, since regardless of how much money the channel gathers through donations, it will not be enough to cover moving to new premises.

Hiring a new space and preparing it for the channel's operation will require funds of more than a few million dollars and 18 months in time, Dozhd owner, businessman Alexander Vinokurov, said by phone.

"If we are evicted from here, it means the end," Vinokurov said about the channel's office at the Krasny Oktyabr art cluster near Kropotkinskaya metro station in downtown Moscow.

Asked about the progress in the talks with the landlord, Vinokurov said, "We are handling them." He refused to elaborate but said all of Dozhd's staff could do was hope for the best.

"We are not measuring our lives by June 20. We believe that we will be able to cope with all the problems," Vinokurov said.

Dozhd's journalists link the troubles of the channel to their independence from the Kremlin and say the attack on them was probably orchestrated by Putin's administration.

"There is no doubt that it was a campaign initiated by people from the president's administration, judging by how it developed," Zygar said.

"When suddenly and simultaneously all television channels … air identical stories, saying that people working at Dozhd television are fascists, surely it proves that this was a coordinated campaign and not the will of state television employees," Zygar said, referring to the outcry from officials over January's poll about the Leningrad Siege.

Dozhd's survival is widely seen as critical to preserve some freedom in Russian media. In recent months, several other news agencies have undergone drastic changes that analysts see as a broader, Kremlin-run campaign to make media coverage of the government more favorable.

In December, Putin dissolved state news agency RIA Novosti and replaced it with a new outlet under the leadership of an aggressively pro-Kremlin television anchor.

In February, a hugely successful news website, Lenta.ru, saw the bulk of its staff resign after the long-time editor was replaced by a pro-Kremlin pundit after warnings over the agency's coverage of Ukrainian nationalists.

Both those moves prompted observers to lament the death of independent journalism in Russia.

In the face of such grim developments for the media and despite all their troubles, Dozhd's editorial board have adopted a policy to try their best to remain unfazed, showing that they really do live by the channel's slogan as an "optimistic channel."

"There was a decision made by the consensus of journalists that Dozhd would continue its work," Zygar said.

"We care for what our viewers tell us and it would be indecent to dump them just like that," he said.

On Monday, Dozhd launched a fundraising campaign urging viewers to buy its online subscription for a year, souvenirs in its online shop or to donate to its bank account.

"The marathon is an experiment on us and on society," Zygar said in a reference to the campaign's aim to find out whether people are ready to pay for an independent television.

"I do not know what it will lead to but in any case it seems to me that this is already a very positive experiment because no media outlet before now has managed to launch a similar fundraising campaign … in support of independent media," Zygar said. 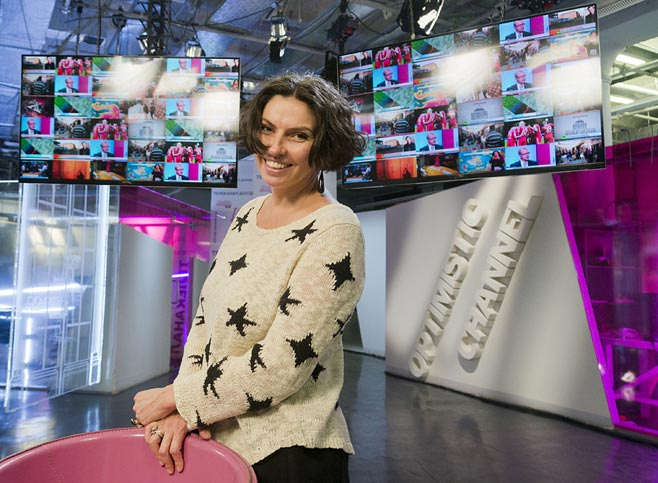 A visit to Dozhd's studio in the middle of a working day showed that the place was buzzing, with people bustling in and out and lively discussions taking place among staff throughout the office.

The office occupies the premises of a former factory production unit — a spacious room divided into irregular sections by transparent glass or white walls and various screens, some of which feature pictures of Dozhd's pink logo.

Blinds made of metal chain rings measuring several meters high divide one part of the office from another. Pink watering pots hang above the front door, tilted, as if they are pouring water, or dozhd which translates as "rain," on the visitors.

The office's unusual layout and decorations create an informal atmosphere, which is also reflected in stylish clothes of the employees, most of whom are young or middle aged.

Anna Mongait, a popular anchor at Dozhd, described her current job as "a really unique opportunity" because of the channel's "free atmosphere," saying she previously tried to work for state-run channels.

"I do not think we are morally prepared for the closure of Dozhd," Mongait said of her and her colleagues.

"If Dozhd stops existing, it would be like being on a mono diet, like eating only chocolate. I suppose it can do some good for your system, but it is not enough for living," she said.

Another popular host at Dozhd, Tikhon Dzyadko, said he had "no time to think" about the possible closure of Dozhd with all work he had to do, adding that he was hopeful the channel would survive.

"We have been prepared for the shutdown from the very first day because we live in Russia, but this has never been a decisive factor," Dzyadko said.

"Every day we receive loads of letters with  support from viewers, and that helps us," he said.

Even if the money collected through the telethon is not enough to rent a new office for Dozhd and prepare it for work, like the channel's owner Vinokurov expects, then Zygar, Mongait and Dzyadko are confident about the possibility of producing video reports remotely.

"I talked to [Dozhd general director Natalia] Sindeyeva as early as a year ago, telling her it would be cool to produce a television channel that is not attached to a studio because news does not need a studio," Zygar said.

Dzyadko said several pocket-sized video uplink systems, like the ones produced by the Aviwest company, would allow reporters to broadcast without a studio.

"Today it is the audience that produces news and you have to be mobile," Mongait said. "I think if Dozhd shuts down, we should contemplate something new, working as the same team," she said.

Sindeyeva was not available for an interview due to her busy schedule, Dozhd spokeswoman Darya Simonenko said by e-mail.

Dozdh's staff, though concerned about the channel's fate, was also clearly proud of the legacy it had created for itself.

Among the achievements of Dozhd, Zygar said, were that its staff proved that it was possible to produce television without the Kremlin's approval, and that journalists with no experience of working on television could do a good job.

Dozhd also persuaded officials that it was possible to talk live rather than in a recording, without knowing the questions they would be asked, Zygar said.

But the Kremlin may have been displeased by some of Dozhd's accomplishments, particularly the fact that it covered pro-Kremlin and opposition politicians on an equal basis, Zygar said.

"I think that someone may not have liked this kind of approach to news coverage very much, especially when it concerned sensitive issues like the situation in Ukraine … or corruption and anti-corruption probes, carried out not only by our reporters but, for instance, by Alexei Navalny's Fund for Fighting Corruption," Zygar said.

Despite the fact that Dozhd is often described as an opposition-leaning channel, Zygar and Dzyadko say it is not one, calling it independent.

"We have been recalling quite often recently a phrase by [late Czech dissident] Vaclav Havel, who said that in a society where deceit reins, any truth becomes opposition," Zygar said.

The large-scale official condemnation of Dozhd for its January poll and the channel's ensuing troubles was only one of many attacks on Dozhd.

In less than a year, the channel was hit by cyber attacks several times. Multiple DDoS attacks were directed at the channel's website in late August and September 2013, ahead of the City Duma elections, when it was trying to interview opposition candidate Alexei Navalny.

The website was hit with DDoS attacks numerous times when it was scheduled to cover the political opposition. The website was down in December 2011 when it covered the State Duma election and large-scale street protests against the voting results.

Then, multiple DDoS attacks occurred when the channel was covering an anti-Putin rally on Bolotnaya Ploshchad in May 2012, on the eve of Putin's inauguration for his third term.

After that, in late December, pro-Kremlin journalists and bloggers accused Dozhd of aiding terrorists by publishing a photo of Chechen rebel leader Doku Umarov.

A Ukrainian family was reportedly told they had “been in Russia too long" by border guards.
collapsing imports