Near the Arctic circle on the shores of Lake Onega lies Petrozavodsk, a northwestern city of 300,000 in the the Republic of Karelia. The capital of the sparsely populated region bordering Finland is small by Russian standards, but is often dubbed the punk capital of Russia and boasts a thriving indie music scene that many larger cities would be proud to have.

Love Cult is one of the stalwart bands in this community. Anya Kuts and Ivan Afanasyev began the group five years ago as an avant-punk band, though categorizing them as part of that particular genre does not help describe their music any better.

"Love Cult has never been about a certain sound, we do not worry too much about these things," they said, speaking to The Moscow Times ahead of their Saturday concert in Moscow, the last stop of their seven-date tour of Russia.

Love Cult's music is equal parts folk music fragments, ambient soundscapes, garage and dub drones, guitar and feedback loops, field recordings and various other samples, deconstructed, then put back together along with a dose of folklore and fantasy from the Karelian forests.

Their music is slow-burning and uneasy, and — like their hometown — beautiful, dark and cold.

"We have never tried too hard to translate [our environment] with our music or to approach the culture or history of the region, however, it is silly to deny that what we do bears the same qualities," they continue.

The duo has toured extensively abroad and is more well-known outside their native Russia. They have been garnering international acclaim in the underground music press since their full-length debut album, "Fingers Crossed," was released on British label Public Information in 2009.

The LP was described by record distributor Boomkat as a "vodka-curdled mixture of haptic textural processing, ghosted chorales and bone-creaking noise streaked with stray samples." 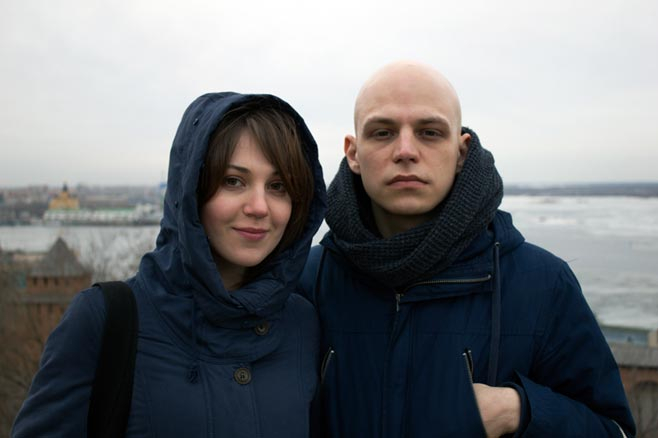 Talking about their recording process, Kuts and Afanasyev explain: "Usually one of us comes up with an idea and creates a palette of sounds, samples, maybe a general bass line or a beat. Then the other takes over and cuts things into little pieces, stitches these together and adds vocals and leads."

The result is akin to listening to fragments of a distant or fading memory — perhaps someone else's.

"We ping-pong the track back and forth, slowing down and speeding up parts until we reach the point where we are not sure anymore what the original sounds we started with were."

Their follow-up "Know" EP was released in late 2013 on Night School Records. Last week, they released the album "Yr Problems" via the Irish label Trensmat under the moniker Love Cult Take Druss, a collaboration between the band and Paddy Shine of Gnod, which the duo describe as their favorite British music collective.

"We strive to get deeper in our own vision, so trying out new things in a different setting is a perfect way to realize what it is so unique that makes our music personal and direct," they say about their many collaborations over the years, both live and recorded.

In live performances they manipulate and process preprogrammed samples, using a web camera to alter the effects in the track.

"It is as if we have a Lego set and we know perfectly well what we are building but it comes out looking a bit different."

Read more about the indie music scene in Petrozavodsk here.