In the tug-of-war between Russia and the West, some states are apparently more equal than others when it comes to correcting "mistakes" of the past.

In his speech to the nation on Tuesday, President Vladimir Putin said that Soviet leader Nikita Khrushchev's decision to hand Crimea to the Ukrainian Socialist Soviet Republic in 1954 was a "clear violation of the constitutional norms that were in place even then." Putin depicted the annexation of Crimea as correcting a "historical error," arguing that the region has played a vital role in Russia's history and culture for centuries. 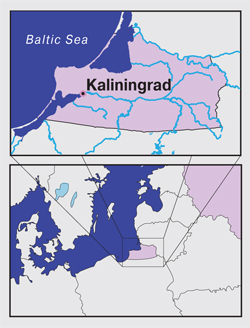 A view of Kaliningrad on a map

But Russia would almost surely look differently at attempts by a foreign power to annex part of its current territory that has clear historical ties to another nation — such as the Russian region of Kaliningrad, a historically German exclave that Germany lost to the Soviet Union in 1945 following the conclusion of World War II.

Germany does not make claims on Kaliningrad, formerly known as Konigsberg, but some consider its status as a Russian territory erroneous, just as many Russians viewed Crimea's status as part of Ukraine. Inesis Feldmanis, head of the Faculty of History and Philosophy at the University of Latvia, said he believed Kaliningrad's annexation by the Soviet Union was, similarly, "an error in history."

So, what is the difference between Crimea and Kaliningrad?

The German region of Konigsberg was decimated during World War II, and in 1941 Stalin ordered the deportation of 800,000 Germans from western Russia to Siberia and Kazakhstan, fearing they would be disloyal in the war against Nazi Germany. Most of the remaining Germans in Konigsberg fled or were deported after the war, while Soviet immigration and Russification quickly transformed the cultural landscape of the 15,100-square-kilometer exclave.

Kaliningrad, which as Konigsberg served as the capital of Prussia in the 1500s and 1600s and was home to German philosopher Immanuel Kant, still exudes Germanic history, despite having served as a closed military area in Soviet times. But today, Germans make up a mere 0.8 percent of the Russian exclave's population of 940,000 — a far cry from Crimea's significant ethnic Russian population and majority of Russian speakers.

That may partly explain why Germany has never attempted to play the "historical error" card to make a claim on Kaliningrad, in the way Russia justified its annexation of Crimea. Worldwide sensitivity to German aggression after the horrors of the Third Reich in World War II likely also plays a role in Berlin's lack of interest in the region.

"I do not think Germany would ever propose such an idea [to make a claim on Kalingrad], or that it would ever become a topic of discussion," said David Ziblatt, a professor of government at Harvard University's Minda de Gunzburg Center for European Studies, in a telephone interview. "Historical evidence [from World War II] has shown that such behavior causes instability."

Despite certain similarities between Crimea and Kaliningrad — both annexed territories with nonfreezing ports and strategic military assets — a key difference in their histories also helps explain why Germany would not make a claim to its former region.

"The West agreed to Kaliningrad becoming a part of the Soviet Union at the Potsdam Conference, when Europe was divided up between allied powers" said Edgars Engizers, a historian and lecturer at the Baltic International Academy in Riga, by telephone. "The post-war circumstances were very different from the ones we are currently seeing in Crimea. Russia's annexation of Crimea will be much more difficult for the West to accept in the future."

It seems that the West's consent to Russia's annexation of the exclave after World War II has made the "historical error" irreversible, at least for now. But with tensions on the rise between Moscow and the West, Kaliningrad's neighbors are becoming increasingly concerned about its role in a newly assertive Russia.

Kaliningrad borders NATO member states Poland and Lithuania, and Russia's annexation of Crimea on Tuesday has raised concerns that Kaliningrad could now be used as a staging ground for further Russian military incursions into Europe.

In early March, more than 3,500 Russian servicemen from infantry regiments and coast guard troops participated in a military exercise on Kaliningrad's borders with Poland and Lithuania, a move that both countries viewed as a direct threat to their security.

Poland and Lithuania requested that NATO respond to Russia's actions by invoking Article 4 the organization's treaty, which calls for holding consultations if a member of the alliance thinks its "territorial integrity, political independence or security" is threatened.

Polish General Marek Dukaczewski also berated Russia for not warning Polish authorities that it would be conducting the exercise.

On Wednesday, U.S. Vice President Joe Biden announced during an official visit to the Lithuanian capital Vilnius that the U.S. would enhance its military and naval cooperation in the Baltic states.

In recent years, Moscow has used Kaliningrad to provoke and warn off the West.

In 2008, Russia threatened to deploy short-range missiles to Kaliningrad if the U.S. fulfilled its plan to build missile defense bases in Poland and the Czech Republic.

Amid speculation that Russia could make a claim to the Russian-speaking areas of the Baltic states, Russian scholars have insisted that Kaliningrad does not constitute a real threat to its neighbors.

"Kaliningrad is seen in the West as a nuclear pistol in the heart of Europe," said Vladimir Abramov, a Russian political scientist who studies the exclave, in a telephone interview. "But in fact there are no nuclear weapons there. Lithuania breeds fear of Russia, and indirectly Kaliningrad, to mobilize its own population. This situation has been the same since the collapse of the Soviet Union. It uses the fear of Russia for domestic policy purposes."

Baltic analysts generally are more wary of Kaliningrad, although they do not believe the militarized region could be the launch point of another Russian occupation.

Engizers, of Riga's Baltic International Academy, thinks that although Kaliningrad could be used to further Russian military development in the West's backyard, the prospect of using the exclave as a platform for territorial expansionism is unlikely.

"We are seeing that Russia does not want to get involved in a full-scale war with Ukraine, which is neither in the EU or NATO," Engizers said. "And this is even more true in its relations with Poland and Lithuania, both EU and NATO members, which border Kaliningrad."

Correction: An earlier version of this article incorrectly stated that Josef Stalin in 1941 ordered the deportation of 800,000 "Konigsberg Germans" to other parts of the Soviet Union, when in fact the Germans who were deported were not from Konigsberg but from parts of western Russia.