Russia consolidated control over Crimea on Wednesday as its troops stormed Ukraine's naval headquarters in Sevastopol and Vitaly Klitschko, leader of Ukraine's Udar party, urged Ukrainian troops to withdraw from the peninsula to avoid bloodshed.

Klitschko's plea came as President Vladimir Putin submitted a treaty ratifying Russia's acquisition of Crimea to the State Duma, which will consider it on Thursday.

The move has created an uproar in the international community, with Western countries denouncing the annexation as illegitimate, imposing sanctions on the Kremlin and promising further measures.

No casualties were reported during the takeover of the Sevastopol headquarters on Wednesday, but fears of a potential military conflict were rife after a Ukrainian serviceman was killed and another was injured during the seizure of a Ukrainian naval facility in Crimea by Russian troops late Tuesday.

Jennifer Psaki, a U.S. State Department spokeswoman, said on Wednesday she blamed the initiation of violence in Simferopol on Russia.

"Putin congratulates Ukraine soldiers for not firing their arms, and then allows one to be shot," she wrote on Twitter. "Stop the shooting in Simferopol. Clear that Russia shot first, and now must show restraint."

Meanwhile, Sergei Gaiduk,  commander of the Ukrainian Navy, was detained Wednesday by Crimean prosecutors after he held negotiations with Alexander Vitko, commander of Russia's Black Sea Fleet. Prosecutors said they had detained him because they had "questions" for him.

As the crisis intensified Wednesday, the United Nations said that its Secretary General Ban Ki-moon was heading to Moscow and Kiev to hold talks on a peaceful resolution of the conflict, while European Union foreign ministers were scheduled to discuss the issue at a summit in Brussels on Thursday and Friday.

The confrontation in Crimea has also sparked tensions between Russia and NATO.

During a visit to Latvia and Lithuania on Wednesday, U.S. Vice President Joe Biden said that the U.S. would respond to any Russian aggression against its NATO allies.

"Russia cannot escape the fact that the world is changing and rejecting outright their behavior," Biden said.

Biden's comments came at the same time that Russia announced the beginning of large-scale aviation drills in northwestern regions near its borders with NATO countries, Interfax reported. The exercises involved jet fighters and bombers.

But Alexei Makarkin, deputy head of the Center for Political Technologies, said that even if such a decision were made, it would be a very lengthy process.

Russia's other neighbors have expressed similar intentions as Russia consolidated its grip on Crimea.

Finnish Prime Minister Jyrki Katainen said late Tuesday that his country was considering terminating its long-standing policy of neutrality and joining NATO. Georgia, which waged a war with Russia over the status of its breakaway republic of South Ossetia in 2008, has also considered becoming a member of the alliance.

Tensions with NATO may have been exacerbated by fears that Russia has ambitions of eventually expanding beyond Crimea.

Such a sentiment was on display Tuesday at a rally held on Red Square after Putin's signing of the agreement to annex Crimea.

Posters hinting at Russia's desire to take back Alaska — with such slogans as "Obama, watch out for Alaska" — were carried by some participants at the rally, and members of the Kremlin-friendly Young Guard verbally expressed the same idea. 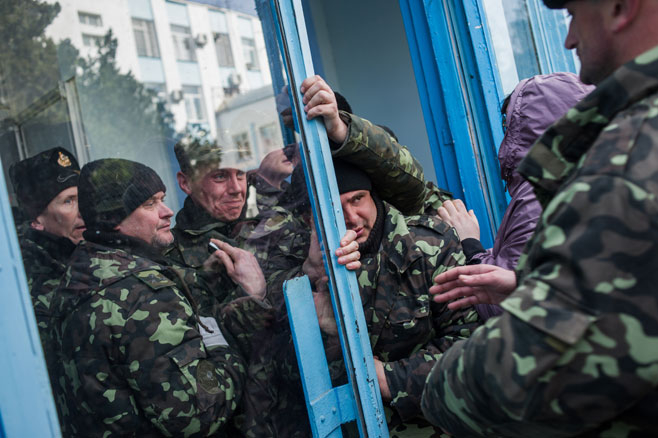 Pro-Russian forces pushing their way into a naval base in Sevastopol.

Complicating matters, the Organization for Security and Cooperation in Europe on Wednesday said talks on deploying monitors to Ukraine had been obstructed by Russia.

"This is the third time that a text has been presented to which only one state objects — and that is the Russian Federation," U.S. Ambassador Daniel Baer told reporters in Vienna, Reuters reported.

"Meanwhile, they continue to say that they understand the urgency of deploying monitors, that they support it, and so they are talking out of both sides of their mouth," he said.

Baer said attempts would be made to find a way to send monitors that do not require Russia's approval, such as EU monitors.

As Russia officially took over Crimea on Wednesday and Ukrainian soldiers were ousted from military bases, more countries joined the chorus of condemnation, denouncing the Kremlin's actions and promising retaliation.

Australian Foreign Minister Julie Bishop said Wednesday that Australia had imposed sanctions on 12 Russian and Ukrainian citizens involved in the annexation of Crimea. These individuals will be prohibited from entering the country and subject to financial sanctions, she said.

Japanese Foreign Minister Fumio Kishida also criticized Russia's actions in Crimea, saying Wednesday that it could introduce further sanctions against the Kremlin. On Tuesday, Japan said it had suspended talks on easing visa rules with Russia.

The statements by Australian and Japanese officials followed White House spokesman Jay Carney's warning on Tuesday that the U.S. was preparing a new round of sanctions. These measures could target some of the powerful tycoons who have close ties to President Vladimir Putin, he said.

Makarkin said that the sanctions imposed by the U.S. and the EU so far, including asset freezes and visa restrictions for some Russian officials, were more of a warning than a real threat.

But future sanctions could still have a significant negative impact on the Russian economy, Makarkin said, adding that Western governments could "informally" advise businesses not to work with Russia and not to lend to Russian firms.

"If a 'cold war' begins, such restrictions are usually introduced," he said.

Western countries have also repeatedly accused Russia of violating the 1994 Budapest Memorandum, under which Russia, the U.S. and Britain guaranteed Ukraine its sovereignty and territorial integrity in exchange for it relinquishing its nuclear arsenal.

But Russia's Foreign Ministry turned the tables on the West on Wednesday, saying that the U.S. and EU had interfered in Ukraine's internal affairs by supporting demonstrators protesting the rule of then-President Viktor Yanukovych in late 2013 and early 2014.

"The U.S. and EU actively encouraged the coup d'etat in Kiev, infringing on Ukraine's political independence and sovereignty in violation of the Budapest Memorandum," the ministry said.

The current Ukrainian authorities have argued that the removal of Yanukovych last month was legitimate, since he was impeached for dereliction of duty and human rights violations.

Due to an editing error, the previous version of this story implied that Sergei Gaiduk was one of multiple commanders of the Ukrainian Navy. In fact, he is the commander.

After retiring from the Russian Air Force at the rank of lieutenant-colonel, Vitaly Votanovsky got involved in political activism in the southern Russian...
'time to prove themselves'

Chechen leader Ramzan Kadyrov said Monday he would send his teenage sons, including his 14-year-old son Adam, to fight in Ukraine. “It's time to...