SIMFEROPOL, Ukraine — While most residents of Crimea seem to have no illusions about the outcome of Sunday's vote to determine the peninsula's future, they cannot agree on whether their daily lives will be affected for better or for worse.

There are two questions on the referendum's ballot, but it seems that everybody in Simferopol thinks the result is predetermined in favor of full accession into Russia. Those who are against this choice say they have no way to make their voices heard.

"What can we do when we were invaded by a foreign country?" asked Oslan Seitkhalimov, 62, a member of Simferopol's Tatar community.

"Why did they come to us? They should have stayed and defended Putin!" he said in front of the Kebir-Jami mosque.

As President Vladimir Putin on Thursday deflected blame for the crisis and said Russia had not "instigated" it, it was impossible to ignore the scale of the pro-Russia promotional campaign in Simferopol.

Dozens of pro-Russia billboards can be seen throughout the city, advertising not just the referendum, but also "the right decision" of joining Russia. One of the billboards was especially blunt: either Crimea joins Russia, or it falls into the hands of Nazis in Kiev. No alternative campaign materials can be found; all tents and leaflets promote becoming a part of Russia.

In world capitals, diplomats from the East and the West have scrambled to find solutions to the crisis, which has been described as the worst since the end of the Cold War. But what is a geopolitical crisis for the rest of the world  is more immediate for all residents of Crimea.

"I want to be a citizen of Russia in order to enjoy economic stability," Vladimir Meshkov, 47, said in front of the Russian consulate.

Meshkov, an ethnic Ukrainian, said he came to Crimea from the central Ukrainian region of Kirovograd, where he permanently resides. He was determined to register himself in Crimea with his relatives so he could get a Russian passport if the territory joins the Russian Federation after Sunday's vote.

"Everyone wants to live where the conditions are better," said Meshkov, a geography and biology teacher, who in the past few years had to work as a construction worker.

Meshkov noted that some of his friends were also planning or considering moving to Crimea in order to obtain Russian citizenship. Many people in Ukraine are "tired of revolutions happening every decade that bring no positive change," he said.

"If Russia invests a lot of money into Crimea, I will stay here. But if not — I will go to Russia," he said, adding, however, that the "Tatars might pose a problem." 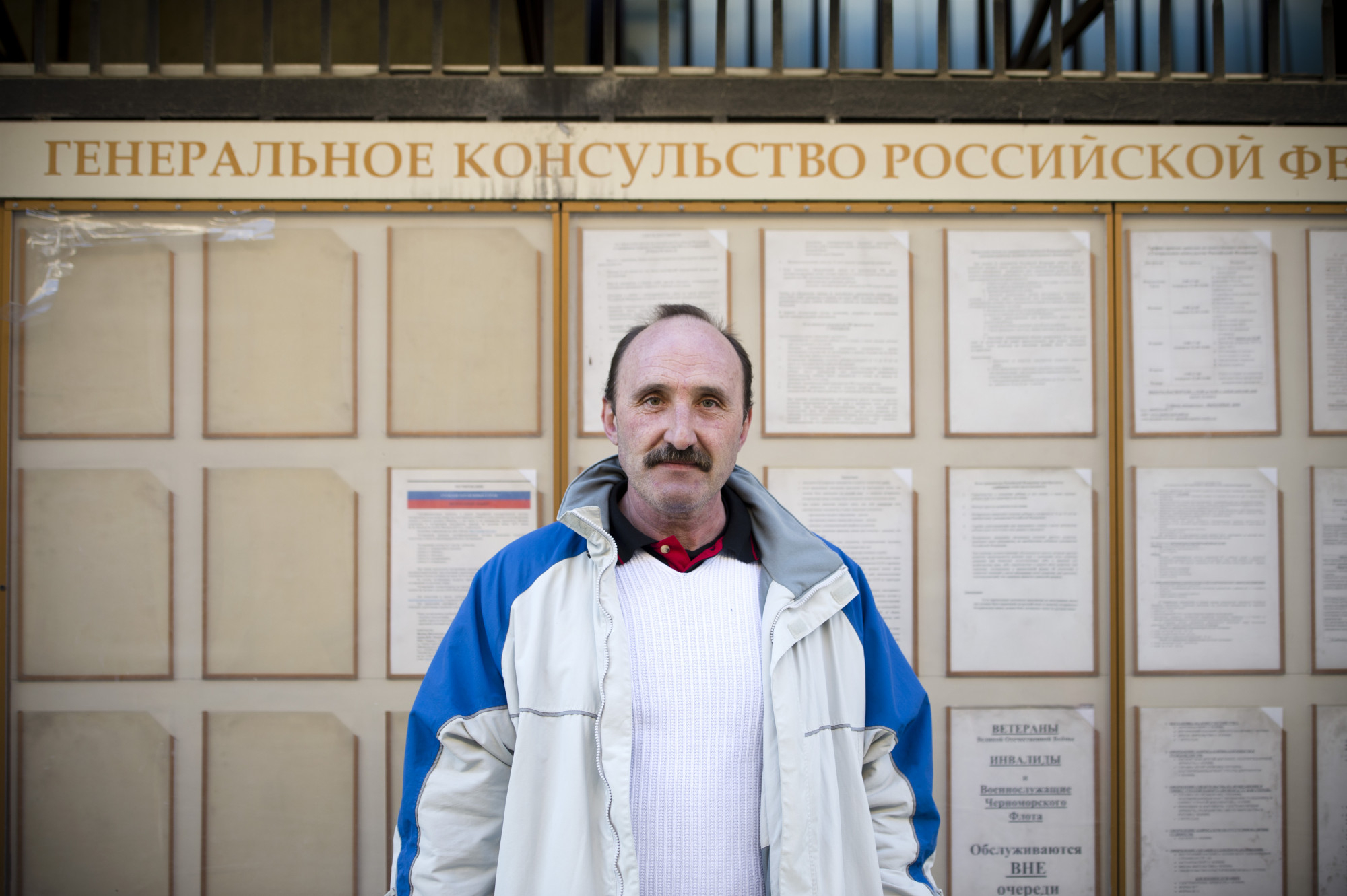 Vladimir Meshkov standing in front of the Russian consulate in Simferopol. ( Pascal Dumont / For MT)

Tatars at Simferopol's oldest Kebir-Jami mosque, built in 1508 — more than two centuries before annexation by Russian Empress Catherine the Great in 1783 — said violence would be their last resort.

"If they come into our houses, then we will respond," said Seitkhalimov, whose family was deported to Uzbekistan in 1944.

"Allah says you should defend your home, your family and your nation. My nation is Ukraine," he said.

At first, Seitkhalimov refused to speak to The Moscow Times, saying that Russian media is misrepresenting what is happening in Crimea.

A flight into Crimea on Thursday from Moscow was packed with Duma Deputies, Russian and international journalists, and it landed in a deserted Simferopol airport that two days ago stopped receiving flights from anywhere but the Russian capital. 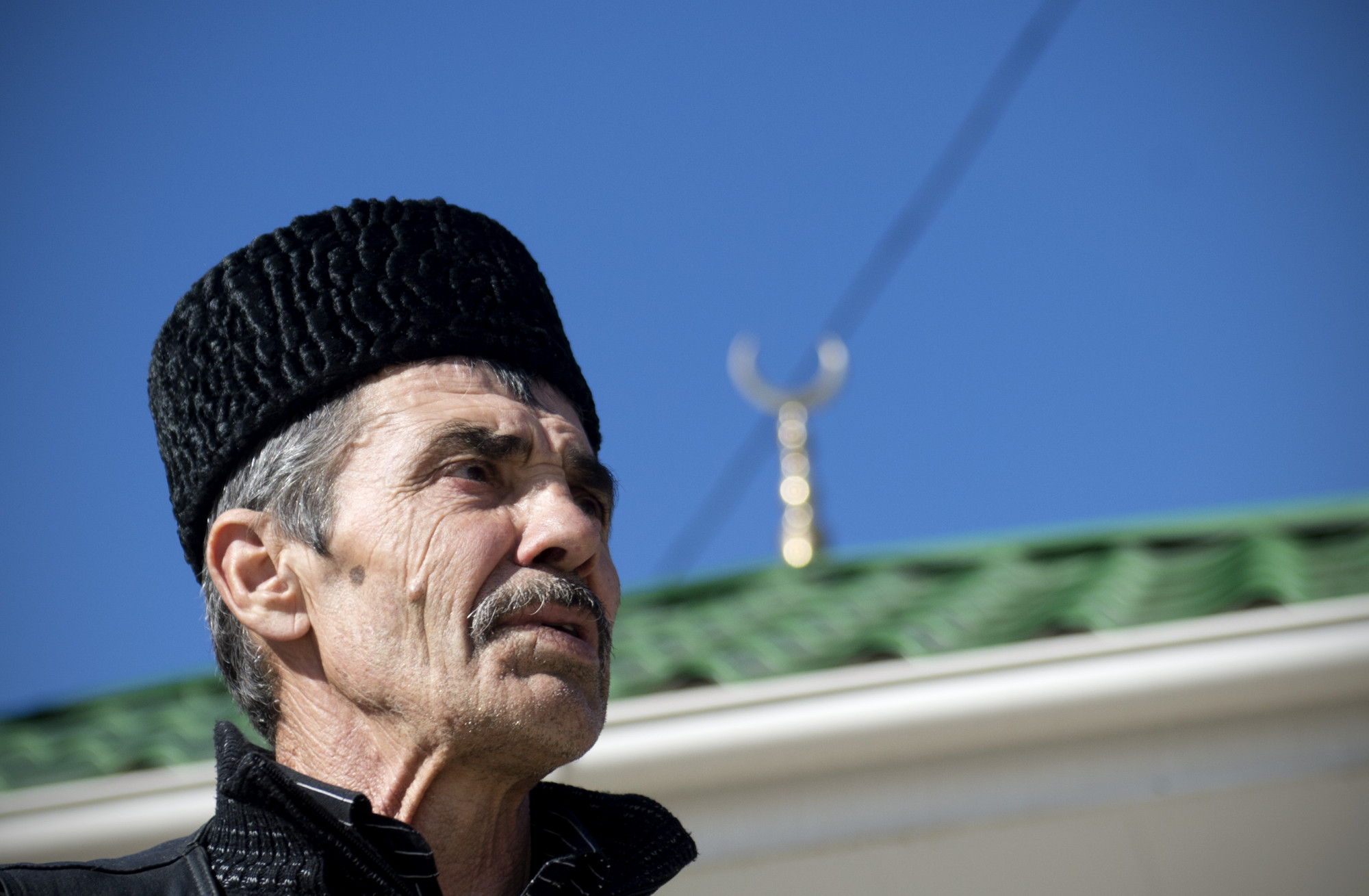 It seemed that the deputies had coordinated their travel with Russian state television channels, which immediately after landing started filming former boxer and current State Duma deputy Nikolai Valuev surrounded by pro-Russia militiamen.

While the situation in Crimea is often represented in clear-cut, unequivocal terms, people living on the peninsula seem to be more perplexed than anything else.

"Many people are in favor of Russia, many are against it, but most do not even understand what is going on," Meshkov said.

The Russian embassy in Berlin on Wednesday denied maintaining links to far-right terror groups in Germany after a Russian woman was among 25 people arrested...