PEREVALNOYE, Ukraine — President Vladimir Putin has dismissed the claim that the heavily armed camouflaged men blocking military units in Crimea are Russian, but nobody in Crimea is buying it.

At a Monday news conference, Putin claimed to be unaware of the identity of troops in Crimea, saying they were definitely not Russian and that anybody "can go to a store and buy any kind of uniform." But it is presumably much more difficult to buy the latest version of AK-47s and GAZ Tigr military vehicles that are at the disposal of the troops blocking Ukraine's military facilities.

On Tuesday, some of these troops were seen digging trenches in front of a Ukrainian military base.

Despite their presence in Crimea being impossible to ignore and the almost unanimous belief that they are in fact Russian, Russian officials continue to deny these claims. On Wednesday, Foreign Minister Sergei Lavrov once again described them as Crimean "self-defense units."

Likewise, Defense Minister Sergei Shoigu dismissed reports of Russian military vehicles with North Caucasian military license plates as a "provocation," but they have been spotted by residents and journalists throughout Crimea. 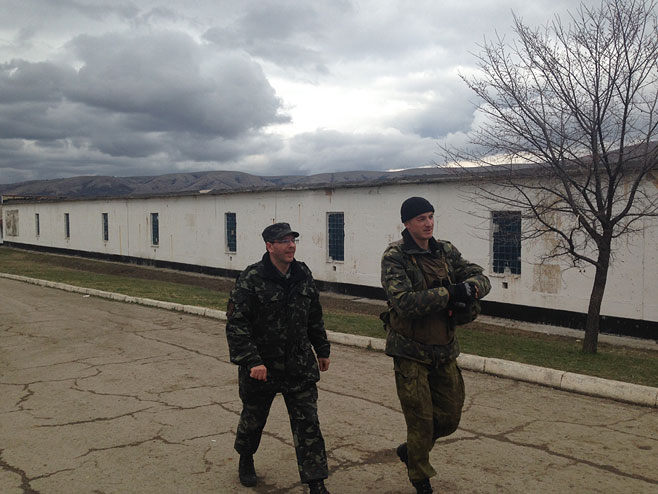 Two Ukrainian soldiers walking near the military base in Perevalnoye that has been surrounded by masked men.

The seemingly Russian soldiers, who local residents of the little military town of Perevalnoye have nicknamed "ninja turtles" because of their commando-style uniform, do not talk. But they do pose for photos, idly, and desperately try to avoid eye contact with swarms of journalists all asking the same questions: "Who are you? Where do you come from?"

"Do you miss home?" I asked a small regiment of soldiers that was moving from one part of the military base to another.

"Of course not!" one of them said.

Even though the soldiers are heavily armed, some locals said they offered insufficient protection of Crimean military bases against supposed armed radicals from the West, if that is in fact what they are meant to be.

About 20 of them stand in front of the entrance to the base in Perevalnoye. They do not let journalists get close to the base or near their makeshift tented canteen.

"I fought in Afghanistan, worked in the Moscow region and now I live in Crimea; for me it does not matter if we are called Ukraine or Russia," said Sergei, a volunteer, standing under a Russian flag erected on top of a tower of used tires.

Perevalnoye, a Ukrainian military base in Crimea, between Simferopol and Alushta, is blocked by Russian troops. Filmed on March 5.

Sergei and many others refused to give their last names, citing fear of reprisal from "whatever the new government will be."

For all those interviewed by The Moscow Times throughout  Crimea in the past three days, the ongoing crisis had not only political undertones, but personal ones as well.

"We have family and friends in Russia and we are closer to them than to the West," said Mikhail, another volunteer at the checkpoint and a local resident of Perevalnoye.

The volunteers and Russian soldiers aim to protect only one of the multiple entries to the base. Their presence does not seem to make much sense, as the perimeter of this military facility has multiple holes and one can still easily enter it. Overall, the base is in ramshackle condition and does not seem to  any military value at all.

In the base's backyard, Ukrainian soldiers — who are said to be blocked inside by Russian troops —  spend their spare time playing hard rock music in the courtyard and exchanging kisses and hugs with their girlfriends from the neighboring Soviet-style apartment buildings.

None of the soldiers agreed to give an interview, but a few of them referred to the other soldiers as "Russians."

Some of these Ukrainian soldiers managed to get out from the back of the base to buy food and beverages in neighboring stores.

But most of the time, they did not have to buy anything themselves, as many Crimeans were bringing it as a sign of support.

"I do not want any foreigners on Ukrainian soil," said Denis, a young man from Simferopol who was visiting the base.

Denis only agreed to speak after he verified that The Moscow Times is not owned by the Russian state and thus is not engaged "in the propaganda campaign."

Denis came to demonstrate his support to Ukrainian soldiers who, in his view, had refused to surrender to Russian forces.

"Putin thought that the whole of Crimea would declare itself Russian immediately, but Ukrainian forces have shown valor and loyalty to the military oath they took," he said.

Nikolai Rudkovsky, former Party of Regions MP, came to the base to talk to people.

The political tug-of-war between Russia and the West over Ukraine has clearly exacerbated the already existent divisions in Crimea and Ukraine at large. While many younger people and national minorities are critical of Russia's hardball military pressure, most of the older ethnic Russians believe they are in danger, and that this danger justifies Russia's presence.

"Everything was calm in Crimea, there was nothing to worry about until the Russians arrived," said Anzor.

"How is it possible for a foreign country to violate our sovereignty?" he wondered, standing on the main square of Alushta, the resort town perched between mountains and the Black Sea.

Many Crimeans retained their sense of irony. One of the jokes trending among Simferopol taxi drivers is the following: "Did you know that Ukraine will send only one athlete to the Paralympics in Sochi?"

"Yulia Tymoshenko in a wheelchair!"