WARSAW — Last Friday, as Ukrainian opposition leaders held out against signing an EU-brokered deal to end bloodshed on the streets, Poland's foreign minister dug into his own history to break the deadlock.

If they did not sign up to compromise with President Viktor Yanukovych, Radoslaw Sikorski told them, "you will all be dead."

That appeal, informed by Sikorski's own survival as a student protest leader and backed by Germany's foreign minister sitting in the room at the Hotel Kiev, seemed to work.

Though the pact the activists approved was a dead letter within a day as Yanukovych fled the capital, it did stop the killing.

It had also shown that Poland, for years dismissed as a poor relation in the EU, has a place at the top table of European decision-makers, enjoying the confidence of EU powerhouse Germany, especially over policy in the east.

The events in Kiev offer clues about the future shape of the European Union, and the shifting balance of power that has seen "old Europe," notably EU co-founder France, lose ground to the faster-growing states that joined the bloc after 2004.

"I have to say there is a lot of admiration for Sikorski right now," said a senior European Commission official.

"It was not perfect the way things turned out, but he was willing to put in the effort and he did. He got it 90 percent right and that is remarkable. There was a need for political leadership and he provided it."

Sikorski's intervention in Kiev was the culmination of years of planning by Poland to give it a louder voice in European affairs, especially on events in its own backyard.

Poland has a special interest in Ukraine. They share a border, their languages are similar, and large parts of western Ukraine were Polish before World War II. Polish foreign policy is driven by a fear of Russia, its former overlord, pushing west into Ukraine and then threatening Poland's own borders.

"There is no secure Poland without a stable Ukraine," said Polish Prime Minister Donald Tusk, architect with Sikorski of a rapprochement with Berlin over the past six years.

Poland's economic muscle has made its voice louder. Since 2008, its gross domestic product has grown by 20 percent. The economy of the eurozone as a whole shrank over the same period. It is now the sixth biggest EU economy, matching its place as the sixth most populous EU state. Its 39 million people make it by far the largest former communist state in the bloc.

A few years ago it was almost unthinkable that Germany would have allowed Poland a prominent role in EU foreign policy. The previous administration, led by the conservative Law and Justice party, fought wars of words with Berlin over World War II reparations and a gas pipeline from Russia to Germany.

That changed in 2007 with Tusk's election. By temperament more moderate, he also struck up a friendly relationship with conservative German Chancellor Angela Merkel, herself a product of communist East Germany.

Sikorski dramatically demonstrated the new trust between Warsaw and Berlin when, in 2011, he called on Germany to play a bigger role in pulling Europe out of financial crisis. Generations of previous Polish leaders had sought the opposite.

At the same time, Polish diplomats were carving out a special role for themselves as Europe's go-to people for anything related to the bloc's eastern neighbors.

The EU's Ambassador in Kiev, Jan Tombinski, is a Pole, and so are many of his staff. 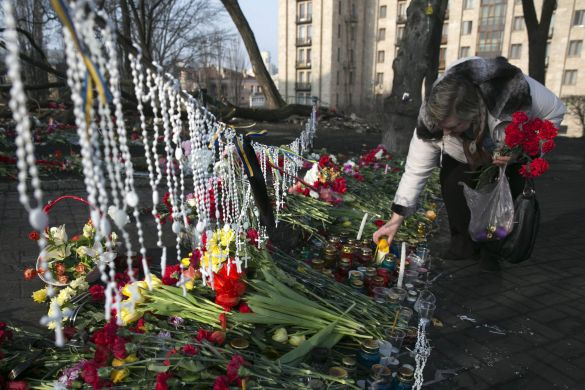 A woman lighting a candle near Independence Square to pay her respects to protesters who were killed there.

The Polish government has been funding civil society projects in ex-Soviet countries such as Ukraine, Belarus, Georgia and Moldova, with much of the aid channelled through a fund controlled by Sikorski's ministry.

Recipients of Polish government money include opposition television stations operating in exile from Belarus, giving Poland influence in a country that, after Ukraine, could be the scene of the next confrontation between Russia and the West.

Such Polish activism arouses suspicion in Moscow, where centuries of rivalry between the two big Slavic powers, Roman Catholic Poland in the west and Orthodox Russia in the east, were marked by repeated wars and invasions in either direction.

Polish diplomats say, however, that they believe they can find common ground with Russia and work to lower tension.

Sikorski's role in the Ukrainian drama was also part of a personal journey — of a kind that has deep resonance in Kiev and which no west European of his generation could match.

In early 1981, Sikorski was an 18-year-old student in his home city of Bydgoszcz, in northwestern Poland. The country was swept by a wave of strikes organized by the underground Solidarity trade union movement. They were in defiance of Poland's communist leaders, and their backers in the Kremlin.

Sikorski led the student strike committee at his university. When martial law was declared, people like him were marked out for retribution. Many were arrested. Sikorski escaped to Britain where he was given refugee status.

He studied at Oxford University, then worked as a journalist, covering wars in Angola and Afghanistan. When communist rule in his homeland finally ended, in 1989, he went back and soon after joined the government.

Sikorski, 51 and married to a U.S. journalist, raised his profile in 2011 with his impassioned plea to Germany to show leadership in pulling the EU out of its financial crisis.

In a dramatic speech in Berlin, he said: "I will probably be the first Polish foreign minister in history to say so, but here it is: I fear German power less than I am beginning to fear German inactivity."

On Ukraine, he has championed a policy of engagement, even when other EU countries wanted to keep Kiev at arm's length.

When Poland and Ukraine co-hosted the Euro 2012 soccer tournament, Polish diplomats fought hard to persuade other EU leaders not to boycott the final match in Kiev in protest at the detention of former prime minister Yulia Tymoshenko.

Poland was again in the vanguard of efforts to get an association agreement signed between Ukraine and the EU. When Yanukovych late last year backed out of signing — triggering the protests that eventually forced him out — Warsaw's policy towards Ukraine began to look ill-conceived.

So Sikorski had much to prove when he flew in on Thursday, a day when dozens died in Kiev, to mediate after months during which Yanukovych's opponents had begun to doubt whether the EU was an institution they could trust.

"Poland has taken on a huge risk in brokering this deal," said a diplomatic source. "Sikorski was strongly determined to reach a deal to stop the violence. There was awareness that what happened had hurt the EU's reputation."

In the meeting room at the Hotel Kiev in Friday afternoon, at the moment when attempts to end the violence were almost sunk by opposition doubts, Sikorski told the activists about 1981. He and other Solidarity leaders had overestimated their own strength, and been defeated, he said. But they eventually prevailed by striking a compromise deal with the authorities.

Whatever role Sikorski's appeal played in ending the killing, Poland's diplomatic credentials have been burnished and could be cemented in a coming round of appointments to senior jobs in Brussels.

Sikorski is eyeing the post of EU foreign policy chief, currently held by Briton Catherine Ashton, or the leadership of NATO, diplomats in Warsaw say. Tusk's allies are also pushing his credentials as a potential successor to European Commission President Jose Manuel Barroso, whose term expires in October.