WASHINGTON — After President Vladimir Putin visited Ukraine last July, U.S. diplomats got a private recap of the message he delivered behind closed doors to the country's leaders. Ukraine, Putin warned, would not be allowed to stray from Moscow's orbit.

Putin's blunt talk was an unexpected sign of how hard Moscow would fight Western influence on Ukraine, U.S. officials say, prompting Washington and European capitals to step up their engagement with Ukrainian government and opposition forces.

Seven months later, the U.S. and Russia are locked in a Cold War-style test of wills over the strategically located country of 45 million that has been racked by anti-government protests and sporadic violence.

U.S.-Russia tensions and mutual accusations of meddling are making it more difficult to find a solution in Ukraine, where the U.S. fears violence may escalate, and is one of the clearest signs yet that U.S. President Barack Obama has made scant progress improving relations with Washington's former adversary.

In Ukraine, former U.S. officials and analysts say, Russia holds most of the cards, including close proximity, energy supplies that Kiev depends on and a promised $15 billion bailout it has used to woo Ukrainian President Viktor Yanukovych away from an European Union trade deal.

Obama, reluctant to act assertively in what Russia has long considered its sphere of influence, has limited direct leverage and few good options.

But Washington has decided to use the Ukraine crisis to take a stand, at least diplomatically, against what the White House regards as a "worrying and troubling" pattern of Russian behavior toward its neighbors, a senior U.S. official said.

"Ukraine is going to be a test" of improved U.S.-Russia relations, said the official, who was not authorized to talk publicly. The administration has a realistic understanding of what is possible with Russia, after early enthusiasm about the possibility of working together. "We understand the shape and the dimensions of the Russia we are dealing with, and it makes it tougher to find that cooperation."

The more activist U.S. policy was unintentionally on display last week in the leaked secret recording of a phone conversation between Assistant Secretary of State Victoria Nuland and U.S. Ambassador to Ukraine Geoffrey Pyatt.

The two are heard speaking intensely about the formation of an interim, reform-minded government and treating Moscow like an adversary. "You can be pretty sure that if [a deal for a new government] does start to gain altitude the Russians will be working behind the scenes to try to torpedo it," Pyatt says.

U.S. officials have not directly blamed the leak on Russia, which has denied its involvement. But the audio clip was first posted on Twitter by Dmitry Loskutov, an aide to Deputy Prime Minister Dmitry Rogozin, a diplomatic source said.

The leak also revealed U.S.-European tensions over how assertive to be in the crisis, with Nuland dismissing what U.S. officials regard as the EU's cautious approach with profanity.

U.S. officials say the damage to trans-Atlantic relations was fleeting, and that polls taken in the days since show a rise in Ukrainians' approval of the U.S.

The 'Reset' Button Is Off

The officials say they are trying to avoid any direct confrontation with Russia over Ukraine, and despite veiled threats from Moscow, they see little chance of Russian military intervention there.

But privately, some describe Putin's determination to keep Ukraine in Moscow's orbit in stark terms, worrying it suggests a desire to redraw European borders and reopen agreements reached after the Soviet Union's 1991 collapse.

Obama's attempt to "reset" relations with Russia in his first term, while it had some successes including a new nuclear arms reduction deal and cooperation on Afghanistan, never produced enduring trust. 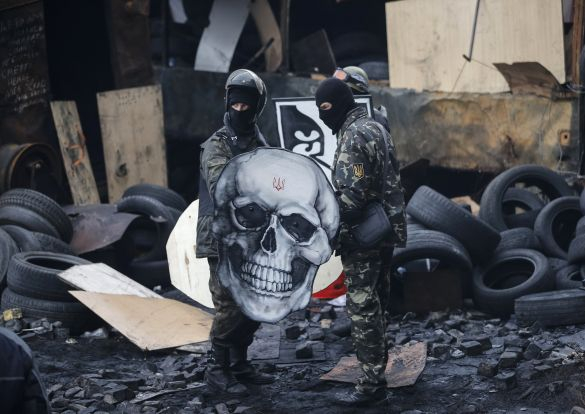 Protesters in Kiev standing near barricades with a skull-shaped shield.

Washington and Moscow are at loggerheads over Syria, where Russia backs President Bashar Assad. The two countries are also at odds over Putin's crackdown on internal dissent and U.S. missile defense plans, which Russia feels threatens its national security. The relationship was further strained when Russia granted asylum to former U.S. National Security Agency contractor Edward Snowden, who leaked classified documents that have caused both security concerns and political problems for Obama.

Obama, in a joint White House news conference with French President Francois Hollande on Tuesday, took a swipe at Moscow for what he said was its blocking of measures to help starving civilians in Syria's three-year-old civil war.

For the Sochi Winter Olympics, which Putin is touting as a major milestone in Russia's post-Soviet revival, senior U.S. officials stayed home. Obama's delegation contained prominent gay American athletes, a diplomatic rebuke to Russian laws such as one that bans so-called gay propaganda.

Thomas Graham, who was senior Russia adviser to President George W. Bush, said the Obama administration is trying to show friends and foes that it is relevant in Eastern Europe at a time when U.S.-Russia relations have deteriorated.

"The administration felt that it had to stand up and show that it had a spine on these issues," Graham said.

But he and others said the U.S. is not in a strong position to influence the outcome of the Ukrainian crisis.

"The strength of motivation is on the Russian side," said Steven Pifer, a former U.S. ambassador to Ukraine now at the Washington-based Brookings Institution think tank.

"It is a hard problem," Pifer said. If the U.S. and EU promised cash-strapped Ukraine $15 billion, "Putin would say fine, here is $25 billion. He is in a position to outbid us on this one."

U.S. officials say they have levers of their own. Brussels and Washington have tried to sway Yanukovych with a trade deal with the EU, the world's largest market, and promises of billions of dollars in International Monetary Fund loans if Ukraine undertakes economic reforms.

Yanukovych is under pressure from street demonstrators, many of whom want Ukraine to have a European, not Russian, orientation.

Although Europeans are unenthusiastic, the U.S. government is also considering expanding sanctions against individuals responsible for violence against the protesters who have occupied Kiev's Maidan Square since late November.

No Country in Six Months?

The protests have spread from Kiev to other parts of the country. U.S. engagement accelerated after the crisis turned deadly on Jan. 22, current and former U.S. officials and a congressional aide said.

Nuland met Yanukovych in Kiev late last week to urge a de-escalation of tensions and constitutional reforms, reflecting U.S. fears that Ukraine could be engulfed in countrywide civil unrest if the crisis is not solved.

The U.S. diplomat is said to have replied to Yanukovych's proposal for a six-month time frame to study constitutional reforms by warning him that, in six months, he might not have a country to govern.

This is an argument that Washington is also making to Russia as it seeks to overcome Putin's view of Ukraine as a zero-sum game in which Kiev's greater economic engagement with the West can only come at Moscow's expense.

U.S. officials fear it will fall on deaf ears, however. Putin sees Ukraine as crucial to his dream of a Eurasian customs union to rival the EU and the U.S.

"Putin lays out an agenda for wanting to sit at the table with the other great powers" but then reverts to "throwback" policies toward former Soviet satellites, the senior U.S. official said. "The Russian leadership wants to have its cake and eat it too."