SOCHI — President Vladimir Putin has relished his role as the host and driving force behind the Sochi Winter Games as media criticism over corruption and flawed facilities was replaced by praise from visitors and athletes.

Despite seemingly ominous reports of construction blunders and foreign leaders being unable or unwilling to attend the Sochi Games, Putin has spent the first four days of the Olympics visibly beaming over what many see as a major win for Russia.

On Tuesday, the International Olympic Committee appeared to confirm the overall success of the Games, canceling a daily meeting held to discuss any issues that need to be tackled.

International Olympic Committee head Thomas Bach said, "We are now four days into the Games and are very satisfied with the way they are unfolding," according to a statement from the committee.

"In light of the great success so far, I have decided to cancel the regular coordination meetings between the IOC and Sochi 2014 until further notice," Bach said.

On Sunday evening, Putin seemed to stave off criticism of the Games' massive price tag by making it clear that the hard work that went into the Games would prove valuable in the long-term.

At a meeting with representatives of the public council for the Games' preparation at the Sochi media center, he reminded the audience of the scale of the project, which cost the government, state-run companies and private investors more than $51 billion.

"Today, the main question is how we will use the infrastructure that was built here in the last six to seven years," he said.

Members of the council praised him for being instrumental in realizing the project and asked for more money to be invested into the area.

But in what some may see as a nod to the Games' critics, Putin said: "The answer is no, because tens of billions of rubles have already been invested into Sochi."

He went on to dismiss the negative media reports and criticism that foreshadowed the Games' opening as a modern-day form of deterrence, a strategy popular during the Cold War and "aimed at hindering the development of the Soviet Union."

At that time, deterrence was ensured militarily, by the very real possibility of mutual destruction if one nation resorted to the use of nuclear weapons. Putin seemed to interpret it differently, however, instead seeing it as dissuasion by criticism.

"Whenever Russia demonstrates any positive development, it becomes clear that the appearance of new strong players and rivals causes concerns in economics, politics and security spheres. We have seen attempts to deter Russia [from success] many times and, unfortunately, this was true with the Olympic project, with the Circassian factor used as a tool," he said. 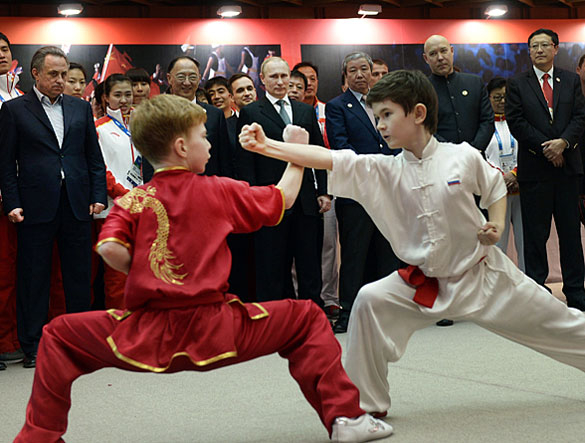 Putin was referring to protests that erupted as the Games opened over the expulsion of Circassians to the Ottoman Empire by the Russian Empire in the 19th century, particularly from the North Caucasus and the Sochi region. The incident, which was recognized as genocide by Georgia in 2011, was cited by rights activists as reason to boycott the Sochi Olympics.

Gay rights was another cause that activists said warranted a boycott of the Games, with critics accusing Russia of creating an atmosphere of cruelty and intolerance with its anti-gay propaganda law.

Days after the Games kicked off, however, rather than being inconvenienced by such protests, Putin was posing for photo-ops  — at one point even with an openly gay athlete.

"Do you have some questions here, some problems?" Putin asked the speedskater in English.

Wust later proudly told reporters that Putin had given her a hug, a fact which seemed to dispel fears that gays would face discrimination at the Games.

He also had beer and toasted to a shot of Austrian Edelbrand brandy at the Tyrol House.

"I would like to congratulate you on your gold medal. I am happy that everything is going so well and will continue to go so well. I wish you all the best," he told the crowd, this time in German.

German media complained that Putin had visited the Austrian house first, but he may have had a good reason for doing so.

The Austrian Doppelmayr group was awarded contracts for the lift systems at Sochi's new ski resort, while the Strabag construction company — which is partially owned by one of Russia's most influential oligarchs, Oleg Deripaska — rebuilt the Sochi airport.

In 2001, Putin went skiing in the famous Sankt Anton am Arlberg resort in Tyrol, along with another oligarch, Vladimir Potanin, and Boris Nemtsov, who has since become one of his harshest critics. He was so impressed with that resort, he said, that he came up with the idea of a similar resort being built in Sochi.

Apart from the Austrian and Dutch houses, Putin also visited the Chinese house on Monday night, where young Russian and Chinese kids showed him their martial arts moves.

He did not, however, take this chance to demonstrate his own judo skills, as some would expect.