With the Winter Olympics having only just begun, bobsledders in Sochi seem to be getting into their fair share of trouble.

Amid the wave of criticism to have hit the Olympic host city since it was flooded by Western journalists and athletes in the run-up to the Games, one of the most frequently heard complaints has been that of missing doorknobs in hotel rooms.

But an incident on Friday proved that even when your hotel room does have a doorknob, this does not necessarily bode well.

U.S. bobsledder Johnny Quinn barged through his bathroom door on Saturday after he found himself unable to unlock it after his shower.

"With no phone to call for help, I used my bobsled push training to break out," Quinn tweeted alongside a picture of the remnants of a bathroom door.

...With no phone to call for help, I used my bobsled push training to break out. #SochiJailBreak pic.twitter.com/apZRefgvCO

In a separate incident, British female bobsledder Rebekah Wilson walked out of her hotel room towards what should have been an elevator, but was in fact just an open shaft.

"Paula Walker nearly didn't have her breakwoman after walking out into this!" Wilson tweeted at her bobsleigh partner.

Canadian bobsledder Justin Kripps has been inconvenienced in a less straightforward way after he was barred from accessing his own website from Sochi.

Several media reports suggested authorities must have restricted Kripps' Internet access because of an image he posted on his website depicting himself alongside his bobsled team last month.

The picture of the bearded athletes in their boxer shorts was seen by some as a nod to the LGBT community after a gay blogger, Andrew Sullivan, named them "beards of the week." 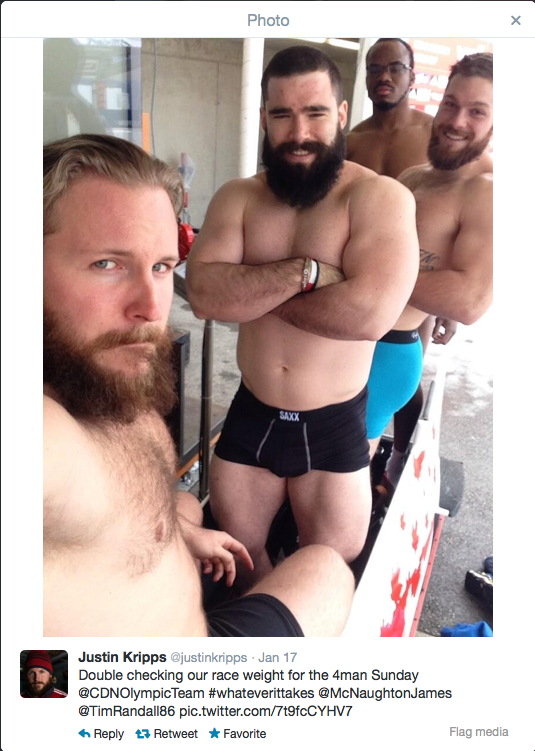 "Looks like my website is censored in Russia, haha classic #SochiProblems. I wonder if there's a camera in my room," Kripps tweeted.

Deputy Prime Minister Dmitry Kozak did little to assuage that suspicion when he attempted to defend Russia from the flood of complaints on Sochi's infrastructure during a press conference on Thursday.

"We have surveillance video from the hotels that shows people turn on the shower, direct the nozzle at the wall and then leave the room for the whole day," Kozak said, seemingly unaware the statement would provoke more questions on how the footage was obtained in the first place.

As far as the Canadian bobsledder is concerned, however, Sochi's facilities are more than up to par.

In a tweet accompanying a picture of the newly built bobsled track, Kripps called it "amazing."

"The toilets are great," he said in a separate tweet.