BELGRADE — When Sasa Matic was offered a job on a building site in Sochi, he suspected it was too good to be true.

Yet he and scores of others from Serbia and Bosnia heeded the siren call of Russia's 2014 Winter Olympics, seduced by the prospect of earning more in two months than most Serbs or Bosnians pocket in a year.

"It was a dodgy deal, but I thought: it is only two months. The money was good, and I needed it," said Matic, an unemployed 41-year-old from the western Serbian town of Sabac.

He was just one of thousands of migrant workers recruited mainly from ex-Soviet Central Asia but also from the Balkans to work on the $50 billion construction of the Sochi Games, a prestige project of huge importance for Russia's image at home and abroad.

For Matic, however, it quickly turned into a nightmare.

The Serbian government repatriated more than 100 Balkan workers last month after they were detained by Russian police for working illegally.

Matic escaped and spent a week train-hopping and hitchhiking before finally walking into Serbia across its northern border with Hungary.

Speaking to Reuters, Matic described how after a 27-hour bus ride to Sochi, he was given lodgings in an empty room and put to work as a plasterer without a contract or the necessary visa. He rigged a light bulb in his room with a scavenged power cable.

Though promised about 4,000 euros ($5,500), he received only two advance payments totaling 600 euros, which he spent mainly on food.

"We finished the job ahead of schedule and demanded our pay," Matic said. "A Russian man came in wielding a gun. He was like the baddie in a gangster movie. We took what little money they gave us and left."

The run-up to the Games, due to kick off on Feb. 7, has been dominated by the threat posed by Islamist insurgents in Russia's turbulent Caucasus region.

But it has also been tainted by complaints of systematic exploitation of construction workers and of lucrative building contracts awarded to tycoons and political cronies, drawing fire from human rights groups.

Metal workers Predrag Lero, Milenko Kuljic and Miomir Stolica — all ethnic Serbs from the impoverished town of Bileca in southeastern Bosnia — were among those detained.

With their hometown ravaged by unemployment, the three were easily persuaded by a Serbian-based employment agency to head for Sochi on a monthly wage of 1,500 euros.

But they were shocked by the conditions they encountered. 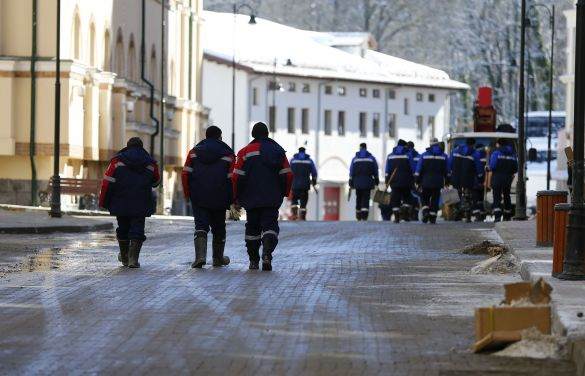 Workers walking through the media village at the Rosa Khutor resort.

Admitted on only a 30-day tourist visa, they were told by their employers to briefly cross the nearby border into neighboring Georgia's breakaway region of Abkhazia and then return in order to renew the permit. The level of security, however, unnerved them.

"The town was almost under siege and we were afraid that we could get caught so we decided: if something like that happens we will give ourselves up," said 31-year-old Kuljic.

Their supervisors promised to organize the border trip, but it never happened and the workers' tourist visas expired. Some, like Matic, fled. Others stayed, dodging the police as best they could until their luck ran out.

Arrested and held in detention for days, Lero, Kuljic and Stolica were flown home with 120 others on a plane chartered by the Serbian government. They earned only 250 euros each.

Asked about the reports of mistreatment, Thomas Bach, the president of the International Olympic Committee, told reporters in Sochi on Monday the issue had been addressed and resolved.

"As a result of this, 227 million rubles have been paid to workers in compensation to address this issue," he said.

Deputy Prime Minister Dmitry Kozak, who has a major role in overseeing the Olympic preparations, said last month he was confident workers would get the money they were promised.

"We will continue monitoring this until all the work is complete and all debts have been settled," he said.

In Belgrade, the interior ministry's anti-trafficking department said authorities have for years been dealing with the problem of migrant workers from Serbia being exploited abroad as they try to escape chronic unemployment and poverty at home.

"We had a case in 2005 in Azerbaijan where about 800 workers from the region were subjected to exploitation," department head Mitar Djuraskovic said.

"There were also cases in Dubai and Belarus," he added.

Two years ago, police used undercover officers posing as relatives to halt a busload of workers heading for Italy and arrested the man who organized the trip.

Last month, police arrested a Serbian man from the southwestern town of Cacak and charged him with trafficking the workers to Sochi.

"The trend is on the rise," said Elena Krsmanovic, a spokeswoman for the Belgrade-based 'Astra' anti-trafficking watchdog.

In general, she said, a growing number of Serbian migrants were being exploited around the world, up from 12 percent in 2011 to 29 percent in 2013.

It is testimony to the plight they face at home — with unemployment rates in Serbia and Bosnia at more than 20 percent — that Stolica said he did not regret trying.

"If we get the chance, we would do the same again," he said. "For us, Russia is the promised land."