With violent clashes between protesters and law enforcement in Ukraine showing few signs of diminishing, pro-Kremlin commentators and lawmakers in Russia have issued dramatic warnings about the possibility of unrest spreading across the border.

Prominent journalist and television personality Vladimir Solovyov said the clashes in Kiev could inspire terrorists who are "intoxicated by the smell of blood and dream of perpetrating a bloodbath in Russia." The State Duma is using the turmoil in Ukraine as grounds to consider harsher terms in a proposed bill on "foreign agents" in the media.

But independent pundits say the seeds of such violent protests have not been laid in Russia, even while some high-profile anti-Kremlin activists have expressed sympathy with Ukraine's Euromaidan movement, if not with its destructive methods.

The pro-Kremlin pundits' warnings are similar to those made in the past about the supposed potential for an anti-government uprising in Russia. Many opponents of President Vladimir Putin call such statements overblown and a tactic intended to build support for repressive legislation.

The warnings seem to be based partly on Ukraine's cultural and historical proximity to Russia and on the fact that the two countries have many links, including between anti-government groups. But pundits also cite the presence in Russia of militant nationalist groups and active terrorist cells aiming to overthrow the current regime.

Members of far-right organizations have been leading figures in the revolt in Kiev, and Russia has had recent experience with nationalist violence. Late last year, nationalists were involved in an anti-migrant riot in a Moscow suburb, and in December 2010 football fans, whose ranks overlap with those of nationalist groups, held a violent protest on Manezh Square next to the Kremlin.

The Russian government seems to have recognized the potential danger to its power that these groups pose, curbing their rise into the mainstream, but some observers say the groups are not unified enough to be a real threat to the Kremlin.

"The evasive nature of Russia's national identity makes the mobilization we are now seeing in Ukraine virtually impossible," said Masha Lipman, head of the Carnegie Moscow Center's society and regions program. "The former Soviet republics celebrate their independence and circumscribe what defines them as a nation. But this is not the case in Russia." 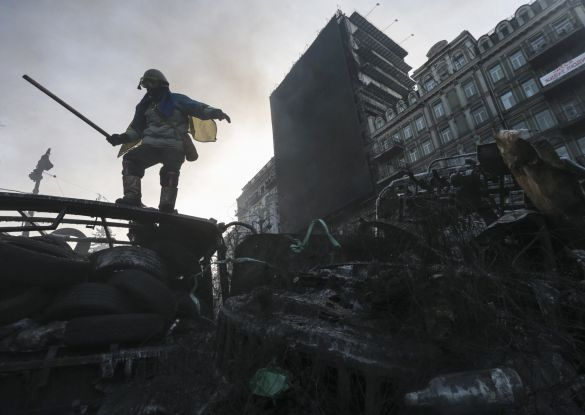 A protester poised on a barricade.

"We often get the sense that Russia 'began' in 1991. When we do not know where we came from, it is difficult to know where we are going," Lipman said.

On Sunday, Navalny retweeted an image from the Euromaidan Twitter account comparing the countries' anti-government movements to a video game. "If you were born in Ukraine or Russia, then you chose the maximum level of difficulty. Only Russians are still on level one, while we are already killing the final boss."

Navalny played a prominent role in street protests against Putin's rule in 2011 and 2012, but last year he took a more conventional approach to winning political power by running in the Moscow mayoral election, in which he placed second. He has also expressed presidential ambitions.

Perhaps less comparable to Ukraine's Euromaidan protests is the anti-Kremlin insurgency in the North Caucasus, although groups involved in that movement have explicitly called for violence to overthrow the state.

Over the weekend, the militant group Vilayat Dagestan, which claimed responsibility for the two suicide attacks in Volgograd that killed 34 people in late December, urged Russians to mobilize against "Kremlin gang leaders." The group said that if Russians did not rebel against the government, they would "not see a quiet life."

Adding to the Kremlin's anxiety over the Ukraine violence is the approach of the Sochi Olympics, during which Putin clearly hoped the world's attention would be squarely on Russia and the Games. Last week, the State Duma called for observance worldwide of ceasefires in armed conflicts during the Olympics, a traditional practice.

Putin has not made extensive comments on the situation in Ukraine since protests intensified earlier this month, but on Friday he met with the permanent members of Russia's Security Council on discuss the standoff in Kiev.

In the Duma, pro-Kremlin deputy Yevgeny Fyodorov accused the media of "practically provoking a civil war" in Ukraine and said the "situation was essentially the same in Russia," Itar-Tass reported. Fyodorov has proposed tightening restrictions on foreign money spent on media outlets.

"The U.S. has spent $5 billion on Ukraine for political reasons," Fyodorov told The Moscow Times. "We want the amendments to the bill to protect Russia from civil war and other horrors that are driven from abroad."

Fellow Duma deputy Ilya Ponomaryov, who was one of the leaders of the anti-Kremlin street protests along with Navalny in 2011 and 2012, dismissed the idea of unrest spreading to Russia, and said the "foreign agent" media bill was unjustified.

"I think a certain group of deputies are trying to please their bosses," Ponomaryov said by telephone. "I really don't see the connection between the unrest in Ukraine and media that receive foreign funding. The idea of 'foreign agent' is absurd in the first place."