Senegal has seized a Russian trawler and threatened to fine it $830,000 for alleged illegal fishing, though Russian fishing officials said the actions could be caused by pressure from Greenpeace.

Senegal's military said on Saturday that the ship, the "Oleg Naydyonov," had been dragging its nets, called trawls, illegally off the coast of the West African nation. The military reported that its forces had boarded the trawler and escorted it to a military base near the country's capital, Dakar.

Senegal can impose a more than $400,000 fine for illegal fishing, but because the "Oleg Naydyonov" is a "repeat offender", the fine may be doubled, Senegalese Fisheries Minister Haidar El-Ali said, AFP reported.

The "Oleg Naydyonov" had already been fined twice for illegal fishing in the Senegalese waters, Ali said.

Russian officials said the Senegalese troops had manhandled the crew — which also included Guinea Bissau nationals — had threatened them with automatic rifles and broke an arm of the ship's cafeteria worker, Dozhd television reported.

Federal Fisheries Agency head Andrei Krayny added that the case was a "provocation" by Greenpeace.

"The Senegalese military was egged on, let's put it this way, by activists from the famous Greenpeace organization," Krayny told Dozhd. He didn't specify whether he thought Greenpeace was also to blame for the ship's supposed prior violations.

Two years ago, the "Oleg Naydyonov" appeared in the Senegalese waters with canvas covering its identifying marks, and supposedly engaged in illegal fishing, Radio Liberty reported. Greenpeace activists sailed to the ship and painted the words "pillage!" and "plunder!" on its hull.

Russia leveled piracy charges against the 30 Greenpeace protesters arrested off Russia's northern coast last year. After an international outcry the charges were reduced to hooliganism, and an amnesty by President Vladimir Putin allowed the activists to go free last month. 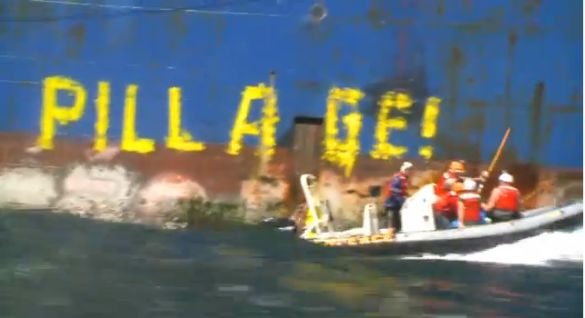 A screenshot from a video showing Greenpeace activists painting the words "pillage" and "plunder" on the ship's hull.  (greenpeaceupdate / YouTube)


Greenpeace Russia head Ivan Blokov said that given the trawler's history of illegal fishing raids, "it is very strange to say that this is happening because of the Greenpeace organization's egging on."

Krayny said Russian diplomats in Dakar would meet with Senegalese President Macky Sall on Tuesday to try and resolve the dispute.