KIEV, Ukraine — Ukraine's opposition appears confident and shows no sign of relenting in its standoff with the government. The government has made some gestures toward the opposition, rejected some of its main demands, and is opaque on another. In the fourth week of the crisis, a look at each side's strengths and weaknesses as the dispute extends into the depths of winter.

The opposition's unquestionable strong suit is the remarkably high morale of crowds at round-the-clock protests in frigid weather — throngs swelling to hundreds of thousands on weekends. Their extemporaneous but intricate organization keeps protesters fed, provides places to sleep in tents or protester-occupied buildings and keeps them entertained with a seemingly endless rotation of high-quality bands.

The unflagging enthusiasm reflects how protests that started with a somewhat stolid policy issue — signing of a trade and political agreement with the European Union — have expanded into an existential quest, a desire to make plain how the Ukrainian people see themselves and want to be. More than one commentator has said the volunteer work at the protest camp, and especially the demonstrators' firm but non-violent resistance to police, show a cohesion that effectively witnesses the "birth of a nation."

The pro-government side appears dully obedient at best. A Sunday rally by government supporters that was touted as potentially bringing 200,000 to Kiev drew less than one-tenth of that number, and some of the demonstrators admitted they had been paid to come. 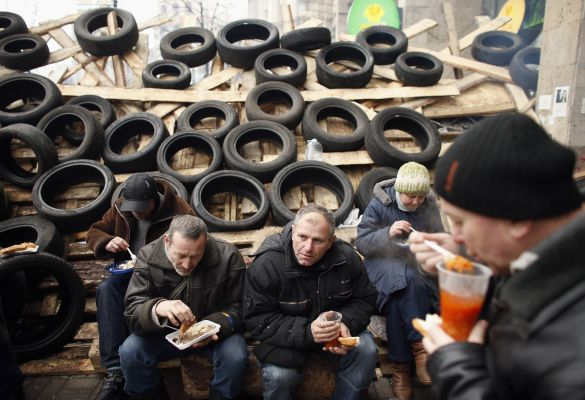 Pro-EU protesters eating free meals near a barricade in Kiev on Monday.

The government has a huge corps of feared riot police — 10,000 of them, the opposition claims. In addition, the military could be called in to break up protests, a prospect that U.S. Defense Secretary Chuck Hagel warned Ukraine against considering. While the government has the overwhelming power, its willingness to use it is in doubt. Two violent police assaults on demonstrators only galvanized the protests. Squadrons of riot police twice confronted demonstrators in Kiev over the past week, then withdrew, leading to speculation that some units were wavering in their loyalty to the government.

The issue that ignited the protests was President Viktor Yanukovych's shelving of an association agreement with the EU and a turn toward closer ties with Russia. Moscow has put heavy pressure on Ukraine to join a Russia-led Customs Union. Yanukovych and President Vladimir Putin are to meet  Tuesday, and speculation is strong that Yanukovych will give in to Russian financial incentives and sign on, a move that opposition leaders warn would only make the protests grow.

Ukraine's tycoons could play a key role with political influence. Rinat Akhmetov, regarded as Ukraine's richest man, on Friday expressed frustration with the uncertainty about Ukraine's EU intentions and boosted the protesters' image by saying "the fact that peaceful people took to the streets for peaceful demonstrations shows Ukraine is a free democratic country."

Although the protests started as a demand to sign the EU agreement, their ambition has expanded to dismissing the government and holding early elections for president and parliament.

That is a nonstarter for Yanukovych, who last week pointedly reminded the opposition that their attempt to push through a no-confidence vote in parliament this month failed.