KIEV — Battalions of Ukrainian riot police withdrew on Wednesday from a protest camp after moving against demonstrators overnight in the authorities' biggest attempt yet to reclaim streets after weeks of protests against President Viktor Yanukovych.

Columns of police abandoned positions around a protest camp and state buildings occupied by demonstrators enraged at Yanukovych's decision to spurn an EU trade deal and move Ukraine further into Russia's orbit.

Within hours, after meetings with U.S. and European Union officials who had urged him to compromise, Yanukovych asked his opponents to meet him to negotiate a way out of the impasse:

"I invite representatives of all political parties, priests, representatives of civil society to national talks," he said in a statement that also called on the opposition not to "go down the road of confrontation and ultimatums."

There was no immediate response from opposition leaders.

Overnight the police had cleared streets near the protest camp, bulldozed tents and skirmished with demonstrators. They later surrounded the City Hall, where protesters who have set up a makeshift hospital in the occupied building sprayed them with water hoses to prevent it from being stormed. 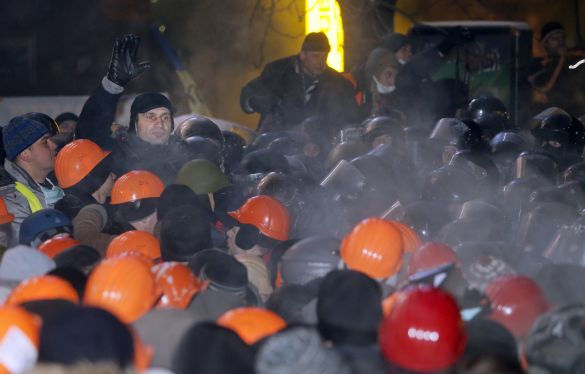 Klitschko signaling in the crowd.

Those moves by hundreds of black-clad police with visors and helmets were the boldest steps the authorities have ordered so far against demonstrators, although the sudden withdrawal suggested they were not prepared to use full force.

At stake is the future of a country of 46 million people, torn between popular hope of joining the European mainstream and the demands of former Soviet master Russia, which controls the flow of cheap natural gas needed to stave off bankruptcy.

At the main protest camp on Independence Square, pop stars, politicians and priests pleaded with police not to shed blood. Opposition politicians called for mass demonstrations to protect the square and predicted that Yanukovych would soon be toppled.

The interior minister called for calm and promised that the square would not be stormed. But even after the police left the streets, Vitali Klitschko, a world boxing champion who has emerged as one of the main figures of the opposition, said the overnight action had "closed off the path to compromise."

"We had planned to have talks with Yanukovych. We understand that Yanukovych has no wish to talk to the people and only understands physical force," he told a news conference.

The police moves energized the protests, drawing thousands of people back out into the streets to defend the camp, many wearing plastic orange hard hats, the color that symbolized a successful popular revolt against a fraudulent election in 2004.

Police had been bussed in to the city center under darkness to shouts of "Get out criminal" — a reference to Yanukovych, who suspended plans to sign a trade pact with the EU last month and instead embraced closer ties with Russia.

Riot police flooded roads to Independence Square, where thousands of people have maintained a vigil in bitter winter cold. Helmeted officers moved slowly into the camp, bulldozing tents and barricades with tractors mounted with shovels. Dozens of demonstrators and police were hurt in scuffles, but several officers said they had orders not to use force. 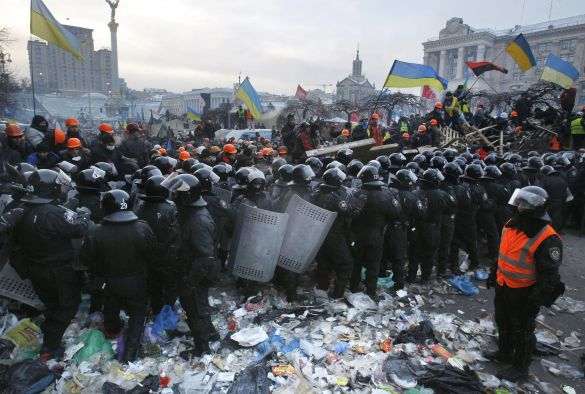 The action stalled after day broke, with temperatures in the snowbound capital stuck at minus 8 degrees Celsius. Some riot police left to cheers from lines of protesters holding them back. At City Hall, demonstrators lobbed a Molotov cocktail from a window into a police truck before the officers finally withdrew.

On the square, protesters said they had feared they would be stormed. Priests intoned prayers from a stage on the square and urged police not to use violence. Ruslana, a Ukrainian pop star, called from a megaphone: "Do not hurt us!"

Some protesters held mobile phones in the air like candles and sang the national anthem, while church bells rang out from a cathedral about 2 kilometers away, as in times of danger centuries ago.

"He is spitting in the faces of the U.S., 28 countries of Europe, 46 million Ukrainians," another opposition leader, Arseniy Yatsenyuk, said of Yanukovych overnight. "We will not forgive him this. Tomorrow there will be a million people here and his regime will fall."

The eventual police withdrawal was greeted with euphoria.

"We are seeing that truth does exist, that it is worth fighting for. It is a small victory, but these small victories will lead to big victories," said protester Serhiy Chorny.