HELSINKI — The Russian businessmen were baffled. No matter how hard they tried to hint clearly that they were ready to grease the palm of the Finnish bureaucrat in order to get the construction permit needed to build a housing project, he did not seem to understand.

And they at first did not understand when they eventually got their permit, on time and having only paid the bureaucrat the official fee.

"This person had everything in his hands to amass a fortune, but he did not take a dime for himself," was the reaction of the Russian businessmen, according to Stepan Obraztsov, the head of SKTS, a company that organizes promotion projects and business trips. "Moreover, the official put on a pair of rubber boots and personally went to inspect the construction site, which was another hair-raiser for the visiting investors," Obraztsov said.

The story is illustrative of the pleasant surprises waiting for Russian businessmen who head across the border to address the Finnish market and get a foothold in Europe.

The Transparency International corruption index released last week confirms the attraction. Finland was ranked third while Russia is in 127th place, up from 133rd a year ago. And the overall business climate rating helps explain the trend. Finland was ranked 12th in the last World Bank Doing Business rating while Russia struggled to go up to 92nd position from 111th where it was in 2012.

The existing ties between the countries are quite tangible. According to the Finnish-Russian Chamber of Commerce, Russia is Finland's biggest trade partner. Finnish companies have made direct investments totaling some 10 to 12 billion euros into Russia. More than 600 Finnish companies are already active in Russia and together employ more than 50,000 local citizens.

But Russian investment into Finland has been a lot more modest, with just more than 850 million euros ($1.1 billion) channeled into the country's economy over the last ten years. Finland is working hard to change that balance.

The effort to make Russians feel at home in Finland is immediately noticeable to passengers disembarking at the Helsinki Airport after the 1-1/2-hour flight from Moscow. They might even have to look twice to be sure they have landed in a foreign country.

Some signs in Helsinki Airport, which itself is not very much different from the modernized Sheremetyevo, are duplicated in Russian.

Hotels label soap bars in Russian as well as in Finnish and English.

Many Finnish officials speak at least passable, if not fluent, Russian.

Support comes from the highest levels. Earlier this year Finland's President Sauli Niinistö said the country should devote more attention to learning the Russian language. There was even talk of making Russian an official language in Finland, together with Finnish and Swedish.

These are all indicators of growing trade and tourism connections between Russia and Finland.

While people in both countries still remember a mutual history not entirely devoid of bloody conflict, this fact does not seem to pose any obstacles for Finnish tourists on their way to St. Petersburg and vice versa, and young Russian high-tech companies setting up their headquarters in Finland.

These trends were highlighted at the Russian-Finnish Rubicon Forum in Helsinki at the end of last month organized by Cursor, which was dedicated to establishing business ties between the two countries.

The amount of Russian investment into Finland has doubled in the last decade, and every sixth new entrepreneur who comes to southeastern Finland is Russian, according to Invest in Finland, a government-run business consultancy.

Apart from big business, the main sectors for medium and small business investment in Finland are recreational services, construction, microelectronics, pharmaceuticals and high-tech.

Technopark Otaniemi, set up more than 20 years ago by the Finnish government outside of Helsinki, is as welcoming to Russian high-tech startups as it is to homegrown entrepreneurs. Otaniemi hosts a number of multinational corporations like Kone, Fortum, Microsoft, Bayer, LG Display, Samsung and more than 100 other foreign companies. The facility includes the "startup sauna"— an incubator office space shaped like a sauna, where anyone can grab a seat and start inventing. Use of the workspace is free of charge. 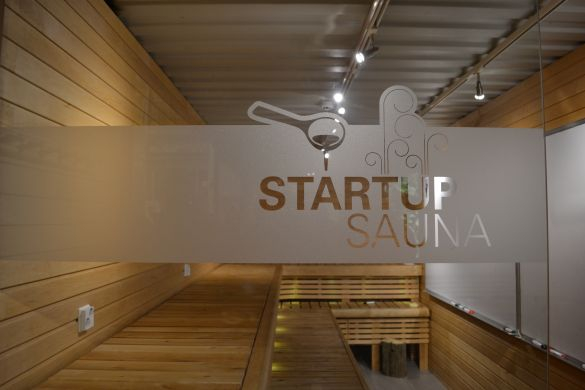 A white board for brainstorming replaces the heater in the startup sauna.

"We have seen two types of Russian investments. They are either made to produce things here in Finland and take them back to Russia — pharmaceutical industry and electro-technical products are one type of example — and then we have other Russian companies which produce things to be exported to Europe," said Tuomo Airaksinen, the head of Invest in Finland.

Products made in Finland are still primarily shipped back to Russia, which has been the case before, he said. But recently more and more Russian companies have come to realize that having production in Finland under European Union standards opens up the whole of Europe for sales and allows them to eye other markets.

The biggest barrier for Russian products entering the EU is marketing. "Even if you have a good product you still have to invest heavily to promote it in Europe, where markets have tough competition," Airaksinen said.

Oleg Paliy, a former Nokia employee and now a partner with Kaato, a state-founded company that helps foreign IT companies establish their business and promote their products to European markets, said experts in Finland can offer Russian companies marketing services.

"Russians are good at inventing something, but the key is to bring these startups to the market, which is a different task and not many of them understand how to handle it," Paliy said.

Finland offers not only marketing expertise but also significant benefits for startups. Companies involved in R&D can get up to 50 percent of their property rental costs reimbursed by the government. And some state programs offer a refund of up to 70 percent on the money spent to launch a product and have it promoted globally.

Russian executives said they appreciated the ease of starting a business in Finland.

"All ecological regulations were explained to us before we started building; the paperwork was prepared very quickly and it took a year in total to set up a functional, which is fast," said Alexander Khromov, the head of pharmaceutical company Cytomed, at the forum.

However, there are some challenges to being a foreign investor in Finland, the executives said.

"The existing regulations make it obligatory to translate all business documents into Finnish, although our main working language is English. And if you have several thousand pages of documentation this can be painful," Khromov said.

Another obstacle is a lack of trust by Finland's banks of Russian capital and Russian companies, the Khromov said.

"Because of the excessive checking we were subjected to when trying to receive a loan in a Finnish bank, we had to get it elsewhere."

The claim that it is difficult for Russian businesses to receive a loan in Finland's banks was later backed by other executives at the forum, although Invest in Finland executives said the requirements were the same for all investors, foreign and domestic.

The benefits of doing business in Finland outweigh the difficulties, most Russian executives at the forum said.

Finland has a very high level of education and it is easy to find a good engineer, a category which has become almost extinct in Russia, said Vladimir Dosov, the head of Varma Electronics.

"Their salary expectations are very high, however, which is not the case in Russia … And there are many difficulties when trying to bring in Russian expats who agree to come and work in Finland," Dosov said.

Many Russian companies see the country as a starting point for a foray into Europe.

"A label 'Made in Finland' means a product was made in the EU and this brings competitive advantage," said Vladimir Robush, a board member at shipbuilding company Navis Engineering. "Unfortunately, the conservative markets we are working in lack trust in Russian producers. They say that we can invent something but can never get it to production stage," he said.

In order to get their products to new markets and to maximize profit, Russian companies are ready to go the extra mile — something their Finnish counterparts are not always willing to do, according to business consultants working on bilateral projects.

"While Finnish companies just want to leave things as they are, Russians are willing to work extra hours and keep trying even when some doors before them have been closed," said Sergei Troshkov, project manager at Cursor, a regional consulting company that helps Russian businesses establish operations in Finland.

Many of the doors are open, however, especially for companies working in the IT industry.

"The Finnish government is interested in supporting foreign companies that would bring new jobs and taxes," said Tom Hultin, the head of Hultin Partners consultancy.

After Nokia cut more than 1,000 jobs last year in Finland alone under its restructuring program, the country is in need of new employment opportunities in telecommunications and related areas, business consultants said, and it is hoped that Russian companies will help satisfy this demand.