A reporter from The Moscow Times asks a police officer in Sochi, the Black Sea city that will host the Winter Olympics in February, if he has learned any basic English phrases to help visitors who don't speak Russian.

SOCHI — Everybody speaks English in Sochi these days. Or, rather, they speak enough of the language to claim that they speak it, quickly admitting, however, that they know "very little."

This polite if unhelpful reply is typical when you try to talk to taxi and bus drivers, flower vendors, cashiers, ordinary citizens and the numerous guest workers who came to build what is meant to be one of the most impressive Olympic Games in history.

As part of the strategy to make the environment tourist-friendly, Sochi has embarked on a race to make English the city's second language.

Today, even if you will not get much help in English around the city, you can notice significant differences between now and just a few years ago and between Sochi and the vast majority of cities in Russia. In Sochi, even if people are not able to say much, they still smile at you, glancing shyly, and then try to help by gesticulating and pointing out directions.

This was the kind of assistance given by Rustam Islamov, a road police captain who was transferred to Sochi from his native republic of Mari El to help make the Olympics welcoming and secure. When approached by a reporter speaking English, he said he spoke English "poorly" and could not say much else.

"We were instructed that in case you cannot say much to a foreigner, then you have to smile and be nice," Islamov said later in Russian, standing on Sochi's main thoroughfare, Kurortny Prospekt.

Many police officers received additional training before coming to Sochi, according to Islamov. He was sent to Yekaterinburg to take classes, including in English, but the result, apparently, was less than stellar.

"Our main goal is not to make people converse in English fluently, but to motivate them to learn," said Olga Medvedeva, head of the education department in the Sochi city administration.

When news reached Sochi in July 2007 that the Russian resort town had been awarded the Games, Medvedeva's department unleashed a massive campaign aimed at making people learn basic English. 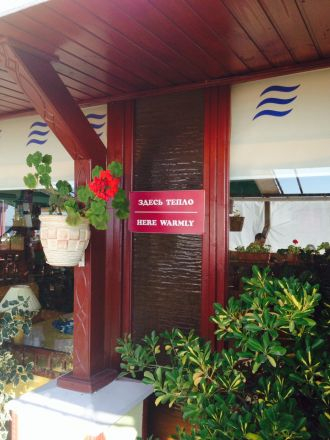 A sign that in Russian reads “It is warm here” mistranslated into English.

LCD screens were installed in public buildings across the city that show rotating English words and phrases. After years of operation, most people do not seem to notice the screens, which look as natural in the Sochi landscape today as bus stops or garage guesthouses.

The list of words on display is diverse. In recent days, the "Word of the Day," as the scheme was dubbed by local authorities, concentrated on the wide array of various dishes that foreigners might want to be served in Sochi restaurants. For instance, on Monday the word was "rice."

"Would you like some rice or vegetables with this?" asks a voice on the screen, with the answer popping up in a few seconds: "Some rice please."

Sochi residents are expected to encounter the words at least five times each day.

The goal of the program is not to make residents conversant in English, but to get them interested enough to take English classes. City Hall offers free 20-hour courses taught by volunteers.

"We have already had at least 4,000 people take the course," Medvedeva said in a phone interview.

Andrei Ponomarenko, head of the G8 Language School and an interpreter for the Sochi 2014 Organizing Committee, said he benefited greatly from the recent boom of English-language learning in Sochi.

After graduating from a local linguistics university with a degree in English Training in 2004, Ponomarenko found that there were not many students in Sochi interested in his services. Thanks to the Olympics, his business has taken off.

"Before Sochi was awarded the Olympics, it was a complete swamp here. People did not get why they would need to speak English," Ponomarenko said.

"Today we observe a huge improvement. People have seen how many foreigners come here, so they simply all ran into our school," he said.

His school currently employs 10 teachers, with major corporate clients sending their workers to learn English there. 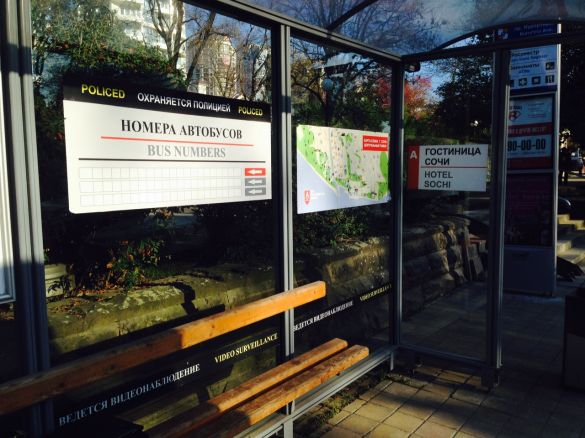 Signs at a Sochi bus stop that feature English-language translations.

A more concerted effort has been made to teach English to the Russian volunteers and workers who will help put on the Games. More than 30,000 Sochi volunteers and Organizing Committee staff have had to take lessons, through a course provided by the company English First dubbed "Winter Games English."

Some Sochi institutions have also made special efforts to ready themselves for the games.

"We had to prepare people enough to make the visitors see that we are glad to see them," said Lyudmila Zyudchenko, director of the Nikolai Ostrovsky museum, dedicated to one of the foremost Soviet social realist writers.

For the Olympic period, the museum will hire a professional interpreter who will help visitors understand the guided tours. The effort has not, however, extended to the museum's web presence, with its website remaining in Russian only.

Sochi taxi drivers have also been forced to join the English-language bandwagon, with each of them having to get special accreditation allowing them to work during the Olympic period.

While driving a Moscow Times reporter to the train station, Vagit Usmanov could not say much in English. Later speaking in Russian, he said he was unfazed by the accreditation requirement.

"There is no problem with it — we know how to get it," he said with a tone of indifference, without elaborating.

In October, Sochi City Hall conducted a massive check of taxi drivers that revealed that many of them could not respond to basic questions such as "How much is the fare?" "Can I open the window?" or "Can you turn off the music please?"

Along the Sochi coast and up in the Caucasus Mountains, it quickly became visible that everything has been made bilingual. Every store and signpost has English translations.

The rush to add them has led to some entertaining results. Sochi residents giggle about how Ulitsa Golubiye Dali, which ran be roughly translated as "Clear Expanses Street," is instead Blue Dali Street, and Ulitsa Roz, or "Roses Street," has been dubbed Roze Street.

Zyudchenko said the main aim of Sochi authorities was to make the city polite, not bilingual.

"Perhaps we are not the friendliest nation, but when we have guests we are the most welcoming," she said.