Nine foreign Greenpeace activists were granted bail by a St. Petersburg court, two months after being arrested for staging a protest near an oil rig in Arctic waters.

The release of activists from the Arctic Sunrise comes amid increasing international pressure to exonerate the “Arctic 30” and sustained efforts by the Russian government to showcase the country in a positive light before it hosts the 2014 Sochi Olympic Games in February.

The court said they would be released as long as bail is paid within four days, The Associated Press reported.

But a bail request by Colin Russell, an Australian national, was rejected, and he will be held in custody until Feb. 24, the last day of the Sochi Games, Greenpeace reported.

As of Tuesday evening, 18 of the 30 remained in detention. No trial dates have been set.

“The Arctic 30 will not be free until every last one of them is back home with their families," said Kumi Naidoo, Greenpeace International's executive director, in a statement on the organization's website.

Maciel, the Brazilian activist, was the first foreigner to be granted bail of the 30 activists from 18 countries. They were arrested Sept. 19 after staging a high-seas protest against oil drilling in the Arctic that saw two of the activists try to scale the Prirazlomnaya platform, Russia’s first offshore oil platform in the Barents Sea.

Maciel's release — occurring one day before Brazilian Foreign Minister Luiz Alberto Figueiredo is set to meet with Russia's Foreign Minister Sergei Lavrov — could suggest that the Kremlin has been feeling the heat of international pressure. 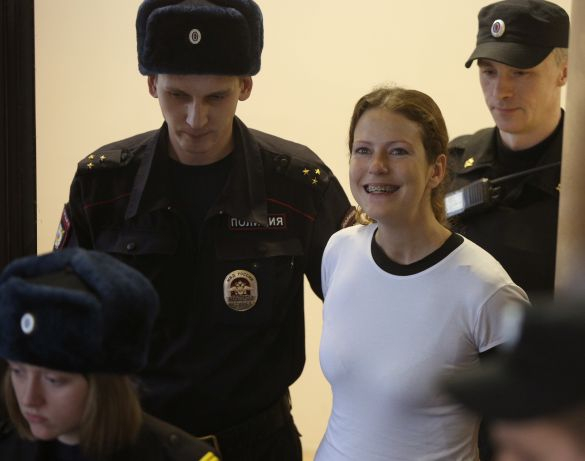 "The subject [of Maciel's detention] has already been forwarded between the ambassadors of the two countries, but this will now be the first high-level meeting between the two sides in which the Brazilian foreign minister will express the concerns of President Dilma Rousseff," a Brazilian Foreign Ministry spokeswoman said shortly before the court ruling.

The ministry's spokeswoman cautioned against connecting the activist's release to the minister's visit to Russia, as Russia is a close partner of Brazil in the Group of 20 and BRICS.

"It is just a coincidence," she said.

Mikhail Kreindlin, a lawyer for Greenpeace Russia, endorsed the Brazilian statement about the nature of Figueiredo's visit.

“I do not think the Brazilian foreign minister's visit is the main reason for the activists' release,” Kreindlin said in a telephone interview. “I think their release is the result of many different factors, including international pressure campaigns.”

Following the arrest of the “Arctic 30” aboard the Arctic Sunrise, a vigorous international campaign was launched to push for their release.

But while Russia feels the pressure to be on its best behavior with less than three months before the opening ceremony of the Sochi Games, Putin does not like to be viewed as the “victim” of international pressure, said Stanislav Belkovsky, founder and director of the Moscow-based National Strategy Institute.

“International pressure is the scariest concept for Putin,” Belkovsky said in a telephone interview. “Putin wants to show everyone that he himself released the activists out of his greatness and goodwill, and that he is not moved by external pressure.”

The Sochi Games also certainly weighed in the court's decision to release some activists, Belkovsky said, adding that “without Sochi, there would have been no release.”

The Arctic 30 were arrested the day following their protest near the Prirazlomnaya oil platform, a Gazprom-owned oil rig.

The ship then was towed to the port of Murmansk and all 30 activists were initially charged with piracy, which can entail up to 15 years in prison. The piracy charges were subsequently dropped and replaced with hooliganism, which can carry a prison sentence of up to seven years under Russian law.

A Moscow court on Wednesday rejected an appeal by the jailed Russian journalist Ivan Safronov against his 22-year jail sentence for treason earlier this...