Despite what appeared to be an easy victory in Tajikistan's presidential election, Emomali Rakhmon faces the challenge of placating divergent interests of major players in the region after NATO forces withdraw from Afghanistan next year.

More than 90 percent of eligible voters cast their votes Wednesday at thousands of polling stations in Tajikistan and across the world, 24 of which were opened in Russia.

Emomalii Rakhmon, 61, was set to win the election and thus extend his 19-year-long rule over the Central Asian country for another seven years.

Rakhmon's government has been slammed by international rights groups for cracking down on dissent and keeping tight control over the media, and many of his critics accuse him of creating a personality cult.

The only opposition candidate in the election, rights activist Oinihol Bobonazarova, was denied registration on the grounds that she had failed to collect the signatures of 5 percent of voters. Although she insisted that she had in fact done so, the Central Election Commission said she fell short.

While Commonwealth of Independent States observers have praised the overall electoral process and claimed they did not see any signs of fraud, a government official presented The Moscow Times with a contrasting picture.

"My son was able to come and vote multiple times," she said, on condition of complete anonymity due to fear of reprisal.

"Rakhmon did a lot of good things, he works hard and so we all vote for him almost automatically," she said. "But the truth is that we are frightened all the time."

The government official was afraid to lose her job, something that is very hard to find in today's Tajikistan.

More than 10 precent of its population of 8 million people work in Russia, with their remittances accounting for about half of their country's GDP.

Along with other Central Asians, Tajik workers have increasingly become a target for Russian nationalists, who claim their numbers in Russian cities have become excessive.

President Vladimir Putin recently softened the migration procedure for Tajik workers, however, allowing them to stay and work in Russia without registering for 15 days after arrival.

"On the one hand, by getting more migrants Russia will have more leverage over Tajikistan, but on the other, it will be increasingly difficult to explain this situation to the Russian public," said Alexei Vlasov, director of the Post-Soviet Countries' Research Center. 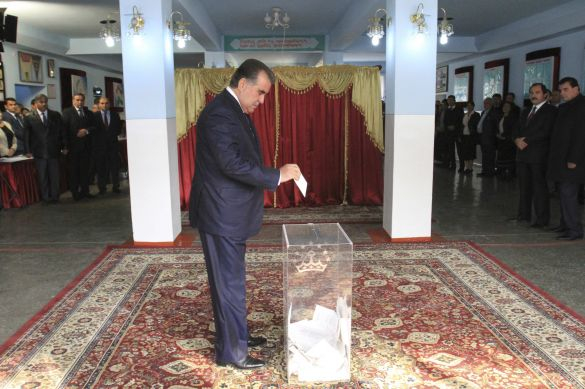 Many of the slogans chanted by participants at Monday's nationalist Russian March in Moscow portrayed migrants from the South as one of Russia's top problems.

On Oct. 26, a group of nationalists attacked a Tajik train bound for Moscow, breaking windows and shouting racist threats.

Russia has frequently used threats of deportation in the past to pressure Tajikistan on policy issues, including over the recent 30-year lease extension of Russia's largest military base abroad.

The Tajik parliament ratified the deal Oct. 1, and Russia pledged to provide significant financial resources to revamp the Tajik military and help secure its perforated border with Afghanistan.

Security along the border is crucial to Russia.

More than 75 tons of heroin are trafficked to Russia annually along the so-called Northern Route, which spans across Tajikistan, according to the United Nations Office on Drugs and Crime.

Russia has recently stepped up efforts to combat the drug trafficking problem, which the country's Security Council lists among the three main security challenges, alongside terrorism and illegal migration.

Tajikistan may serve as a source of all three of the listed threats, including terrorism, which is expected to get worse following the 2014 withdrawal of NATO forces from Afghanistan.

Recognizing these vulnerabilities, China has increased its presence in the region, with President Xi Jinping taking a tour of four Central Asian states in September. The move raised fears that China would attempt to compete with Russia there.

Given the dynamic security environment, Rakhmon, a former collective farm director who was described by a U.S. diplomatic cable as someone who "prefers to control 90 percent of a ten-dollar pie, rather than 30 percent of a hundred-dollar pie," is bound to face more challenges in his upcoming term.

"These elections do not represent a major divide," said Stanislav Pritchin, a researcher from the Central Asia Research center at the Russian Academy of Sciences. "The question is to what extent Rakhmon will be loyal to Moscow, and whether he will maneuver between Russia, China and the U.S.," he said.

A Moscow court on Wednesday rejected an appeal by the jailed Russian journalist Ivan Safronov against his 22-year jail sentence for treason earlier this...