Moving to Moscow from Dubai, the general manager of the Nikolskaya Kempinski luxury hotel, Burkhard Wolter, was initially put off by what he saw as the Russian capital's "slow pace."

Wolter's statement might confuse those who experience the intensity of daily life in Moscow. But from his vantage point — that of a newcomer to a town where hotels have to compete to attract traffic with a multitude of liquor-serving establishments — his lobby might seem a bit quiet.

Moreover, the building where Kempinski opened its second Moscow property faces the Federal Security Service headquarters in what is perhaps one of more subdued areas in town. And the Nikolskaya, with its soundproof windows and serene lifestyle, is in itself a rare alcove of peace and quiet in the busy city center.

But it has not always been so calm in the locale where the new five star facility is located. The hotel has gone through a turbulent reconstruction phase spanning six years.

Built in 1870 as an apartment house by Count Alexei Orlov-Davydov, a Duma deputy who escaped to France after the revolution, the building has also been home to a bookstore and chocolate boutique. Bringing the historical edifice back to life in the post-Soviet period was not easy.

"It took six years because everything was so neglected," said Ruben Grigoryan, president of Rutsog Invest, which funded the project. "It would probably have been easier to build a hotel from scratch instead."

One of the main challenges that the reconstruction team faced was accommodating a three-floor-high electrical substation that was located roughly where the hotel entrance is today. The substation supplied electricity to the Sokolnicheskaya metro line. An entrance to the Lubyanka station is still located on the north side of the building. 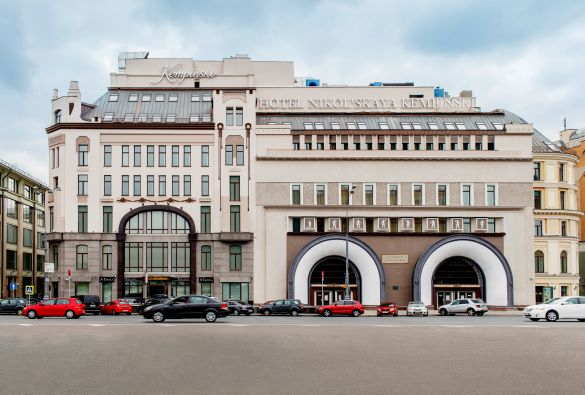 Nikolskaya Kempinski
The hotel building harbors an entrance to the Lyubyanka metro station.

It took two and a half years to build a new electrical hub nearby, only after which the reconstruction work could begin.

Now the five-star hotel has 211 rooms and suites as well as five restaurants and bars, including a cigar club. There is also a spa operated by the Swiss brand L. Raphael Spa, a gym and five conference facilities.

Rates at the Nikolskaya Kempinski start at $400 per night. The general manager declined to say how many bookings the hotel has had since its soft opening in May but specified that the rooms in the lowest price segment have seen the highest demand.

"Other hotels that are three years on the market are closing with an average occupancy rate of 68 percent," Wolter said. "That means if we are not hitting it this year, there is competition out there. We have to fight for our market share, we have to do promotion, we have to make sure that expectations are met and exceeded. But again, regardless of where you are, the most effective, long-term occupancy driving factor is loyal repeat guests."

Wolter, who previously spent two years as the head of a Kempinski hotel in Dubai, manages a staff of 250 at Nikolskaya. Most of them are new, though the employees at the chain's other Moscow property, the 21-year-old Balchug Kempinski, have the option of switching to this new location.

Many of the hotel's employees are familiar with the specifics of the local hospitality business, though Wolter is still trying to figure out how to use what he perceives as Moscow's leisurely pace to his advantage. There is more social life in Dubai hotels, he said, because they are some of the few places that have liquor licenses.

"Here you have 8,000 bars out there! Why should people come to a hotel bar? You have to think differently to make it happen," Wolter said of the Russian capital. "In Dubai you have to be short-term and effective. In Moscow's market you have to be consistent and mid-term."

The hotel will be located in a historical building on Nevsky Prospekt and will have 74 rooms, including 18 luxury suites, according to a company statement last week. There will also be three restaurants and bars, spa, rooftop pool, conference centers and boutiques on the first floor.

The reconstruction process is expected to last three years.

Jumeirah was in negotiations earlier to operate short term rental apartments in Moscow's Tsarev Sad multifunctional complex, but these talks ended without result, a company representative told Vedomosti. The hotel operator is continuing to look at other properties in Moscow.