MOSCOW — International Olympic Committee president Thomas Bach says Russian organizers of the upcoming Winter Olympics in Sochi should brace themselves for the toughest preparation period ahead.

Sochi marked the 100-day countdown to the games Tuesday night. 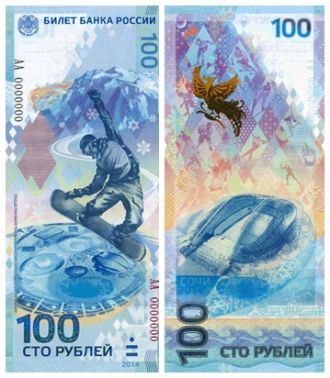 New banknotes for the Olympics show a snowboarder in mid tail-grab.

Bach said on Wednesday in remarks carried by the R-Sport news agency that "these 100 days will be the toughest ones in the preparations" for local organizers and volunteers.

Bach, who toured Olympic venues with President Vladimir Putin on Tuesday, told a group of Sochi volunteers that "what you have achieved so far is really fantastic."

Russia is spending $51 billion to deliver the games, making it the most expensive Olympics in history.

Wednesday's event in Sochi also included an unveiling of the uniform for more than 40,000 volunteers expected to work at the Olympics, which includes coats, trousers, gloves, shoes and backpacks in a rainbow smattering of colors. Bach said that the suits' "bright colors show Russian kindness and hospitality," Itar-Tass reported.

Material from The Moscow Times was included in this report.

Special-edition banknotes for next year's Winter Olympics in Sochi were unveiled Wednesday, with 100 days to go until the Games.

Twenty-million of the blue 100 ruble ($3.13) notes will be produced, with an unusual vertical design depicting a snowboarder and several of the venues in the Sochi Olympic Park.

It is unclear when the notes, which are legal tender but differ from the regular red 100-ruble notes, will enter general circulation. (RIA Novosti)