Moscow has angrily denied that one of its diplomats in Washington tried to recruit young Americans to spy for Russian intelligence agencies, calling the allegations a “horror story” reminiscent of the Cold War.

The spy flap centering around the 59-year-old head of a Kremlin-funded cultural exchange program raises the specter of a new dispute rocking already stormy relations between Russia and the U.S.

The FBI is investigating whether Yury Zaitsev, head of the Russian Center for Science and Culture, is a Russian intelligence officer who arranged all-expense-paid trips to Russia aimed at grooming young Americans, including students, political aides, nonprofit sector workers and business executives, according to Mother Jones magazine, which first broke the story.

The Russian Embassy in Washington and Zaitsev himself rejected the allegations and expressed concern that unknown people were trying to ruin efforts by Presidents Barack Obama and Vladimir Putin to mend and expand ties.

"It's a shame that Russian-American relations periodically echo the Cold War," Zaitsev, who refused to speak to Mother Jones on the issue, said late Wednesday in an interview with state news agency Itar-Tass. “Someone apparently wants to see the Iron Curtain fall between our two countries once again.”

“This kind of horror story very much resembles the Cold War era,” embassy spokesman Yevgeny Khorishko said in a statement released to Russian media. “A blunt attempt is being made to distort and discredit the activities of the Russian cultural center, which focuses on developing trust and cooperation between our two countries and people.”

He warned that “somebody intends to torpedo” a goal set by Obama and Putin at a Group of Eight summit in June to expand direct contracts between Americans and Russians so as to raise relations to a new level.

But Khorishko vowed that Moscow would not be deterred by the spy allegations. ”The Russian cultural center has been working to expand contacts and improve understanding between Russian and American citizens and will continue to do this work,” he said. 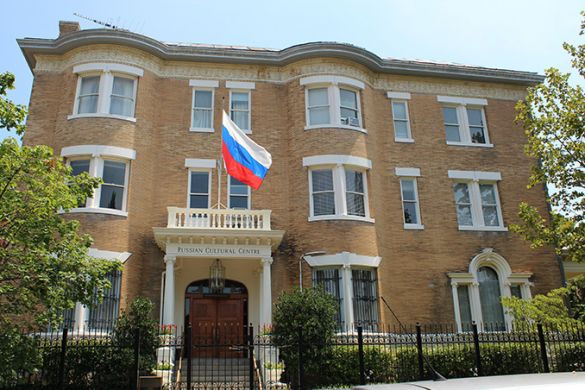 The Russian center is housed in a 1895 mansion purchased by Moscow in 1957. (rccusa.org)

Mother Jones and other U.S. media reported that FBI officials had met with people who traveled to Moscow and St. Petersburg on trips organized by the Russian cultural center and quizzed them on whether Zaitsev worked for Russian intelligence and whether any attempts had been made to recruit them during their stay. The media reports, citing trip participants, said all had denied that the Russians had sought to recruit them.

The FBI refused to comment on whether it had opened an investigation into Zaitsev.

Zaitsev has diplomatic immunity, so U.S. prosecutors could not press charges against him if the FBI were to conclude that he broke the law. But the State Department could withdraw his immunity, forcing the Russian Foreign Ministry to recall him to Moscow.

The cultural center has brought 128 Americans on “short-term, fact-finding trips” to Russia since the exchange program was created under a presidential decree in 2011, according to program information on the center's website. The global program, which seeks participants aged 25 to 35, has also invited 1,219 people from other countries, including 283 from Europe, 157 from Asia and the Middle East, 29 from Africa and South America and 750 from other former Soviet republics.

About 25 people participated in each trip from the U.S., and they stayed at five-star hotels and met with senior politicians like the mayors of Moscow and St. Petersburg and Federation Council Deputy Speaker Alexander Torshin, Mother Jones said.

Zaitsev, a St. Petersburg native, said in the interview that trip participants were being targeted in a “witch hunt” rooted in a U.S. fear of Russia. “I think it is simply unacceptable that they are ordered to tell what, why, how and why,” he said.

In a reminder of lingering suspicions in both countries, Zaitsev pointed out that the U.S. government also organizes exchange programs that bring young Russians to the United States, and he insisted that his program was as transparent as any of those. "All of the information about our programs and projects is publicly available on our website," he said.

Zaitsev's path to Washington is not clear from his organization's website. He received a doctorate in economics from the Leningrad Technological Institute in 1980 and then worked in several government-run student organizations until the Soviet collapse, according to his online biography. He worked in unspecified “leadership positions in private companies" from 1992 until he was appointed head of the cultural center in July 2010. He is married and has one adult son. 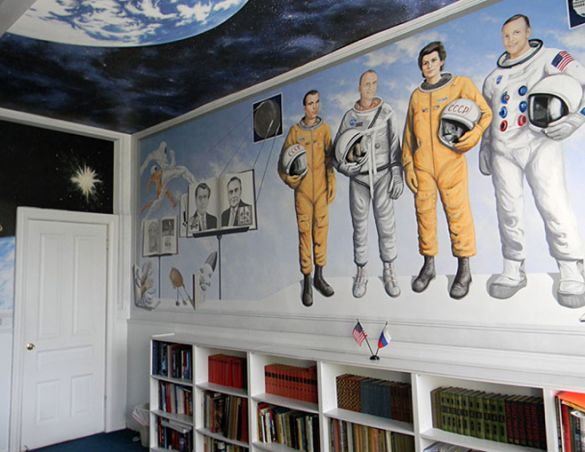 The center's second floor has a space library focusing on Russian-U.S. cooperation. (rccusa.org)

But Zaitsev faces a formidable task. Relations between the Russia and the U.S. have soured since Putin returned to the presidency last year, with Washington deploring a Kremlin crackdown on the opposition and a ban on U.S. parents adopting Russian children. Moscow for its part has assailed the U.S. Magnitsky blacklist of Russian officials accused of human rights violations.

The tensions have cast a shadow over yearlong events mean to celebrate the 80th anniversary of diplomatic relations.

The Russian cultural center, also known as Rossotrudnichestvo, is “the official home of Russian culture in the United States” and was created in 2001 under a bilateral agreement aimed at fostering relations, according to its website.

It is housed in a 1895 mansion located 20 minutes by foot from the White House that the Soviet government bought in 1957 and used for the embassy's consular services for 40 years.

The first floor contains the Moscow Room, decorated in cream and gold leaf and with paintings of the Bolshoi Theater, the Kremlin, Moscow State University and Christ the Savior Cathedral; as well as the Hall of Mirrors, with two gala portraits of Peter the Great and Catherine the Great; and the Russian-American Room, with a colorful panorama depicting key moments in Russian-American relations.

The second floor hosts the Pushkin Library, with more than 2,000 books, 300 movies on video and DVD and more than 100 audiobooks; a space library focusing on Russian-U.S. cooperation in space exploration; and classrooms offering Russian-language lessons.

The third floor contains two guest rooms, while the basement has a kitchen that prepares meals for the center's receptions and offers classes on Russian cuisine.

The joint exercises near the Tajik border with Afghanistan involve 2,500 troops from Russia, Tajikistan and Uzbekistan.
olympic asylum

Belarus Olympic Athlete 'Happy to be in Safety' in Poland

The athlete has been at the center of a diplomatic drama after she publicly criticized her coaches.
OPEN FOR DIALOGUE

The comments came after the U.S. and Russia clashed over staffing at their respective embassies this week.
CONTROVERSIAL CASE

Ruling seen as a blow to Russia’s investment climate.