TBILISI — Georgia elects a new president Sunday in a vote that will end Mikheil Saakashvili's decade-long rule but may provide only a brief respite from political uncertainty in the former Soviet republic.

Victory for the 44-year-old philosopher would cement Georgian Dream's grip on power. But the clarity may not last long as Ivanishvili, a billionaire businessman and fierce political enemy of Saakashvili, who has said he himself will stand down after the vote. 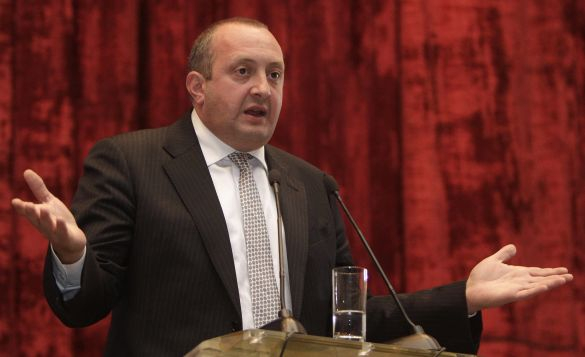 The impending exit of the two rivals makes it hard to tell who will call the shots in Georgia, a country of 4.5 million people which fought and lost a five-day war with Russia in 2008.

With pipelines that carry oil and gas from the Caspian Sea toward Europe, bypassing Russia, Georgia is strategically important to both Moscow and the EU. Under Saakashvili, who by law is not eligible to seek a third term, it strongly allied itself with the U.S. and pushed to join NATO, though membership remains a distant prospect.

Georgia elects a new president Sunday in a vote that will end Mikheil Saakashvili’s decade-long rule and test confidence in the ruling Georgian Dream coalition led by billionaire prime minister Bidzina Ivanishvili.
Twenty-three candidates will run in the election, the largest number since the former Soviet republic held its first presidential election in 1991. Saakashvili is barred from running after serving two terms.
Here are some facts on the main candidates and the rules.
Georgy Margvelashvili, 44, Georgian Dream’s presidential candidate is the front runner, according to opinion polls.
Margvelashvili, who holds a doctoral degree in philosophy from Tbilisi State University, was a rector of the Georgian Institute of Public Affairs. Ivanishvili appointed him as education minister after last year’s parliamentary election and later promoted him to deputy prime minister.
David Bakradze, 41, was nominated by Saakashvili’s United National Movement party and leads its group in parliament, where he was speaker from 2008 to 2012.
Bakradze, a mathematician who according to recent polls enjoys the highest favorability rating among opposition politicians, has accused the Georgian Dream government of failing to deliver on its economic and social promises.
Nino Burjanadze, 49, was one of the leaders of Georgia’s 2003 “Rose Revolution.” When Saakashvili was elected president,, she became speaker of parliament but resigned in early 2008, criticizing the president’s record on democracy and forming her own opposition party.
A lawyer who lists former British Prime Minister Margaret Thatcher among her idols, Burjanadze served as an interim president twice, for 40 days each time. She led street protests that came to a violent end in May 2011, when riot police broke up a demonstration on the capital’s Rustaveli Avenue.
Burjanadze accuses the government of betraying its election promise to restore justice and criticizes it for failing to re-engage fully with Russia.
Electorate: The Central Election Commission, or CEC, says there are about 3.5 million eligible voters in the Caucasus nation of 4.5 million.
Voting Hours: Polls open at 8 a.m. and close at 8 p.m., (7 a.m. to 7 p.m. MST). The first official preliminary results are expected within hours of polls closing.
Rules: Georgian presidents are elected every five years. The presidency is limited to a maximum of two terms.
There is no turnout threshold for an election to be valid.
A candidate must get at least 50 percent plus one vote to be elected outright in the first round.
A runoff is held within two weeks if none of the candidates wins a simple majority in the first round.

Margvelashvili, formerly an education minister and vice premier, is a relative unknown. His main foreign policy goal is to pursue close ties both with the West and with Russia — a balance that the country has long failed to achieve.

The political uncertainty has sharply slowed economic growth and is compounded by the fact that constitutional amendments to curb some presidential powers, for example to form the government or fire members of the cabinet, will come into force after the election.

"We expected more from this government, of course, but I think when a new president will be from the same coalition as the prime minister, they will be able to fulfill their promises," said Gela Nakashidze, a 53-year-old unemployed man in the capital, Tbilisi.

The two other leading candidates — all three were profiled in Georgia's edition of Forbes magazine under the headline "Who?" — are David Bakradze, a member of Saakashvili's United National Movement, and Nino Burjanadze, who in 2003 helped lead the Rose Revolution that brought Saakashvili to power.

Burjanadze later fell out with the president, particularly over his handling of the disastrous war with Russia, and favors rebuilding ties with Moscow and setting aside NATO ambitions that she says are "an illusion."

The rivalry between Ivanishvili and Saakashvili, whose support of close ties with the West helped him overthrow former Soviet Foreign Minister Eduard Shevardnadze in 2003, has slowed implementation of laws and put off investors.

After years of a robust investment-driven growth, Georgia's gross domestic product grew just 1.5 percent in the second quarter this year, down from 8.2 percent in the same period a year ago.

"The current economic situation in Georgia is not as good as we want it to be, and there is not much visibility as how things could develop in 2014," said Fady Asly, chairman of the International Chamber of Commerce in Georgia.

Margvelashvili hopes to benefit from better ties with Russia forged by Ivanishvili. The tycoon prime minister built his business career in Russia but now lives in Georgia where, at one of his homes, he keeps penguins and kangaroos in a private zoo.

Russia has resumed importing Georgian wine, mineral water and fruit, lifting a ban imposed in 2006. But some economic and political analysts say this will boost the economy only in the long run.

According to a poll by the U.S. National Democratic Institute, or NDI, Margvelashvili is set to win 39 percent, followed by Bakradze with 18 percent and Burjanadze with 13 percent, suggesting a second round runoff will be needed.

Margvelashvili said a week before the vote that he would not stay in the race if he did not get more than half the votes in the first round: "It will be a miracle if the second round is necessary, and I do not want to participate in a miracle." 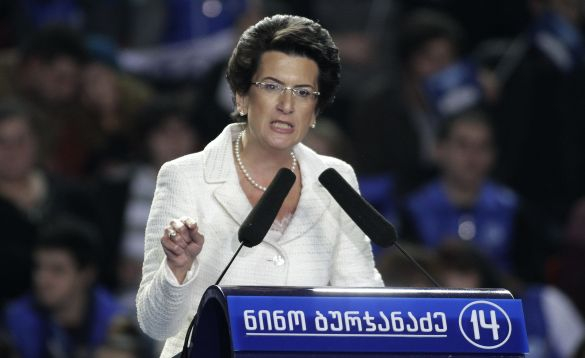 But analysts said this could be a tactic to encourage voters to turn out.

Some analysts say that even if Ivanishvili steps down as prime minister by the end of this year as promised, he will still pull the strings, largely through his commitment to the Georgian Co-Investment Fund which will target investment into energy, manufacturing, tourism and agriculture. At $5.3 billion, his fortune is equivalent to nearly one-third of Georgia's economic output.

More than 70 percent of Georgians polled by the NDI in late August and early September said they disapproved of his move to quit.

"My planned departure from politics will only help attracting investment," Ivanishvili said last month at a presentation of the fund, to which he has committed $1 billion of his own money.