In the latest step by authorities to fight unlawful immigration following an anti-migrant riot earlier this month, the city's police chief said that Moscow police will raid apartments reportedly occupied by illegal migrants every Friday until the end of the year.

The initiative, announced by top cop Anatoly Yakunin on the order of Mayor Sergei Sobyanin, was promptly condemned by the head of Russia's top migrant organization, who said it would instigate "immigrant phobia" in society. Opposition leader Alexei Navalny also ridiculed it, saying it would breed corruption — and allow illegal migrants to hide.

As the government rolls out more anti-migrant measures in reaction to the riot in Moscow's Biryulyovo district, nationalists have stepped up their activities as well, with police preventing more than 120 activists, some armed with baseball bats, from raiding residences of migrants outside Moscow over the weekend. 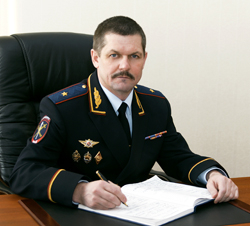 As part of the operation, city police working jointly with vigilantes, private security guards and other law enforcement organizations will raid apartments where migrants are reported to be living and patrol the streets in search for migrants, Yakunin said.

About 130,000 apartments in Moscow are leased illegally, Sobyanin told the meeting, RIA Novosti reported. All of them will be examined by the year's end, Yakunin said.

"Until we know who lives in our houses, until the major part of them are registered, there will always be serious problems with public order," the mayor said.

The new police measures were triggered by a riot of more than a thousand local residents and nationalists last weekend in Biryulyovo to protest the stabbing death of 25-year-old Yegor Shcherbakov on Oct. 10. The rioters blamed the killing on a migrant who worked at a local vegetable warehouse.

Police later detained Azeri national Orkhan Zeinalov for the crime, and initially he admitted his guilt but Thursday rescinded the confession. On Saturday, Azerabaijan sent Russia the second of two notes of protest over Russian authorities' failure to organize a meeting of Azeri diplomats with Zeinalov, Interfax reported.

Muhammad Amin Madzhumder, head of the Russian Migrants Federation, told The Moscow Times on Sunday that he was "disappointed with the initiative" of police to carry out raids on migrants.

"Recently, our authorities have set a course for immigrant phobia," Madzhumder said.

"Not only the police hold raids, but they take nationalists on them, which is a very dangerous trend," he said, in an apparent reference to the numerous vigilante groups that participate in raids on residences where illegal migrants supposedly live and report them to police and migration officials.

In one example of cooperation between the authorities and civilians in finding illegal migrants, top Moscow region migration official Oleg Molodiyevsky on Saturday offered to let residents of the local town of Dolgoprudny take part in anti-migrant raids, Interfax reported.

The confusion that could be engendered by such raids was also on display over the weekend.

On Sunday, police detained five organizers of a civilian anti-migrant raid in the town of Khimki, just north of Moscow, and rounded up some 40 participants at a local park, nationalist leader Dmitry Dyomushkin told Interfax. But police later said that only three organizers were briefly detained after police mistook them for "apartment burglars," the news agency reported.

Opposition leader Alexei Navalny, an outspoken proponent of stricter immigration policies, ridiculed the idea of police raiding apartments every Friday, saying it would only serve to increase corruption.

"The Interior Ministry simply made an official announcement: on Fridays, we will be visiting construction sites and markets, collecting dough. So prepare envelopes and hide migrants so that we 'do not find' them," Navalny wrote Sunday on his Livejournal blog.

Anton Orekh, a commentator on radio Ekho Moskvy, said in a blog entry Friday that he wondered whether the declared campaign meant that police "can break into any apartment."

Some observers have accused the authorities of encouraging anti-migrant sentiment in an attempt to redirect popular discontent with government policies. In a demonstration of rising nationalist activity, authorities prevented nationalists in the Moscow region towns of Lyubertsy and Khimki from holding anti-migrant raids over the weekend, media reports said.

In Lyubertsy on Saturday, police detained 78 people armed with baseball bats, 60 of them minors, Interfax reported. The young people had gathered to beat migrants in reaction to the suspected beating and rape of a local woman by three Kyrgyz nationals Thursday in the neighboring district of Novokosino.

Most of the adult participants were fined for being drunk in a public place.