A Kirov court Wednesday issued suspended sentences to opposition leader Alexei Navalny and his business partner Pyotr Ofitserov, in a move some analysts say is a sign the Kremlin does not want to risk a new wave of protests ahead of the 2014 Winter Olympics in Sochi.

On Wednesday, the Kirov Region Court in central Russia overturned the July 18 verdict issued by the Leninsky District Court of Kirov, which sentenced Navalny and Ofitserov to five and four years in prison, respectively, for allegedly stealing $500,000 worth of timber from state-owned company KirovLes in 2009.

The court replaced the sentences with suspended ones and ordered Navalny and Ofitserov not to change their places of residence and to register with police twice a month. A minor violation will see the court reinstate their original prison sentences.

Defense lawyers said they would appeal the verdict.

While the latest ruling was seen by some as a minor victory for Navalny, as it kept him out of prison, others said it had more to do with the Kremlin trying to avoid exacerbating relations with the West than with Navalny’s popularity in recent Moscow mayoral elections.

Opposition-leaning political analyst Stanislav Belkovsky, said the verdict was a nod to the West ahead of the Winter Olympics in Sochi in February 2014.

“This means that we are now living in the perestroika-2 era,” Belkovsky said, adding that the ruling signaled a general thawing of the political climate prompted by the upcoming Olympics and cooperation with the West in the Syria conflict.

The softer line may also stem from President Vladimir Putin’s newfound image as a peacemaker and desire to win a Nobel Peace Prize for his proposals on how to resolve the Syria conflict, Belkovsky said.

Liberal politician Boris Nemtsov also said that the relatively lenient sentence was issued because of Putin’s reluctance to spoil relations with the West ahead of the Olympics. He added that the politician’s strong showing in the Sept. 8 mayoral election was a secondary factor.

But Nemtsov dismissed the idea that the Kremlin is switching to a more lenient policy. 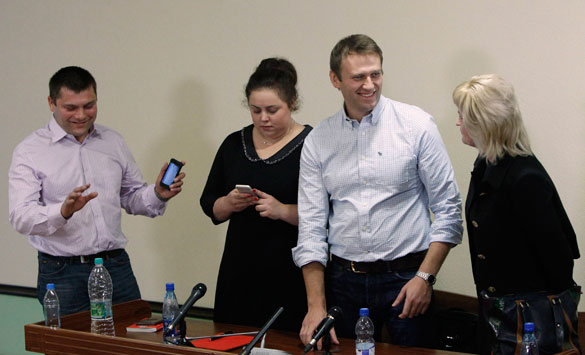 Alexei Navalny pictured before and after a Kirov court announced his suspended sentence on Wednesday.

“I am glad [that Navalny will not be imprisoned] but I do not understand the universal euphoria,” he said. ‘‘I believe this trial to be a political reprisal.”

The latest ruling has also triggered speculation about whether the conviction would strip Navalny of the right to run in elections. In accordance with amendments passed in July 2012, people convicted of grave crimes are indefinitely banned from running for public office.

Although the Constitutional Court ruled last Thursday that such a ban was illegal, corresponding amendments have not yet been made to the original law.

Navalny, who has led tens of thousands of people into the streets to protest President Vladimir Putin’s rule since late 2011, and who came in second with 27 percent of the votes in Moscow’s mayoral elections Sept. 8, has declared his intention to run for a Duma seat in 2014 and for president in 2018.

He seemed to have dubious feelings about Wednesday’s ruling, however.

Talking to journalists outside the court, he said the ruling demonstrated “that at the very least, authorities can be pressed to replace an unjust prison sentence with a suspended one,” Interfax reported.

But in a post on his LiveJournal blog later, he said it “would be strange to call this a victory.”

“The main goal set by the Kremlin in undertaking these criminal cases — to bar me from participating in elections — has technically been achieved,” he wrote.

Putin’s spokesman Dmitry Peskov denied that the president could have influenced Wednesday’s ruling.

“This is not in the president’s power,” he told Interfax.

In theory, there is a chance that Navalny could be included in the president’s amnesty timed to coincide with the Day of the Constitution on Dec. 12.

Veteran human rights defender Lev Ponomaryov was confident that the amnesty would apply to Navalny, saying by telephone that he was “90 percent sure” Navalny would be granted amnesty.

Belkovsky also said that Navalny would likely be included in the planned amnesty, and that his conviction would have little impact on his political career. 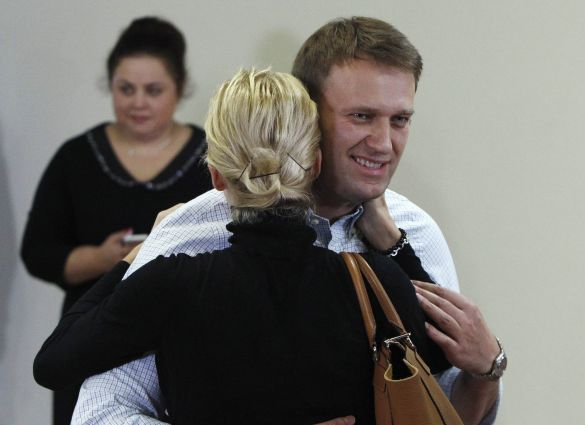 Navalny embracing his wife after the court issued a suspended sentence.

The analyst said the authorities had faced a tough choice, with both alternatives being bad for the Kremlin. A prison sentence would have hurt Putin by mobilizing Navalny’s supporters, while the suspended sentence will be seen as a weakness caused by the politician’s unexpectedly high percentage in the Sept. 8 mayoral election, he added.

An acquittal had been ruled out by most analysts because it could have been interpreted as a defeat by the Kremlin and its concession that the charges were groundless. But Belkovsky said an acquittal could have hurt Navalny’s reputation because he would have been accused of being a Kremlin stooge.

The suspended sentence is still a more advantageous decision for the government, though nobody will thank Putin for it, Belkovsky said. Even if Navalny is not granted amnesty, he can still take part in politics indirectly, by throwing his support behind a certain candidate. Navalny said earlier this week that he planned to do that for next year’s City Duma elections.

“If someone there thinks that I will now shy away from every rally and activity for fear of [committing] an administrative offense that will turn the suspended term into a real one, they should not,” Navalny wrote on LiveJournal on Wednesday.

According to Belkovsky, however, Navalny will actually have a harder time conducting political campaigns out of prison, since he will be forced to make difficult decisions that could have been avoided if he had been sent to prison.

His participation in a major nationalist rally called the Russian March on Nov. 4, for instance, would alienate his liberal supporters, though a decision not to take part would put him at odds with nationalists, Belkovsky said.

“Participation in elections is not just ‘being a candidate,’” he wrote on LiveJournal, adding that “we will find the proper format for our work.”

In light of the Constitutional Court’s ruling last week, however, he might not have to seek a new format. Federation Council Speaker Valentina Matviyenko and State Duma Deputy Speaker Igor Lebedev said Navalny would be eligible to run for office after serving his five-year sentence, Interfax reported.

Lawyer Vadim Prokhorov, an expert in election law, said that last Thursday’s ruling by the Constitutional Court effectively invalidated the July 2012 law by deeming it unconstitutional.

This means that only convicts who serve real prison terms are barred from running in elections, Prokhorov said.