I stopped smiling at strangers in the winter of 1995.

Shortly after arriving in chilly Moscow from the warmth of the U.S. Midwest, I noticed an elderly woman staring at me in the metro.

I automatically smiled at her.

The woman peered back at me, expressionless, from under a thick winter coat and warm cotton shawl.

"She probably didn't see my smile," I thought to myself, widening my lips and turning my face more directly toward her.

The woman did see the smile. And she looked at me as if I were insane.

At that moment I realized that smiling at strangers was verboten in Russia — and I stopped.

This incident came back to mind the other day as I nodded and chuckled my way through a list titled "You Know You've Been in Russia Too Long When …" in The Huffington Post. The list, compiled by Steve Caron, an expat who has lived in Russia since the early 1990s and owner of an online travel agency, sindbad.ru, includes gems like:

* You know you've been in Russia too long when … you know more than 60 Olgas.

* You drink the brine from empty pickle jars.

* You see every vehicle as a potential taxi.

* You're excited when you accomplish three things out of a list of 10 to do that day, and consider it a very effective day!

With apologies to Steve Caron, the staff at The Moscow Times has prepared a list of our own 14 favorites. All photos are by longtime Moscow Times photographer Igor Tabakov.

You've been in Russia too long when …

1. You only smile at friends and wonder about the psychological well-being of strangers who grin at you. 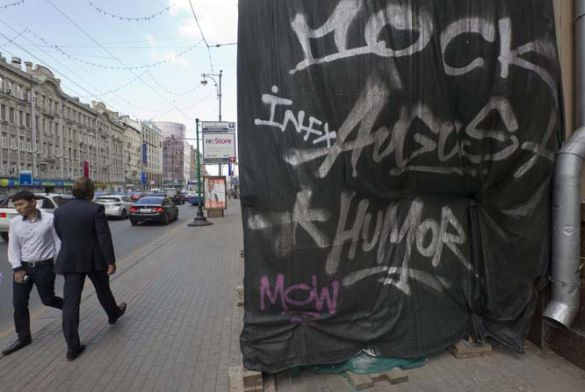 Don't expect to get any smiles from strangers on Tverskaya-Yamskaya Ulitsa.

2. You call out "molodoi chelovek" or "devushka" to get a stranger's attention, even if the person turns out to be elderly. 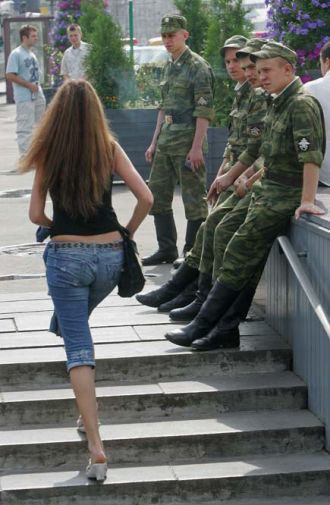 A group of conscripts watching a young woman emerge from the metro. To get acquainted, all one of them would have to do is call out, "Devushka!"

3. You think it's normal to get five weeks of paid vacation per year — and whine when the government wants to cut short the two weeks of public holidays at New Year's. 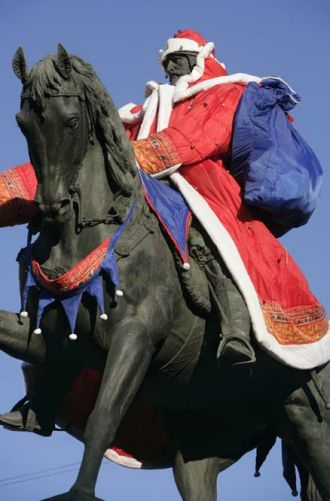 The statue of Moscow founder Yury Dolgoruky getting festive for New Year's with a Grandfather Frost costume and a sack of gifts. The statue is located opposite the City Hall building on Tverskaya Ulitsa.

4. Strangers ask you for directions — and you sullenly reply, "Ne znau, ya ne mestny" (I don't know, I'm not from around here). 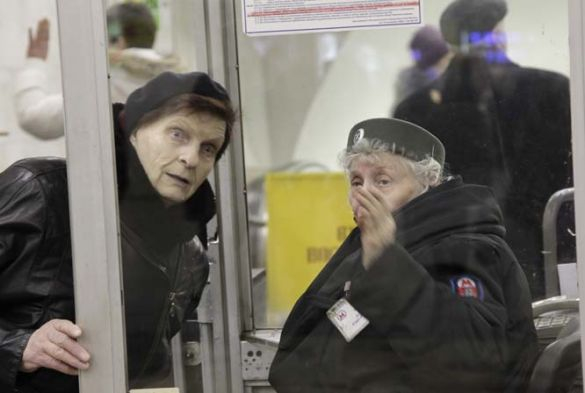 A passenger asking for directions from a metro attendant.

5. You root for financial stability in the West solely because you don't want to see your ruble bank account lose value. 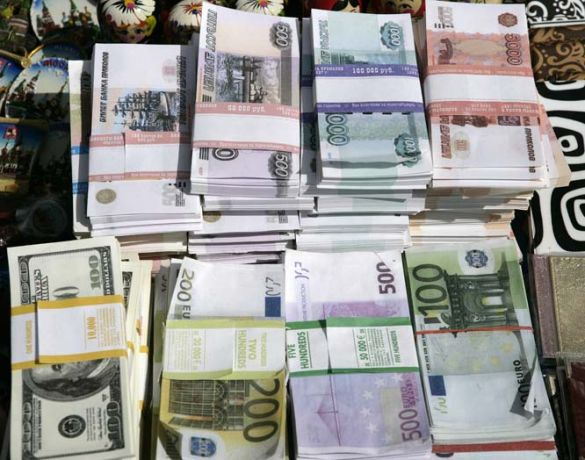 Bundles of fake money being offered for sale from a souvenir stand near Red Square.

6. When the plane lands, you don't wait for the "fasten seat belt" sign to be switched off. 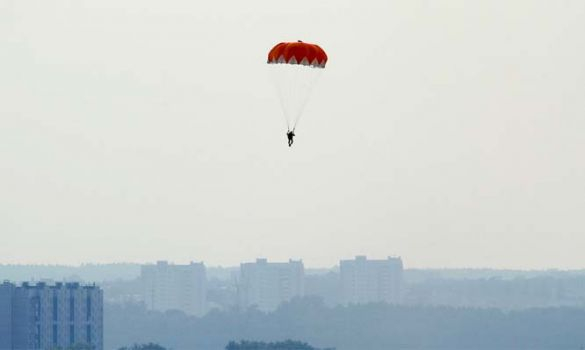 Here's what might happen if you get out of your plane seat too early. This parachutist, however, is just one of the many thrill-seekers who jump out of small planes over Moscow's northwestern Mitino district during the summer.


7. You think 400 rubles for a drink is very "demokratichna" (democratic). 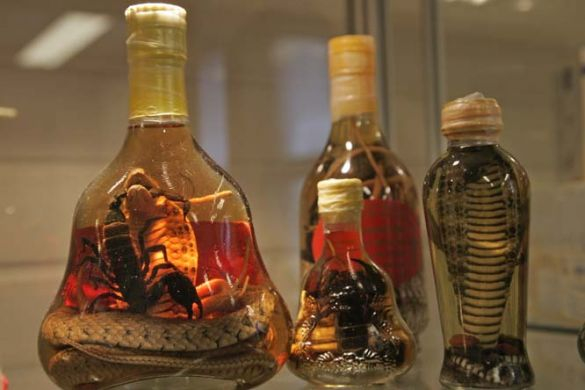 Alcoholic drinks come in all varieties in Russia, including these collectable bottles seized by customs officials at Sheremetyevo Airport over food-safety worries.

8. You have more friends on Vkontakte than on Facebook. 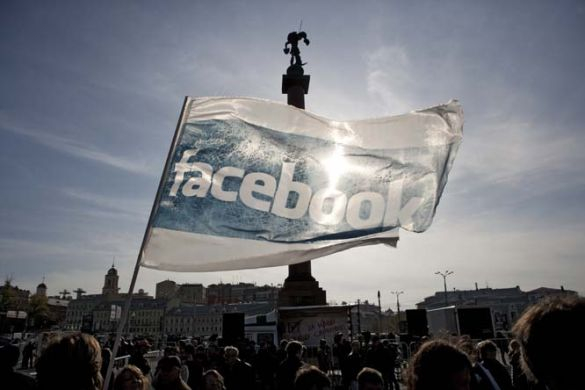 Vkontake may be the most popular social networking site in Russia, but anti-Kremlin protesters raised the flag to Facebook after organizing their Moscow mass demonstrations through the U.S.-based site in 2011 and 2012.

9. You know the meaning of ZAGS, ZhEK and ZhZh. 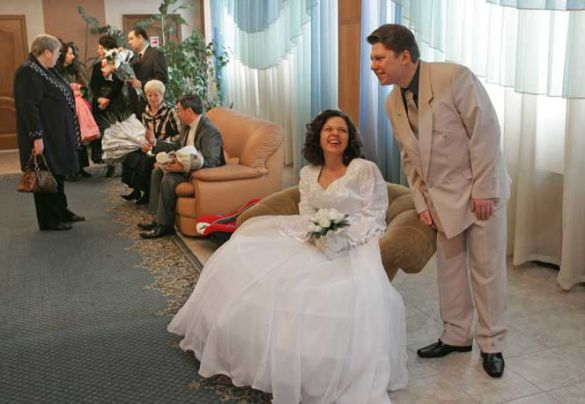 A young couple tying the knot at a Moscow ZAGS, the wedding civilian registry office. ZhEK is the government authority offering housing and communal services, while ZhZh is the abbreviation of the popular LiveJournal blogging site.

10. You stop buying vegetables and fruits in the fall because you have a friend with a dacha. 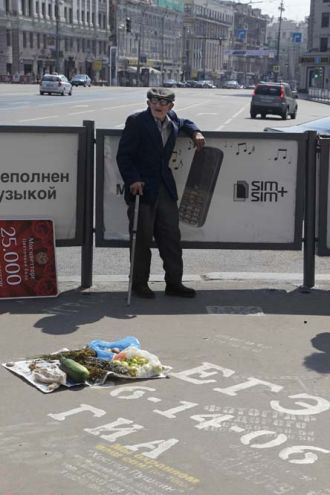 An elderly pensioner selling his dacha-grown produce on a sidewalk in downtown Moscow.

11. You think that parking on the sidewalk is normal. 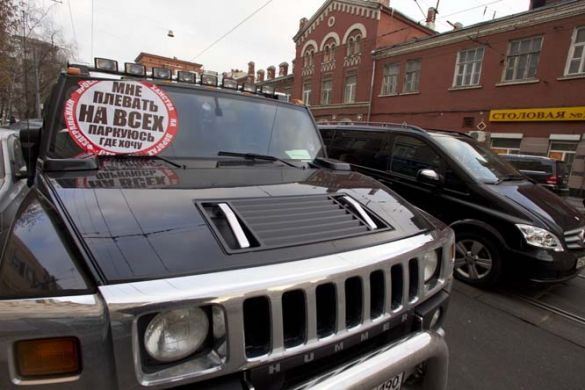 The driver of this Hummer who parked on a Moscow sidewalk has been targeted by a group of activists opposed to bad parking. The activists have slapped a sticker on the car's window reading, "I don't care what anyone says. I park wherever I want." 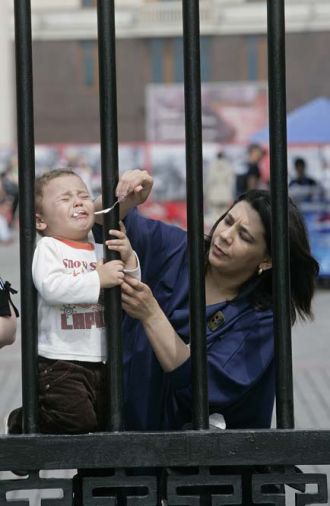 This boy clearly doesn't want to eat the yogurt being offered by his mother at Alexander Garden near the Kremlin walls. But it is unclear whether mom checked the expiry date first.

13. You can complete a whole sentence using only acronyms. 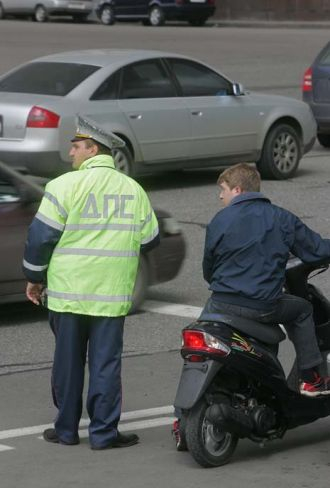 14. You consider tea and bread a basic human right. 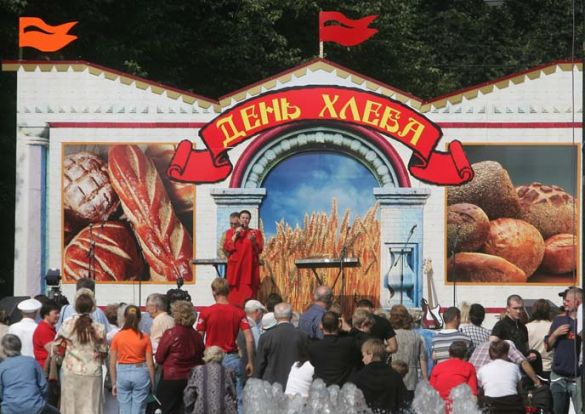 Bread is so popular that Moscow's Sokolniki Park hosts an annual festival dedicated to Bread Day.


One last word on smiling. Although I adopted a stern expression in public for years, it struck me after a while that this unsmiling person wasn't me. I'm naturally happy, and I like to smile.

So one summer day I threw aside fears of being labeled nuts as I watched a young cashier with long, black hair silently ring up my purchases at a grocery store.

"Where's your smile?" I asked, grinning.

The woman didn't flinch. "I always look this way," she said sourly.

That did the trick. The woman smiled.

I began to smile again — at work, on the street, in restaurants. No one has called me crazy. Only one person flat-out refused to smile: the towel attendant working at the swimming pool at the Moscow Country Club. When I asked her where her smile was at 7 o'clock in the morning, she snapped, "At home."

A St. Petersburg court on Tuesday recognized the Russian human rights NGO Vesna as an extremist organization, the group announced in a statement, a move...
Home front

Do Russians support the war in Ukraine? This question has been discussed intensely since the invasion in February. According to surveys from major Russian...