Bulgaria is a culture that has long had strong ties to Russia, both linguistic from their shared Slavic roots as well as cultural from their Orthodox Christian heritage. As part of this cultural exchange, cooperation between the Bulgarian and Russian cultural ministries has resulted in the arrival at the State Historical Museum of a new exhibit focusing on Ancient Thrace, a culture totally alien to both modern Bulgaria and Russia. 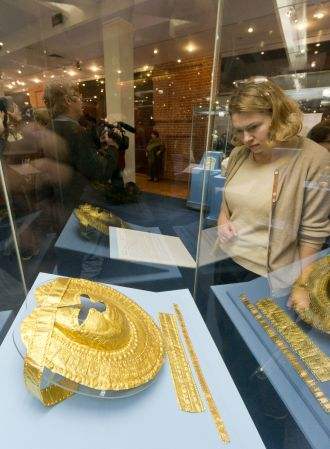 Precious artifacts from eight centuries of Thracian history have been brought from several Bulgarian museums.

"Deep brotherhood and union have always been felt between Bulgaria and Russia, which share a common Slavic culture and language," Russian Culture Minister Vladimir Medinsky said Tuesday at the opening of the exhibit, "Thracian Gold from Bulgaria. Resurrected Legends." Also present at the event were Bulgarian Culture Minister Pyotr Stoyanovich and the Bulgarian ambassador to the Russian Federation, Boiko Kotsev.

Members of the Bulgarian emigre community in Moscow were out in force at the gallery opening at the State Historical Museum, and it seemed that most of those in attendance were already well acquainted. Bulgarian accents were quite prominent throughout the evening, and startling for those not used to them — though a Slavic language like Russian, Bulgarian sounds more like Southern European languages such as Greek and Italian in intonation and pronunciation.

The Bulgarian officials were quick to affirm their agreement with Medinsky's message of cultural unity, commenting on the long-standing ties between the two governments as well as the shared culture and history of the two nations. The Bulgarians also were quick to claim the cultural heritage of Ancient Thrace, talking of the great beauty of the objects in the exhibit and their place in the culture and history of Bulgaria.

Bulgarian Ambassador Boiko Kotsev described the artifacts as “a unique exhibit, a pearl of European and world art.” The exhibit is made up of widely varying artifacts from a period stretching from about 400 B.C. to A.D. 400, in fact stretching well beyond the era commonly referred to as Ancient Thrace.

Historians generally use the label “Ancient Thrace” to describe the culture that was dominant in the Balkans between about 500 B.C. and A.D. 100, particularly in the territory roughly corresponding to modern-day Bulgaria and Romania. While Roman and Greek sources typically lump them together as “Thracians,” modern research suggests that the Thracians were actually a loosely related group of tribes such as the Bessi, Odrysae, and Getae, who all had their own distinct cultures and dialects. None of the tribes of Ancient Thrace were in any way linguistically or culturally related to the Slavic peoples now residing in Bulgaria: Slavs moved into the region in the 6th century, bringing new languages and customs. 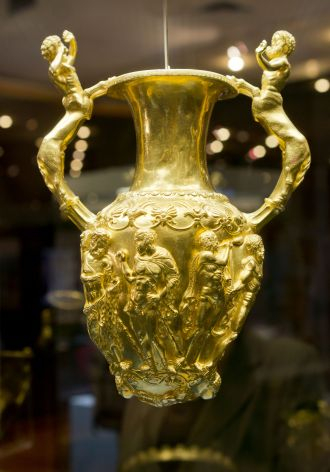 Precious artifacts from eight centuries of Thracian history have been brought from several Bulgarian museums.

The artifacts on display at the State Historical Museum highlight the immense cultural diversity of Ancient Thrace: Gold masks like the famous Mask of Agamemnon are displayed next to saddle ornaments resembling those of Ancient Scythia, while red figure pottery like that of Athens stands next to Persian-style helmets. Artifacts from later in history show great Roman influences following the region's absorption into the Roman empire, and eventually Christian symbols begin to replace the Pagan motifs that were prevalent in Thrace throughout antiquity.

The exhibit, as its name suggests, focuses mainly on gold objects. While these rare precious objects do not give a terribly good sense of what Thracian culture was actually like and how Thracians actually lived, they are extremely beautiful and worth checking out even for those with little interest in ancient history.