PARIS — Tense negotiations have begun on a proposed UN resolution that would put Syria's chemical weapons under international control and end a diplomatic stalemate over a deadly Aug. 21 poison gas attack, a French official said Wednesday.

The plan for Syria to relinquish its chemical weapons, initiated by Russia, appeared to ease the crisis over looming Western strikes against Bashar Assad's regime in Damascus, only to open up new potential for impasse as Moscow rejected U.S. and French demands for a binding UN resolution with "very severe consequences" for noncompliance.

The French official close to the president, who spoke on condition of anonymity because negotiations remained sensitive, said Russia objected not only to making the resolution militarily enforceable, but also to blaming the Aug. 21 attack on the Syrian government and demanding that those responsible be taken before an international criminal court. 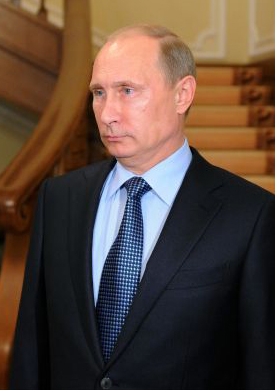 Putin after a meeting outside Moscow on Syria’s chemical weapons.

Wary of falling into what the French foreign minister called "a trap," Paris and Washington are pushing for a UN Security Council resolution to verify Syria's disarmament. Russia, a close ally of Syrian leader Bashar Assad and the regime's chief patron on the international stage, dismissed France's proposal on Tuesday.

"We think that the proposal came together quickly, in haste," Orlov told France Inter radio. "It's sure there are chemical weapons on both sides. The important thing is to forbid them, put them under international control. Then we will see who uses them."

Meanwhile, Russia's parliament on Wednesday urged the U.S. not to strike Syria, calling any military action in Syria a "crime against the Syrian people," Reuters reported.

In a declaration adopted unanimously by the State Duma, Russian lawmakers said air strikes in Syria would cause “new civilian deaths, more destruction of vital infrastructure and ultimately an irreversible humanitarian catastrophe.”

The nonbinding declaration by the Duma echoed the vehement opposition to U.S. military action of President Vladimir Putin and Russian officials.

The statement also warned that a strike could "place nuclear and chemical security in the region under threat," a reference to Syria's chemical weapons and a small reactor containing radioactive uranium, Reuters reported.

Domestic support for a strike is uncertain in the U.S., even as President Barack Obama seeks congressional backing for action, and there has been little international appetite to join forces against Assad.

In a nationally televised speech Tuesday night, Obama told Americans that diplomacy suddenly holds "the potential to remove the threat of chemical weapons" in Syria without use of force, but he declared that the U.S. military would "be ready to respond" against Assad if other measures fail.

Obama said he had asked congressional leaders to postpone a vote he has been seeking to authorize the use of military force against Syria. The president pledged that any military action would not involve deploying ground combat troops or waging a prolonged air campaign. 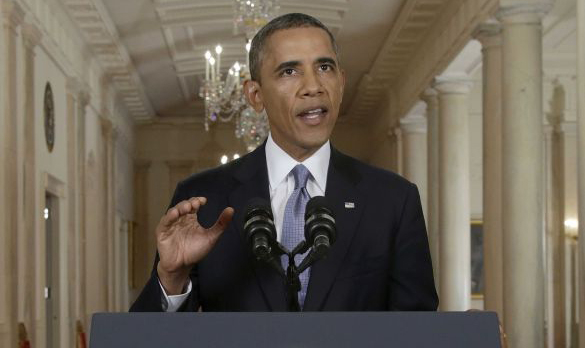 For many in the Syrian opposition who held out hopes that Western strikes against Assad would tip the civil war in the rebellion's favor, Obama's decision to seek a diplomatic resolution was a disappointment.

"We believe the regime is just buying more time, is just trying to fool the international community, is just trying to get out of this situation," said Loay al-Mikdad, spokesman for the Free Syrian Army, a loose-knit alliance of rebel factions that is backed by the West.

"We don't believe that this delay for any kind of intervention will stop the regime from killing Syrian people or be for the Syrian people's benefit. It will give Assad more time, and every minute, every day, every hour that passes will cost us more blood and Bashar will continue killing and nothing will change," he said

But Obama's decision won the applause of Assad's close ally Iran, which has provided military and financial support to the Syrian regime since the revolt began in March 2011.

"We hope that the new U.S. attitude toward Syria would be a serious policy and not a media campaign," Iranian state TV quoted Supreme Leader Ayatollah Ali Khamenei as saying. Khamenei has the final say on all state matters.

Syrian Foreign Minister Walid al-Moallem told Lebanon's Al-Mayadeen TV on Tuesday that Syria would place its chemical weapons in the hands of representatives of Russia, other unspecified countries and the UN. Syria will also declare the chemical arsenal it long denied having, stop producing such weapons and sign conventions against them.

French Foreign Minister Laurent Fabius said Tuesday that the French resolution would demand that Syria open its chemical weapons program to inspection, place it under international control, and ultimately dismantle it. A violation of that commitment, he said, would carry "very serious consequences." The resolution would condemn the Aug. 21 attack and bring those responsible to justice, he said.

The prospect of a deal that could be enforced militarily met swift opposition from Russia, which has provided economic, military and diplomatic support to Assad throughout the two-year conflict.

President Vladimir Putin said the plan could only work if "the American side and those who support the U.S., in this sense, reject the use of force."

In Geneva, a UN commission said Wednesday that it had confirmed at least eight mass killings perpetrated by Assad's forces and supporters and one carried out by rebels over the past year and a half.

Calling all of Syria a battlefield where "massacres are perpetrated with impunity," the UN commission said it was probing nine more suspected mass killings since March. Its latest report updates the commission's work from 2011 until mid-July, stopping short of the Aug. 21 attack.

What has been left unaddressed in the flurry of diplomacy is the broader civil war in Syria, which has already claimed the lives of more than 100,000 people and forced more than 6 million Syrians — nearly a third of the population — to flee their homes.