Foreign Minister Sergei Lavrov on Monday joined the chorus of Russian officials challenging Washington's argument for military intervention in Syria, saying the evidence provided by the U.S. to show the Syrian government's involvement in an alleged chemical attack on civilians was unconvincing.

"It is very strange to hear that speaking recently on this issue my good friend U.S. Secretary of State John Kerry declared that the American party had provided Russians with irrefutable evidence that the regime used chemical weapons but that Russians consciously refused to admit this fact," Lavrov said, Interfax reported.

Lavrov was referring to Kerry's interview on U.S. television channel ABC on Sunday, during which he said the U.S. had "sent people over to Russia who provided evidence" of the Syrian government's involvement in the Aug. 21 attack that was "going to be overwhelming."

"And they [Russians] chose — I literally mean chose — not to believe it or to at least acknowledge publicly," Kerry said. "If the President of Russia chooses yet again to ignore it, that's his choice."

The verbal spat between Russian and U.S. officials is only the latest in an escalating debate over a possible military strike on Syria as Russia warns the U.S. to use diplomatic means rather than force to avoid more civilian fatalities.

After several days of reports of an imminent strike by the U.S., President Barack Obama over the weekend announced a decision to seek congressional approval before launching an attack.

As for the "overwhelming" proof of Syria's involvement in the attack that killed 1,429 people, Lavrov said the U.S. did provide some findings, but they were not specific and did not include geographic coordinates, names or "proof that the tests were carried out by professionals," and therefore were "absolutely unconvincing," AP reported. 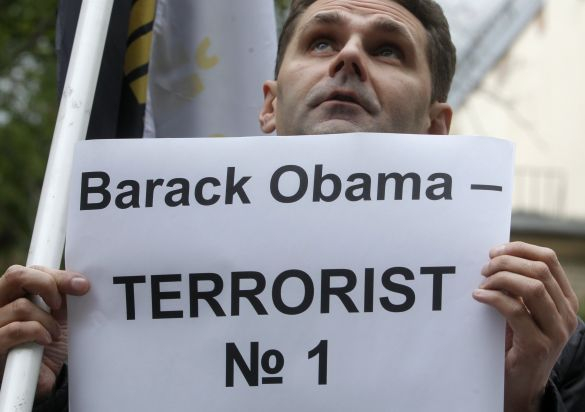 A Russian protester picketing against a possible U.S. military strike against Syria in St. Petersburg on Monday.

China and Syria on Monday also spoke out against a U.S. military strike on Syria, with Syria asking the UN to prevent military intervention.

Russia and China "defend exclusively a solution by way of negotiations" to the Syrian problem, as well as Iranian and North Korean nuclear ambitions, Lavrov told students at the Moscow State Institute of International Relations, state television Vesti reported Monday.

The Foreign Ministry's envoy for human rights, Konstantin Dolgov, said U.S. arguments that a military intervention in Syria was needed in order to protect civilians were "flawed" because  the intervention would only lead to more civilian fatalities, as such interventions in Yugoslavia, Afghanistan, Iraq and Libya proved in the past, Rosbalt reported.

France, however, stuck to its earlier vows to take part in a multilateral military intervention in Syria.

Hong also said the international community must "avoid complicating the Syrian issue and dragging the Middle East down into further disaster," AP reported.

But Elisabeth Guigou, head of the French parliament's foreign affairs committee, on Monday reiterated that her country was willing to engage in a military conflict with Syria along with other countries, Reuters reported.

"In a complicated situation like this, we need to stick to principles, in other words the constitution, which does not oblige the president to hold a vote, nor even a debate," Guigou, a veteran of the ruling Socialist Party, told France Info radio.

A UN inspection team returned from Syria on Saturday with blood and soil samples from the site of the alleged chemical attack. It is unclear how long it will take experts to process the samples, but they will not be able to determine who is responsible for the attack, only whether it was in fact a chemical attack.

The U.S. has said it has proof the attack was carried out by Syrian President Bashar Assad's forces, but Russia has refused to rule out the possibility that rebel forces were responsible.